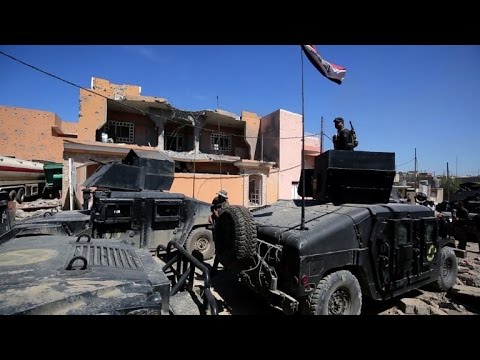 The west has treated ISIL as enemy number one while local actors see it as a sideshow in a political arena stretching from the Mediterranean to Iran. What does the defeat of ISIL in Mosul mean for Iraq?

NurPhoto/SIPA USA/PA Images. All rights reserved. A general view shows a destroyed street of East Mosul, Iraq on 3 April 2017, some 2.5 months after offensive to push Islamic State jihadists out of Mosul. NurPhoto/SIPA USA/PA Images. All rights reserved.The protracted battle against ISIL in Iraq and elsewhere foreshadows numerous challenges in reconstituting the state afterwards. The west has treated the group as enemy number one while local actors see it as a sideshow in a political arena stretching from the Mediterranean to Iran.

Not since the collapse of the Ottoman Empire has there been such a complex and bewildering reordering of the region. At once, everything is on the table, no outcome can be ruled out and paradoxically, the fight against ISIL could equally consolidate Iraq or signal its demise.

Good leaders thrive in times of crisis, as do opportunists. Gamal Abdel Nasser, the charismatic pan-Arab Egyptian leader, would cite Luigi Pirandello’s “Six Characters in Search of an Author,” as a call to write the script for the Arab World’s future. That he had never read the play was irrelevant. Northern Iraq will need similar fiction if not alchemy to prevent its next conflict from appearing even before the ISIL eulogy can be written.

It’s not a case of restoring the status quo-ante; the strategic shifts in recent years have been too dramatic. Sunni atomization, Shi’a dominance and Kurdish fragmentation in Iraq are joined to the fate of its neighbor Syria. What happens there will impact Iraq and what happens in Syria will be primarily determined by Russia, Iran, and Turkey and perhaps, given the Trump administration’s new found interest, the US. These are all new developments.

Iraq’s story post-2003 had as its central concern the question of how to re-integrate the Sunnis into the country’s political life. The US failed to do this as did Sunni leaders. In Dohuk in late 2016 a young Shammari leader from Ninewa remarked bitterly how the Sunni leaders had lost everything, reputation and land. By throwing their lot in with ISIL willingly or not, the Sunni cities and towns have been destroyed while being saved, with Mosul another tragic example.

The Sunni communities have been dispersed as IDPs throughout Iraq, many in Iraqi Kurdistan. When I was in Halabja trying to find the governor’s office, my Kurdish fixer, with no Arabic, spoke to ten dispersed street sweepers who were all IDPs from Anbar, with no Kurdish, before we found our way.

In Iraq’s next elections the Sunni constituency will be of no fixed abode, another nail in the coffin of Sunni political representation. In the newly liberated areas, Sunni tribal leaders ponder how to deal with tribesmen who fought alongside ISIL, and their extended families, who did not. Feudal remedies are often invoked, such as forced relocation and banishment for a generation.

In the past this may have worked for isolated murder cases; but not on this scale. Where will they all go and who will take their land and homes? Regionally, having started a ruinous war in Yemen, the Sunni are also at war with themselves; the pseudo-monarchs of the Gulf fight the Muslim Brotherhood while al Qaeda and ISIL and Ahrar Al-Sham indulge in banal and violent debate over Takfir, the oneness of God, and how and if to confront the Shi’a.

In short, the Sunni east of the Med are not so much the JV team as Obama described ISIL but rather the side that specializes in own-goals.
Shi’a consolidation

The Shi’a political parties emerged dominant in Iraq’s new electoral politics after 2005 and played by the rules, more or less, until Nouri al-Malaki’s second term when he used state resources to his own end and created the conditions for the dramatic entry of ISIL in 2014.

Despite the steady hand of his replacement Haider al-Abadi in trying to bring back an Iraqi state for all, the evolution of the war against ISIL has created new realities, primarily the Hashd al-Shaabi or the Popular Mobilization Units that were regularized in law, if not practice, in November 2016.

After Mosul where will these militia go? One of their commanders in Baghdad’s Green Zone, newly festooned with Shi’a banners, explained their metamorphosis. When they formed the militias in response to Grand Ayatollah Ali al-Sistani’s fatwa to fight ISIL in Ramadi and Fallujah they did so alone.

Now, they are being feted by regional forces and are negotiating security and political files across Iraq’s north with Syria, Turkey, the PKK, the KDP, Iraqi political parties and belatedly, international diplomats. This was a new experience for them and they liked the attention.

Another aspect is the deployment of Iranian Revolutionary Guard (IRG) advisors with some of these units including in Diyala and Kirkuk where they often play visible mediator roles between the Shi’a militia and the Kurdish PUK Peshmerga but where both sides compete for the security allegiance of communities caught in the middle.

In Diyala there are credible reports of ethnic cleansing against the Sunni communities and unverified rumors of forced conversion; long a source of historical tension. But the most visible change in the new Iraq is cultural.

Last November during Arbaeen when the Shi’a faithful gather at the tomb of Imam al-Hussain in Karbala some 22 million converged in southern Iraq drawn from Iran, Iraq, central and south Asia and Africa. Within five years it has become the second largest religious event in the world, dwarfs by ten-fold the annual Hajj in Mecca, Saudi Arabia and continues to grow.
Kurdish fragmentation

Iraqi Kurdistan is often portrayed as the most stable corner of the country but here too the fissures are real. Kurdish support in the war against ISIL and its generous hosting of Sunni, Yezidi and Christian IDPs deserves acknowledgement if not reward. But its institutions, the presidency, parliament and the Peshmerga are dysfunctional or divided and for the first time post-2003 the Kurds are incapable of generating coherent policy.

The colossal mismanagement of their economy has been truly staggering. These trends have been present for some time but post-ISIL they will be starker. A panoply of different factions currently run riot across the Kurdish steppes from Khanaqin to Sinjar and risk invoking the civil war strife of the 1990s and even more blatant involvement from Turkey and Iran.

A misstep on the Syrian border, an ill-timed raising of the Kurdish flag in Kirkuk or a fatal crackdown on Kurdish teachers demonstrating for unpaid salaries in Suleimaniyeh could herald a wider conflagration that was never intended.

So what does all this mean for Iraq after the defeat of ISIL in Mosul?

Firstly, one needs to recognize the scale of the crisis and the new realities of recent years. Secondly, while a Nasser-like figure is not going to emerge to write the script for Iraq’s future, someone has to. Thirdly, throughout my travels in northern Iraq all stakeholders insisted on the need for international tutelage for the day after Daesh.

To be sure this is long haul stuff and one will need to separate the leaders from the opportunists. But it may well be Iraq’s last, best chance and surely the least, worst option.

Peter Bartu teaches political transitions at UC Berkeley and recently returned from three months ethnographic research in northern Iraq looking at transitional governance options after the removal of ISIS from Mosul. In 2008-2009 He spent 18 months in Ninewa, Kirkuk and Diyala working on the disputed internal boundaries between the Arabs and the Kurds.