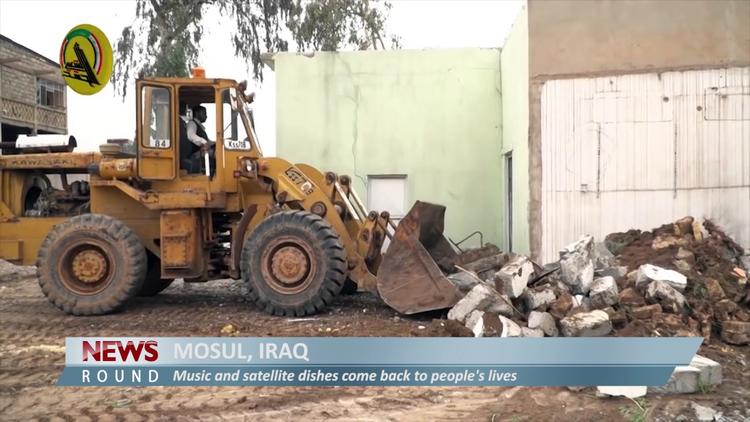 Locals in the parts of Mosul, from which extremists have been pushed out, are celebrating small signs of returning life: For one thing, the chance to pour a glass of water in a well-lit room.

Some hope is returning to the locals in Mosul, after several months of fighting. In some neighbourhoods, running water is once again on tap and power is available at the flick of a switch.

For the last six months, locals have been dealing with a lack of easily accessible water. Although the Tigris river separates the two sides of the city, it has become inaccessible in many places due to fighting – so locals started to dig wells in the urban landscape.

“The lack of services has made it really difficult, despite our happiness at the fact that the IS group have been pushed out of Mosul,” says Tariq Fathi, one of the thousands of people who have stood in queues at wells on the eastern side of the city recently. “We are currently spending around US$20 per month on getting drinking water from Iraqi Kurdistan. That is such a lot of money compared to what we can earn here at the moment. And for people who cannot afford it, they must drink from the wells’ dirty waters.”

Fathi says that many people are afraid of the diseases that may come with using the ground water but that they simply don’t have any choice.

The drilling of wells to access ground water inside the city has become something of a lucrative trade too. Getting a well dug costs around US$700 which means that only wealthy people can afford to pay for it; groups of neighbours also club together to have a well built for their community.

However, Marei Qalanda, of the provincial water authority, says this suffering shouldn’t go on much longer.

“It was a big challenge and we are under-resourced,” Qalanda admits. “But we are on our way to operating at maximum capacity again.”

One of the largest pumping stations, which supplies about 60 percent of the needs of the eastern side of the city, has started operating again, and further work is being done on other pumping stations. However, it will take some time as fighting has damaged pipes and gutters – Fathi and his neighbours have resigned themselves to queueing for water for some time yet.

The other sign of life returning to the city is in the resumption of electricity supply. The local power company estimates that about 50 percent of the distribution network has been damaged, one of the company’s engineers, Ahmad Saeed, told NIQASH.

“Cables and transformers have been damaged by bombs and explosions and hundreds of power poles have been destroyed,” he noted. “Over the past four months we have been trying to fix things. Over the past two weeks we have managed to power up some of the city’s main roads and we are proud of that. It wasn’t even so much a matter of providing people with electricity,” he adds. “We just wanted to send the message that says life is returning to your city. Some neighbourhoods are now getting 12 hours of supply a day.”

Getting the power back on, “was like when the women of the city could take off the veils that the IS group made them wear,” says Mahmoud Salem, a resident of the Hadba neighbourhood in Mosul. “It was like the city removing the darkness that has lasted more than two years.”

There was one other notable event that people in Mosul either heard about or witnessed, that made them feel more optimistic about the future.

Local musicians – Amin Miqdad, who plays violin, and Thamer Khalil, a clarinet player – put on a small concert in the city.

“I often saw the smoke of battle and heard the explosions,” says Miqdad, who spent two years in Mosul under the control of the IS group. “What made me happy was that those who attended the concert were people who are struggling to live here. But for a short time, they were able to turn their backs on war and enjoy the music.”

With any luck, soon they all may also be able to drink a glass of water in a well-lit room of their own.

Iraq Insider: “Music and Satellite return to Mosul after ISIS”