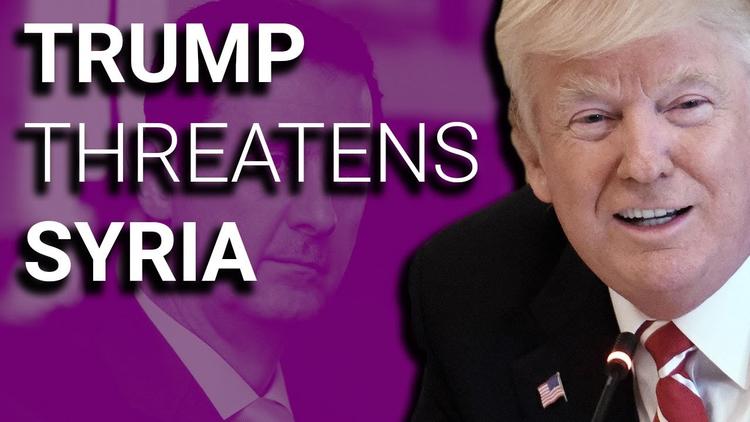 The possibilities for catastrophic miscalculation are skyrocketing in the Middle East, and this administration is proving singularly prone to miscalculation.

The Washington elite is waking up to the increasingly real possibility that the Trump administration may be moving the country into yet another Middle East war. And much more quickly than anyone had anticipated. And through sheer incompetence and incoherence rather than by design.

At the moment, attention is focused on the situation in eastern Syrian, the details of which are spelled out well in a growing number of accounts such as Mohamad Bazzi’s piece in the Atlantic as well as a recent action alert by the National Iranian American Council. In addition, the New Republic’s Jeet Heer posted an excellent piece that quotes former key Obama policymakers (Colin Kahl and Ilan Goldenberg), as well as Sen. Chris Murphy (D-CT), who have been well ahead of other national-security analysts in warning about the gathering storm clouds.

Eastern Syria is indeed the focus of the moment, particularly since a U.S. fighter jet shot down a Syrian warplane in Syrian territory and Iran launched a mid-range missile attack on an Islamic State (ISIS or IS) target. Russia subsequently warned that it will target U.S.-led coalition aircraft flying in Syrian territory west of the Euphrates. Then, on June 20, an Iranian-made drone was shot down close to the border with Iraq and Jordan where the various rival proxy forces are all converging to fill the vacuum in anticipation of the IS collapse.

No doubt the Pentagon is gaming out the various scenarios in which a wider war could soon break out, but it certainly sees Iran and its allies in the area as the main post-ISIS threat to Washington’s interests in and around Syria. See, for example, this little memo published recently by a senior policy adviser to the U.S. Central Command and, remarkably, a visiting fellow at the staunchly pro-Israel Washington Institute for Near East Policy (hat tip to Barbara Slavin). Or this helpful new contribution by WINEP’s long-time counselor and “Israel’s lawyer,” Dennis Ross.

Although the fireworks in eastern Syrian have rightfully captured our immediate concern, they shouldn’t distract too much from the highly volatile situation in the Persian Gulf following both the stunning ISIS terrorist attack in Tehran on June 7 — which senior Iranian officials blamed on Saudi Arabia — and the weeks-old crisis in the Gulf Cooperation Council (GCC) between Saudi Arabia, the United Arab Emirates, and Bahrain on the one hand and Qatar (backed by Turkey and Iran) on the other. Although Tehran justified its unprecedented missile strike by Iran’s Islamic Revolutionary Guard Corps (IRGC) in eastern Syria as retaliation for the terrorist attacks, it was also widely interpreted as a shot across the bow of the most anti-Iranian GCC states to remind them of their own vulnerability if war breaks out either in the Gulf or elsewhere.

In this context, the recent announcement by Riyadh that its navy had seized an explosives-laden boat and three members of Iran’s Islamic Revolutionary Guard Corps (IRGC) allegedly planning to blow up a Saudi offshore oil drilling rig does not bode well. According to The New York Times, the incident occurred when Iran’s state media reported that Saudi border guards fired on boats belonging to “simple fishermen,” killing one of the occupants. The Saudis reported some details of the incident over that weekend, but only on the following Monday did it come out with its new and far more sensational account.

That incident may of course be relegated to less than a footnote in the region’s history. But it nonetheless suggests that things are not moving in a favorable direction and that whatever behind-the-scenes attempts at defusing tensions — whether between Saudi Arabia and Iran or, for that matter, Qatar — are not bearing much fruit. Of course, charges by Bahrain and the Saudis that Iran is constantly shipping weapons and terrorists to Yemen and other Gulf Arab destinations are nothing new. But, in the current atmosphere, the risks of an incident escalating out of control seem higher than ever.

Moreover — and this is the main point — the possibilities for catastrophic miscalculation are skyrocketing. It’s not just the proximity of rival armed forces in both eastern Syria and the Gulf. It’s also the lack of direct communication among key parties and the lack of clarity as to their actual policies.

That applies in spades to what passes for the Trump “administration.”

Take, for example, the Saudi-led blockade of Qatar, which came just two weeks after the president’s visit to Riyadh — and which Trump not only applauded but initially appeared to claim credit for in his tweets.

Clearly, the Saudis, the Emiratis, and the Bahrainis had come to believe that Trump — even if he had not explicitly greenlighted such a drastic action during or after Riyadh summit — would support them against Doha. How shocked they must have been when the Pentagon and the State Department immediately voiced their reservations (not to say, their opposition)!

Almost as shocked as Secretaries Mattis and Tillerson and National Security Adviser McMaster must have been when they first heard about Trump’s tweets. Here’s what the State Department spokesperson — to the extent you believe she speaks for the “administration” — said about Riyadh’s and Abu Dhabi’s action:

Now that it has been more than two weeks since the embargo started, we are mystified that the Gulf States have not released to the public, nor to the Qataris, the details about the claims that they are making toward Qatar. The more that time goes by the more doubt is raised about the actions taken by Saudi Arabia and the UAE.

At this point we are left with one simple question: were the actions really about their concerns regarding Qatar’s alleged support for terrorism or were they about the long, simmering grievances between and among the GCC countries?

Assuming the State Department really speaks for the US government, this rather stunning statement begs a host of rather critical questions. How exactly did the Saudis and their allies come to think that Washington would support them? Who exactly gave them that impression and under what circumstances? Or are Saudi Crown Prince Mohammed bin Salman (MbS) and UAE Crown Prince (and apparent MbS mentor) Mohammed bin Zayed bin Sultan Al-Nahyan (MbZ) so deluded or hubristic that they just assumed that Washington, including the Pentagon, was on board with this?

And, if so, how prone to miscalculation are they in this moment of sky-high regional tensions?

After all, MbS has risen in influence in Saudi Arabia largely because of his pet foreign policy project, the war in Yemen, which, according to the latest reports, hasn’t been going particularly well (unless his original idea was to completely destroy the Arab world’s poorest country). He now finds himself in a very difficult spot.

Moreover, the Saudi king just elevated the hyper-ambitious MbS to crown prince overnight, placing him next in line in the royal succession. Like Trump, the 31-year-old is falling upward more through sheer audacity than palpable successes. Unless in his new exalted position he can somehow still impose his will on Qatar — an increasingly doubtful prospect in the absence of U.S. and Western diplomatic support — MbS looks ever more like a two-time loser (in Trumpspeak), and an extremely reckless one at that. And that perception makes him even more dangerous under the circumstances.

How is all this perceived in Tehran, where various competing factions may also be prone to miscalculation? What do they think U.S. policy is?

They know the Trump “administration” is united in its conviction that the Islamic Republic is irredeemably hostile to the U.S., but they also know there are degrees of difference among senior officials. Some White House officials reportedly favor “regime change” via covert action, and it was just a few days before the ISIS attack in Iran that it was disclosed that the CIA had picked Michael D’Andrea (aka The Dark Prince or Ayatollah Mike), a particularly aggressive covert operator, to run the agency’s Iran program.

Tehran was also deeply offended by Trump’s shocking reaction to the June 7 terrorist attack and further taken aback by Tillerson’s statement of support for a “peaceful transition” of government in Iran one week later. These statements no doubt served to strengthen hardliners in Tehran who already believe the worst about U.S. intentions as well as those of its regional allies.

At the same time, Tehran knows that top officials — notably Mattis (who appears to have been granted virtually unprecedented discretion in military decision-making) and McMaster — are keenly aware of the risks of getting dragged into a war with Iran (or becoming bogged down in Syria) even as they believe Washington should “push back” against Tehran’s “malign” behavior in the region.

And then there’s the commander-in-chief’s own impulsiveness, ignorance, and macho pose. At a moment of crisis a half a world away, Trump may actually welcome some serious fireworks as a useful diversion from his deepening political and legal problems at home. After all, those missiles strikes in Syria back in April gave him something of a reprieve, at least for a few days.

Given the latest head-spinning twist in Washington’s reaction to the KSA/UAE-led Qatar quarantine, it seems quite reasonable to ask how key Iranian policymakers will know who’s running policy in the White House when it’s faced with an incident that escalates quickly, and the Saudis, Emiratis, and Sheldon Adelson are on the phone insisting that Trump’s manhood is on the line? The likelihood of miscalculation by one or more of the major players is virtually certain.

Jim Lobe served for some 30 years as the Washington, D.C. bureau chief for Inter Press Service and is best known for his coverage of U.S. foreign policy and the influence of the neoconservative movement. Giulia McDonnell Nieto Del Rio is a rising senior at Williams College in Massachusetts. She has written and worked for the human rights NGO Cultural Survival in Cambridge, Massachusetts and is currently an intern for LobeLog at the Institute for Policy Studies.

Via Foreign Policy in Focus) | First published in Lobelog