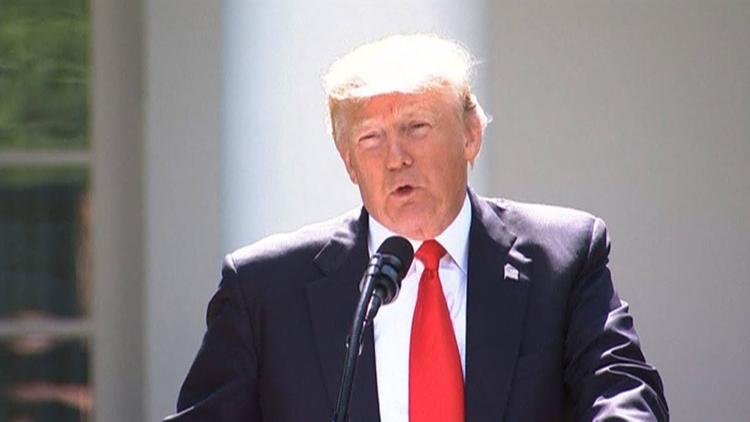 Even before the Paris Agreement was signed in December 2015, market forces and policy measures were starting to tilt the world toward a lower-carbon future. U.S. carbon dioxide emissions peaked in 2007, and Chinese emissions may have peaked in 2014. Solar energy, wind and energy storage are expanding rapidly.

Yet as a climate scientist and a climate policy scholar, I know market forces and current policies are far from adequate to limit the rise in global temperatures, as envisioned in the Paris Agreement.

And so the Trump administration’s decision to withdraw from the Paris Agreement could have a range of consequences for the United States and for humanity. But how broad will these impacts be?

Part of the uncertainty stems from how the climate system will respond to humanity’s greenhouse gas emissions. If we are lucky, the climate will be less sensitive than scientists think is most likely; if we are unlucky, it will be more sensitive. But most of the uncertainty arises from how the 194 other signatories of the Paris Agreement and the global economy will respond to Trump’s decision.

The Paris Agreement’s long-term goal is to limit global warming to 1.5 to 2.0 degrees Celsius (2.7 to 3.6 degrees Fahrenheit) above preindustrial temperatures, or about 0.5 to 1.0 degrees C (0.9 to 1.8 degrees F) above the current global average temperature.

Current policies in the U.S., even without the power plant regulations proposed by the Obama administration, are adequate to reduce greenhouse gas emissions to about 16 percent below 2005 levels by 2020. But significant new policies at the federal and state level are necessary to meet the U.S. commitment under the Paris Agreement to lower its emissions to 26 percent to 28 percent below 2005 levels by 2025. Largely independent of Trump’s decision to withdraw from the Paris Agreement, his obstruction of federal policy to cut greenhouse gas emissions means these targets are not likely to be met.

Meanwhile, however, China and Europe appear to be ready to take up the mantle of climate leadership that the U.S. is abdicating. And so if the U.S. departure from the Paris Agreement does not disrupt international progress, then Trump’s move may prove largely symbolic. (Indeed, under the terms of the Paris Agreement, the departure will not take effect until November 4, 2020 – a day after the next presidential election.) Nonetheless, U.S. industry may suffer and the U.S. reputation as a reliable diplomatic partner certainly will.

But the planet will not notice much. Over the five years between 2020 and 2025, the U.S. will emit a total of about 2.5 billion more tons of carbon dioxide-equivalent greenhouse gases than it would if it got on a path to meet its 2025 goal. That’s about the same as a 6 percent increase in one year’s worth of global carbon dioxide emissions.

Until recently, the federal government used an estimate of the social cost of carbon dioxide – one way to calculate the damage caused by climate change – of about US$40/ton. Based on that estimate, the additional emissions caused by the U.S. failing to meet its Paris commitment would cause about $100 billion of damage to the global economy – not an insignificant number, but small in comparison to the size of the global economy. If state governments in California and elsewhere pick up some of the slack left by federal abdication, as some governors are pledging they will, the damage will be less.

If, after Trump, the U.S. rejoins a healthy global climate regime and shifts with a few years’ delay on to an emissions trajectory consistent with Paris’ long-term goals, then the climate will not be much harmed by any transient U.S. lethargy. The main damage will have been to U.S. leadership, in the clean energy industry and in the world at large.

However, the Paris Agreement would not have happened without U.S. leadership. Perhaps, despite the efforts of China and Europe, it will fall apart without the U.S.

President Trump has talked often about reopening coal mines. This is unlikely to happen without significant subsidies – coal is in general no longer competitive as an electricity source with natural gas or, increasingly, solar or wind energy.

But if Trump’s vision of a “canceled” Paris Agreement and booming coal economy were to be realized, an analysis my colleagues and I did shows that the costs to the U.S. could be severe. As I wrote in August:

Sea-level projections by the Intergovernmental Panel on Climate Change (IPCC), by our research group and by others indicate that global average sea level at the end of the century would likely be about 1-2.5 feet higher under the Paris path than in 2000.

Emerging science about the instability of the Antarctic ice sheet suggests it might be around three to six feet higher – or even more – under the Trump trajectory. And, due to the slow response of the ocean and ice sheets to changes in temperatures, the Trump trajectory would lock in many more feet of sea-level rise over the coming centuries – quite possibly more than 30 feet.

Quantitative risk analyses show that warming would impose costs on human health, on agriculture and on the energy system. It would increase the risk of civil conflict globally. And rising seas would reshape coastlines around the U.S. and around the world.

The pessimist’s case assumes that future catastrophes will come from the climate and its effects. The ultra-pessimist looks elsewhere.

The Paris Agreement is a milestone agreement within a cooperative system of global governance in which organizations like NATO, the United Nations and the European Union play key roles – a system which some of President Trump’s key advisers seek to undermine.

If isolationist policies, including pulling out of the Paris Agreement and weakening the Western alliance, lead to a global trade war and thence to an economic depression, the shutdown of significant chunks of the economy could lead to a larger reduction in greenhouse gas emissions than any careful, deliberate decarbonization policy.

The U.S. saw a small version of this between 2007 and 2009, when the economic downturn was the primary driver of a 10 percent drop in U.S. emissions. Most economic models, including those used to produce projections of future greenhouse gas emissions, are not capable of modeling abrupt changes such as these.

Ironically, Trump’s decision to withdrawal from global governance, including the Paris Agreement, would in this scenario lower emissions. But global depression is one of the most harmful ways possible to do that – one that would inflict great hardship on the American workers Trump purports to help.