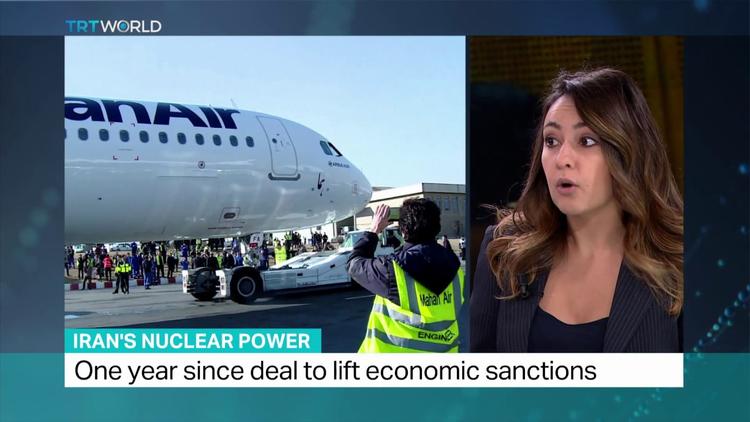 WASHINGTON, (IPS) – Iran hawks suddenly have a new mantra: the Islamic Republic is the Soviet Union in the late 1980s, and the Trump administration should work to hasten the regime’s impending collapse.

It’s not clear why this comparison has surfaced so abruptly. Its proponents don’t cite any tangible or concrete evidence that the regime in Tehran is somehow on its last legs. But I’m guessing that months of internal policy debate on Iran has finally reached the top echelons in the policy-making chaos that is the White House these days. And the hawks, encouraged by Secretary of State Rex Tillerson’s rather offhand statement late last month that Washington favors “peaceful” regime change in Iran, appear to be trying to influence the internal debate by arguing that this is Trump’s opportunity to be Ronald Reagan. Indeed, this comparison is so ahistorical, so ungrounded in anything observable, that it can only be aimed at one person, someone notorious for a lack of curiosity and historical perspective, and a strong attraction to “fake news” that magnifies his ego and sense of destiny.

This new theme seemed to have come out of the blue Tuesday with the publication on the Wall Street Journal’s comics—I mean, op-ed—pages of a column entitled “Confront Iran the Reagan Way” by the South Africa-born, Canada-raised CEO of the Likudist Foundation for Defense of Democracies (FDD), Mark Dubowitz. I wish I could publish the whole thing (which is behind a paywall), but a couple of quotes will have to suffice:

In the early 1980s, President Reagan shifted away from his predecessors’ containment strategy toward a new plan of rolling back Soviet expansionism. The cornerstone of his strategy was the recognition that the Soviet Union was an aggressive and revolutionary yet internally fragile regime that had to be defeated.

Reagan’s policy was outlined in 1983 in National Security Decision Directive 75, a comprehensive strategy that called for the use of all instruments of American overt and covert power. The plan included a massive defense buildup, economic warfare, support for anti-Soviet proxy forces and dissidents, and an all-out offensive against the regime’s ideological legitimacy.

Mr. Trump should call for a new version of NSDD-75 and go on offense against the Iranian regime.

…the American pressure campaign should seek to undermine Iran’s rulers by strengthening the pro-democracy forces that erupted in Iran in 2009, nearly toppling the regime. Target the regime’s soft underbelly: its massive corruption and human-rights abuses. Conventional wisdom assumes that Iran has a stable government with a public united behind President Hassan Rouhani’s vision of incremental reform. In reality, the gap between the ruled and their Islamist rulers is expanding.

….The administration should present Iran the choice between a new [nuclear] agreement and an unrelenting American pressure campaign while signaling that it is unilaterally prepared to cancel the existing deal if Tehran doesn’t play ball.

Only six years after Ronald Reagan adopted his pressure strategy, the Soviet bloc collapsed. Washington must intensify the pressure on the mullahs as Reagan did on the communists. Otherwise, a lethal nuclear Iran is less than a decade away.

Dubowitz, who clearly has allies inside the administration, asserts that parts of this strategy are already being implemented. “CIA Director Mike Pompeo is putting the agency on an aggressive footing against [the Iranian regime’s terrorist] global networks with the development of a more muscular covert action program.” Dubowitz predictably urges “massive economic sanctions,” calls for “working closely with allied Sunni governments,” and argues—rather dubiously—that “Europeans …may support a tougher Iran policy if it means Washington finally gets serious about Syria.” As for the alleged domestic weaknesses of the regime, let alone its similarity to the USSR in its decline, he offers no evidence whatever.

I thought this was a crazy kind of one-off by FDD, which, of course, houses former American Enterprise Institute (AEI) Freedom Scholar Michael Ledeen, who has been predicting the imminent demise of the Islamic Republic—and Supreme Leader Khamenei—for some 20 years or so. Ledeen also co-authored former National Security Adviser Michael Flynn’s bizarre 2016 autobiography and no doubt tutored the NSC’s 31-year-old intelligence director, Ezra Cohen-Watnick, whose conviction that the regime can be overthrown has been widely reported.

But then a friend brought to my attention a short piece posted Wednesday on The Washington Post’s website by Ray Takeyh, a Council on Foreign Relations Iran specialist who in recent years has cavorted with Dubowitz and FDD and similarly inclined Likudist groups, notably the Jewish Institute for National Security Affairs (JINSA). Entitled “It’s Time to Prepare for Iran’s Political Collapse,” it also compared Iran today with the Soviet Union on the verge.

Today, the Islamic republic lumbers on as the Soviet Union did during its last years. It professes an ideology that convinces no one. It commands security services that proved unreliable in the 2009 rebellion, causing the regime to deploy the Basij militias because many commanders of the Revolutionary Guards refused to shoot the protesters.

…Today, the Islamic republic will not be able to manage a succession to the post of the supreme leader as its factions are too divided and its public too disaffected.…

The task of a judicious U.S. government today is to plan for the probable outbreak of another protest movement or the sudden passing of Khamenei that could destabilize the system to the point of collapse. How can we further sow discord in Iran’s vicious factional politics? How can the United States weaken the regime’s already unsteady security services? This will require not just draining the Islamic republic’s coffers but also finding ways to empower its domestic critics. The planning for all this must start today; once the crisis breaks out, it will be too late for America to be a player.

Once again, actual evidence for the regime’s fragility is not offered. Indeed, although he claims that the 2009 “Green Revolt” “forever delegitimized the system and severed the bonds between state and society,” he fails to note that May’s presidential election resulted in a landslide win for President Hassan Rouhani with 73 percent voter turnout, or that reformist candidates swept the local council polls in most major cities, or that the leader of the reformist movement, leaders of the Green Movement, and prominent political prisoners encouraged participation. Nor does he address the question of whether Washington’s intervention in Iran’s internal politics—in whatever form—will actually help or harm efforts by the regime’s “domestic critics” to promote reform, particularly in light of the recent disclosures of the extent and persistence of U.S. intervention in the events leading up to and including the 1953 coup that ousted the democratically elected prime minister, Mohammad Mossadeq. Or whether last month’s terrorist attack by ISIS in Tehran might have strengthened the relationship between society and state.

This is not to deny that the regime is both oppressive and highly factionalized, but why is it suddenly so vulnerable—so much like the Soviet Union of the late 1980s—compared to what it was five or ten or 20 or 25 years ago? Only because Khamenei is likely to pass from the scene sooner rather than later? That seems like a weak reed on which to base a policy as fraught as what is being proposed.

Again, I’m not sure that this Iran=USSR-at-death’s-door meme is aimed so much at the public, or even the foreign-policy elite, as it is toward the fever swamps of a White House run by the likes of Steve Bannon or Stephen Miller or Cohen-Watnick. But here’s why a little more research into the new equation really got my attention.

Dubowitz’s article, it turns out, was not the first recent reference. The most direct recent reference was offered by none other than former Sen. Joseph Lieberman, who incidentally is one of three members of FDD’s “Leadership Council,” in a speech before none other than the annual conference of the Mojahedin-e Khalq (MEK) and its cult leader, Maryam Rajavi, outside Paris July 1. Seemingly anticipating Takeyh (plus the Rajavi reference), Lieberman declared:

Some things have changed inside Iran, and that’s at the level of the people. You can never suppress a people, you can never enslave a people forever. The people of Iran inside Iran have shown the courage to rise up… To just talk about that, to just talk about that, to hold Madam Rajavi’s picture up in public places, is a sign of the unrest of the people and the growing confidence of the people that change is near. The same is true of the remarkable public disagreements between the various leaders of the country…It is time for America and hopefully some of our allies in Europe to give whatever support we can to those who are fighting for freedom within Iran.

He then went on, “Long before the Berlin Wall collapsed, long before the Soviet Union fell, the United States was supporting resistance movements within the former Soviet Union”—an apparent reference, albeit not an entirely clear one — to the Reagan Doctrine and its purported role in provoking the Communist collapse.

And, in a passage that no doubt expressed what at least Dubowitz and his allies think but can’t say publicly at this point:

The Arab nations are energized under the leadership of King Salman and Crown Prince [Mohammed] bin Salman. [Saudi Prince (and former intelligence chief) Turki Al Faisal Al Saudi addressed the “Free Iran Gathering” just before Lieberman.] They’re more active diplomatically and militarily as part of a resistance against the regime in Iran than we’ve ever seen before. And of course for a long time the state of Israel, because its very existence is threatened by the regime in Iran, has wanted to help change that regime. So you have coming together now a mighty coalition of forces: America, the Arab world, and Israel joining with the Resistance, and that should give us hope that we can make that [regime] change.

Putting aside the question of just how popular or unpopular Madam Rajavi is in Iran for a second, there are a number of truly remarkable things about Lieberman’s speech. How much will it help “the resistance” in Iran to be seen as supported by the Saudis and the “Arab nations?” And how will it help to boast about Israel’s assistance when most Iranians already appear to believe that the Islamic State is a creation of the Saudis and/or Israel? Is there any “mighty coalition” more likely to permanently alienate the vast majority of Iranians? Is it possible that the MEK has become an IRGC counter-intelligence operation? It’s very clear indeed that the group is lobbying heavily—and spending lavishly—to become the administration’s chosen instrument for achieving regime change. But advertising Saudi and Israeli support for the enterprise will likely make that goal more elusive. The MEK’s reputation in Iran was bad enough, but this is really over the top.

Lieberman no doubt received ample compensation for saying what he said. Other former prominent US officials, including John Bolton, Rudy Giuliani, and Gen. Jack Keane—all of whom probably have closer ties than Lieberman to the White House – also spoke at the MEK event, which, incidentally, makes me think that the White House is indeed seriously considering supporting the group as at least one part of its Iran policy. I suspect we’ll find out soon enough.