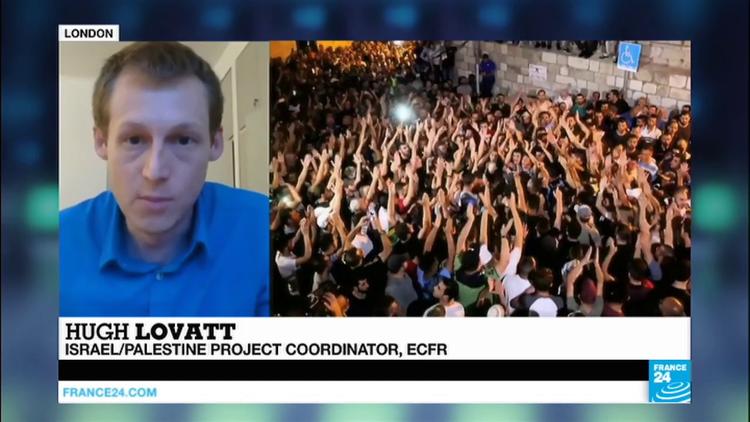 JERUSALEM (Ma’an) — Members of the Waqf, or Islamic trust, in charge with running Al-Aqsa Mosque compound, called on Palestinians in occupied East Jerusalem to close all mosques in the neighborhoods on Friday and for prayers to take place in front of the gates of Al-Aqsa Mosque compound in rejection of unprecedented Israeli security measures at the holy site.

Sheikh Azzam al-Khatib, head of the Islamic Trust and Al-Aqsa Mosque Affairs, said that the department issued a decision to all speakers of the mosques in East Jerusalem not to hold prayers at their local sites, but to head to Al-Aqsa instead.
Large solidarity actions are expected on Friday against Israel’s installation of metal detectors at the gates of Al-Aqsa on Sunday following a deadly shoot-out at the compound two days prior. Clashes have been ongoing near the holy site since, while religious leaders have encouraged Palestinians to refuse entrance into the mosque until the metal detectors are removed.

Hundreds of Palestinians have instead performed prayers outside of the Al-Aqsa Mosque compound. On Thursday evening, hundreds of Palestinians performed Maghreb prayers on streets outside of the holy compound after Israeli forces refused to allow Palestinians into the area except through gates that have been installed with metal detectors.
Al-Khatib warned Israeli authorities from following through with plans of installing the metal detectors at all of Al-Aqsa’s gates and demanded an end to such policies that “harm world peace.”
He also noted that the head and employees of the Islamic Trust were following up on incidents at Al-Aqsa, and calculating the damages done to the mosque and its facilities after Israeli forces had raided the mosque on Friday and closed it for more than two days to Muslim worshippers, a move which rights groups have deemed a violation of international law and a form of “collective punishment.”

A spokesperson for the Greek Orthodox Patriarchate in Jerusalem, Issam Musleh, also said that “we will not give up on each other under these circumstances at Al-Aqsa Mosque.”
Musleh stated that Israeli policies represented violations and “assaults” on Al-Aqsa, and added that Israel was attempting to repeat what happened at the Ibrahimi Mosque in Hebron.
Following the Ibrahimi Massacre in 1994, Israeli authorities divided the mosque in half, splitting it into a synagogue for Israeli settlers and a mosque for Palestinians.
Palestinians have long accused the Israeli government of using Israeli-Palestinian violence and tensions as a means of furthering control over important sites in the Palestinian territory. To this day, Palestinians in Hebron must pass an Israeli-installed checkpoint in order to access the Ibrahimi Mosque.

In a statement Tuesday, PLO Executive Committee Member Hanan Ashrawi said the metal detectors and new security cameras at the mosque were only the latest example of “Israel’s unbridled violations” that “constitutes a flagrant violation of the rights and freedoms of Palestinian Muslim worshipers.”
“Such intrusive and dehumanizing practices aim to provide Israel with carte blanche to exercise security control over the holy sites of Jerusalem… Undoubtedly, Israel is deliberately creating and escalating a situation of instability, insecurity and violence; with its recent escalations, the Israeli occupation is not only provoking the Palestinians, but the entire Muslim world and the international legal system,” she wrote.
She highlighted an Israeli bill that aims to amend Israeli basic law to “prohibit the division of Jerusalem city,” in any future Israeli-Palestinian peace deal. “If passed, this law would destroy the two-state solution by creating an illegal Israeli and Jewish exclusivity over all of Jerusalem,” she said.

“Such proposed legislation builds upon a long series of racist laws, proposals, and practices that reflect Israel’s intent to wipe out the Palestinian presence in Jerusalem, destroy the territorial contiguity and demographic presence of the West Bank (including East Jerusalem), and to impose a de facto one-state solution.”
Following Israel’s occupation of East Jerusalem in 1967, Israel has maintained a compromise with the Islamic trust that controls the Al-Aqsa Mosque compound to not allow non-Muslim prayers in the area. However, non-Muslims are permitted to visit the site during designated times.
Palestinians have long feared that Israel has been attempting to shake up the status quo at the holy site, in the shape of routine Jewish incursions on the site and right-wing Israeli calls to demolish the mosque and replace it with a third Jewish temple.

France 24: “Fatah calls for “Day of Rage” over security measures in Jerusalem”