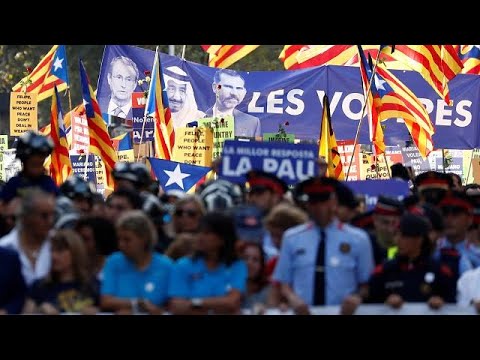 Marchers, on Saturday, displayed signs and banners with various slogans. Some read, “No to Islamophobia,” “The best response: Peace,” and “I’m not afraid.”

Almost half a million people have taken to the streets in the Spanish city of Barcelona to condemn violence following recent terrorist attacks in Spain.

Emergency workers, police officers, firefighters and city officials took to the streets of Spain to promote a message of peace.

Police, in city capital Barcelona, estimates that nearly 500,000 people participated in a march against terrorism on Saturday.

A van had rammed into a group of people in Barcelona on August 17, killing at least 13 and injuring more than 120 others. And, one day later, five terrorists drove a car into pedestrians, one of who died and six others injuries.
King Felipe VI joins the protest for peace in Barcelona. Photo: AFP

Marchers, on Saturday, displayed signs and banners with various slogans. Some read, “No to Islamophobia,” “The best response: Peace,” and “I’m not afraid.”

“We have to say we are not afraid, but you obviously feel it can happen to you at any time and that is scary. But fear cannot beat us and we cannot stand still. We have to show that we keep living, that is what we have to do,” one demonstrator explained.

Smaller rallies were also held in various cities across Spain.