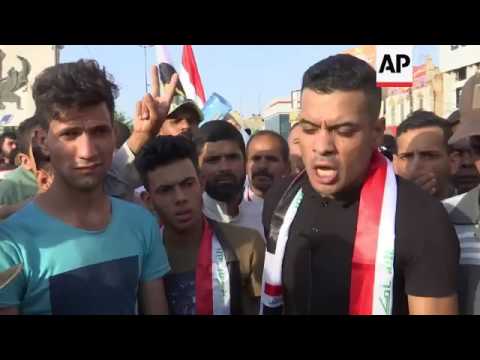 In Iraq, larger political parties disagree on everything except maintaining the status quo: Parliament just passed a law that will badly affect the smaller parties competing in the next elections.

It has been said before. But this time it may well be true: Iraq’s next elections will be the most crucial in the country since 2003.

The last elections were held in 2014 and over the past three years, there have been major developments of all kinds in Iraq, including in politics and security. The long security crisis sparked by the extremist group known as the Islamic State has seen the creation of new political forces in the country, including the Shiite Muslim militias, formerly volunteers but now a formidable military force in their own right, as well as tribe-based militias. At the same time the popularity of those who were prominent as part of Iraq’s business-as-usual, quota-driven political model has declined. The traditional Sunni, Shiite and Kurdish blocs, split along ethnic and sectarian lines, are not as popular with voters as they once were. There are also plenty of new divisions within them.

And most recently Iraqi politicians have been busy passing laws that could change the situation even more.

Over the last ten days, the Iraqi parliament has agreed on many points of a new law to regulate the provincial elections, which sees local councils and governors of Iraq’s various provinces elected. The elections were slated to be held in April of this year but were postponed due to the ongoing security crisis and the presence of the Islamic State, or IS, group in many areas. Now it seems they will be held on the same day as federal elections, in April 2018.

The new legislation will mean that many votes for smaller parties will simply be wasted.

This will be the first time the two kinds of elections have been held together – usually there are two years between each kind of ballot. In the past provincial elections have been considered a good indicator of the popularity of various Iraqi political parties and blocs. Often politicians will correct their course and take different positions as a result of provincial voting, so that they may do better in federal elections.

Meantime the new law provides a challenge of a different kind. There have been complaints that it favours larger parties over smaller ones. Iraq’s smaller parties are often the ones that have been trying to amend Iraq’s existing political system. That mission will not become any easier, thanks to this new legislation.

On August 1, Iraq’s parliamentarians voted that the country would keep using the so-called Sainte-Laguë system, a mathematical formula used to count votes and ascertain representation. The Sainte-Laguë system stops larger parties from gobbling up the votes smaller parties have won, if the smaller parties haven’t won enough votes to pass a certain threshold. Politicians decided the formula should use a divisor of 1.9 to allocate seats. But this is considered high, with most other countries who use this system using a divisor of between one and 1.4. It puts smaller parties at a disadvantage.

This caused so many complaints that the Sadrist party, led by cleric Muqtada al-Sadr and represented in Iraq’s Parliament by the Ahrar bloc, organised demonstrations in central Baghdad. In response to the complaints and the protests, the divisor was lowered to 1.7. But again, this is still high in comparison with other nations and will disadvantage smaller parties.

Opposition parties are still demanding the divisor be lowered further, to 1.4. This opposition includes the Ahrar bloc, the Fadilah, or Virtue, party and the National Accord party. In fact MPs associated with the Sadrist movement and the Ahrar bloc left the hall, in order to try and thwart the legislation by making sure there were insufficient numbers of MPs to vote. Unfortunately their attempt failed.

“The larger blocs insisted on achieving their goals without considering the demands of the people, as expressed at Friday’s protests,” Diaa al-Asadi, a leading member of the Sadrist movement, told NIQASH. “That divisor – 1.7 – will only serve the big parties and it will be a challenge to smaller blocs and smaller parties.”

In an official statement, the Virtue party, which has only six seats in Parliament at the moment, said the new legislation will mean that many votes for smaller parties will simply be wasted.

Forming a new Iraqi government and new provincial councils is going to be more difficult as a result of all this, argues Ziad Ahmad, a local political analyst. In the past forming coalitions and deciding who to appoint and where, had caused long delays, Ahmad says. “This is going to take an even longer time and there will be many tiresome negotiations.”

And there are two other issues that are going to cause headaches when it comes to April 2018.

Iraq’s most senior politicians in Parliament.

The number of constituencies remains up for debate too. Currently the country has 18 constituencies but some say there should be more, to more accurately reflect how many Iraqis live in certain areas. The requirement to get a higher number of votes in some areas than others has seen skewed results, they say – that is, MPs in some areas may only have had a few votes and been voted in, whereas in others, some politicians received thousands of votes yet still were not elected.

Additionally the northern province of Kirkuk remains a major problem. Kirkuk is a disputed territory – that is, the Iraqi Kurdish say it should belong to their semi-autonomous northern region whereas the Iraqis believe it belongs to Iraq proper. Kirkuk is home to a mixture of ethnicities and sects, which makes it hard to discern where the loyalties of the province as a whole lie. There are also major security issues that make it difficult to hold elections in the province.

Kirkuk was a subject discussed by politicians during talks on the electoral legislation. There was no satisfactory conclusion drawn and MPs decided they would simply postpone provincial elections in Kirkuk for another four years.

And then finally, Iraq is currently lacking something else that is essential for the holding of elections: The lack of members on the Independent High Electoral Commission, the body tasked with overseeing elections in the country.

In April, the Iraqi Parliament formed a special commission to start selecting a new council for the Independent High Electoral Commission, or IHEC. It is supposed to be an independent body, separate from other government agencies, and its membership is usually equally distributed between Kurdish, Sunni and Shiite councillors.

Around 500 potential council members were nominated for the nine roles available and four months later, the special commission does not seem to have come very far in working out who those nine are. Iraq’s political parties are jockeying to get their allies and members onto the council and there are also demands that the membership be split along the same ethnic and sectarian lines as previously.

This delay has already seen senior politicians – including the country’s president, Fouad Massoum, the country’s prime minister, Haider al-Abadi and the Speaker of the Parliament, Salim al-Jibouri – call for a deadline for this aspect of the procedure at an early August meeting.

It is important to remember that all of these issues will impact a set of elections that will be crucial to Iraq’s future. The country is slowly emerging from the security crisis started by the extremist IS group. There is no doubt though, that the reconstruction and reconciliation won’t be any easier.