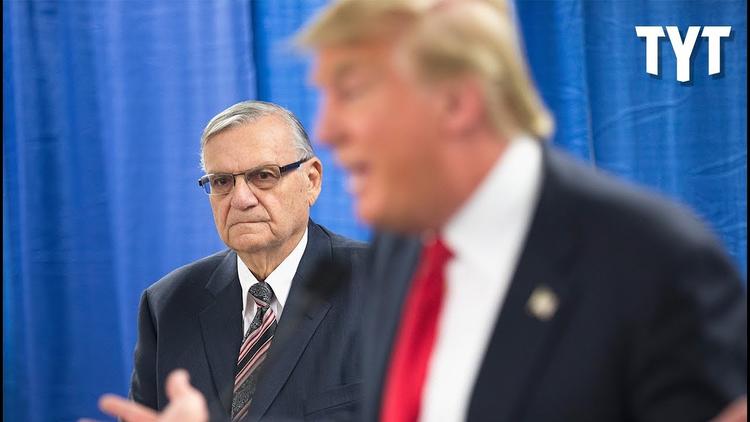 The president called a man who freely violated people’s constitutional rights a “patriot.” What does that make his victims?

During a speech to a group of police officers in July, President Trump returned to one of his favorite themes of the campaign season: violence. “Please don’t be too nice” to the “thugs being thrown into the back of a paddy wagon,” Trump advised the officers. Be “rough.”

The president’s endorsement of police brutality was met with applause from the officers and shock from activists and pundits alike.

Sensing the brewing backlash, the White House insisted that the president was simply making a joke. Even Attorney General Jeff Sessions, the country’s top law enforcement official — a man with his own complicated history of encouraging the worst impulses of the police — attempted to distance himself from the controversy.

Yet the president just proved that when it comes to endorsing police brutality, especially against communities of color, he’s dead serious.

For more than 20 years, Sheriff Joe Arpaio of Maricopa County, Arizona terrorized Latino communities, harassed immigrants, and made life a living hell for prisoners in his care in order to build a reputation as “America’s toughest sheriff”.

These systematic violations of human and constitutional rights eventually landed Arpaio in legal trouble of his own. Then President Trump pardoned him.

Arpaio had been awaiting sentencing for a July conviction of criminal contempt.

Back in 2011, a federal judge ordered Arpaio to stop targeting and detaining Latinos just to inquire about their immigration status. Nevertheless, Arpaio persisted for another 18 months, insisting that his racial profiling was lawful. He emasculated inmates, forcing them to wear pink underwear, and attempted to starve them with food that was called inedible.

He tortured them, too: Beginning in the 1990s, Arpaio opened Tent City Jail, which forced inmates to live outside in the extreme Arizona heat. An untold number of inmates died.

To the law, Arpaio is a convicted criminal who built his career on denying the constitutional and human rights of the most vulnerable among us. To Trump, he’s “a patriot” who kept “Arizona safe.”

“Throughout his time as sheriff,” a White House statement bleated, “Arpaio continued his life’s work of protecting the public from the scourges of crime and illegal immigration.” In other words, the innocent immigrants who were harassed, and the prisoners who were tortured, were the real criminals.

Trump promised to be the “law and order candidate” during his campaign. He codified this promise once he became president in the “Standing Up For Our Law Enforcement Community” section of the White House website. “The Trump administration will be a law and order administration,” it echoed.

For the president, it seems, “standing up” for law enforcement includes allowing officers to subvert the rule of law to commit acts of brutality with impunity. Empowering law enforcement to “keep our streets free of crime and violence” means supporting racial profiling. And “law and order” only applies to some, namely those that support the president.

With Trump’s pardon of Arpaio, a message has been sent: When it comes to police brutality of the kind Arpaio perpetuated for decades, the Trump administration won’t simply be complicit in it. It will promote it.

And that’s nothing to joke about.

TYT: “Joe Arpaio’s Pardon Could Be Reversed By Courts”