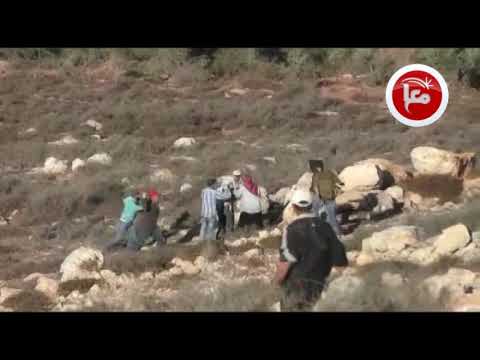 Daghlas added that Israeli settlers threw rocks and sharp objects and physically assaulted the Palestinians as they were working on their land.

Video of the attack shows the settlers attacking the Palestinians, as an Israeli soldier stand nearby.

He pointed out that the Palestinians had to coordinate with Israeli and Palestinian officials in order to access their land to harvest olives.

An Israeli army spokesperson told Ma’an they were looking into reports.

The Palestinian government has no jurisdiction over Israelis in the West Bank, and violent acts carried out by Israeli settlers often occur in the presence of Israeli military forces who rarely act to protect Palestinian residents.

The majority of settler attacks committed against Palestinians are met with impunity, with Israelis rarely facing consequences for such attacks.

Only 1.9 percent of complaints submitted by Palestinians against Israeli settler attacks result in a conviction, while 95.6 percent of investigations of damage to olive trees are closed due to failures of Israeli police, according to the Israeli human rights group Yesh Din.

Yesh Din, along with Israeli rights group B’Tselem, have previously condemned Israeli authorities for failing to protect Palestinians from settlers violence or investigate attacks, particularly during olive harvest season, when incidents of attacks on harvesters and their olive groves have been a near daily occurrence in past years.