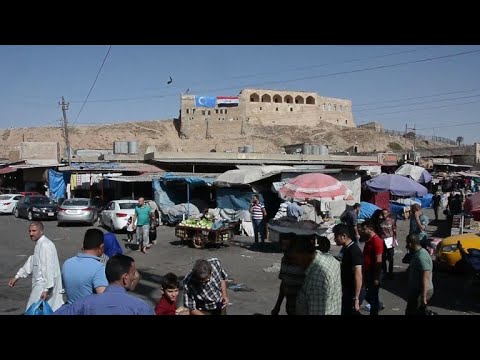 People in the northern city of Kirkuk have lived through a lot, including attacks by the Islamic State. But for many, last weekend was the last straw.

In the middle of the night of October 16, the people of Kirkuk were glued to their televisions and computers. News about Kirkuk was being continuously updated and nobody really knew what was happening. All they knew is that they were hearing about fighting and a possible civil war.

Would the Iraqi government, upset with the fact that the country’s Kurds had held a referendum on independence and possibly had plans to secede from the country, actually go to war with those living in the semi-autonomous northern region of Iraqi Kurdistan?

For a while it looked like they might. At approximately one in the morning on the night of Monday, October 16, there was a confrontation between the Iraqi Kurdish military and Iraqi government forces. More specifically the clash occurred between the special commando forces belonging to Division 70 of the Iraqi Kurdish military with the Kurdish 2nd support battalion and members of the East Tigris troops of the Iraqi army as well as fighters from the Shiite Muslim militias.

“One of our officers refused to withdraw, saying he would die here rather than let them pass. The commander said that if he did not withdraw, he would come down there and kill him, himself. So we withdrew.”

The Iraqi government soldiers were headed towards Kirkuk airport and the Kurdish military, also known as the Peshmerga, was trying to prevent them from getting there.

“We headed to the Taza sub district to try to stop the army and the militias from going to the airport and there was a confrontation near the bridge to the industrial district,” confirms Rasoul Karkui, commander of the Iraqi Kurdish military in Kirkuk; he is also known as Wasta Rasoul. “A violent clash took place and heavy weapons were used.”

However, after only a few hours, orders came from the senior commanders in the Kurdish military that the Kurdish troops should leave the area immediately. The Iraqi army and the Shiite Muslim militias were then able to move onto their destinations without any further issue.

“We were putting up stiff resistance when we got a call from a commander who told us to withdraw,” one of the Kurdish soldiers told NIQASH, speaking on condition of anonymity because he was not authorised to talk to the media. “One of our officers refused, saying he would die here rather than let them pass. The commander said that if he did not withdraw, he would come down there and kill him, himself. So we withdrew.”

Karkui told NIQASH that he and his men also heard that Shiite Muslim militias were attacking other Kurd-controlled areas around Kirkuk, including Bashir, Tal al-Ward, Mullah Abdullah and Maktab Khalid. That was another reason they decided to withdraw.

“We knew we were fighting three big enemies, who had all decided that Kirkuk needed to go back to the way it was before,” Karkui said, referring to Iraq, Iran and Turkey. “We had no other choice,” he said of the withdrawal.

The details remain murky but it appears that a deal had been made on Saturday that the Kurdish troops would withdraw and the Iraqi troops would take their place. This deal was agreed upon by Iraqi authorities and Kurdish politicians and it was apparently brokered by Iranian mediators. Representatives of both of Iraqi Kurdistan’s largest political parties, who rule the semi-autonomous northern region, were there when the deal was done: That is, the Kurdistan Democratic Party, or KDP, and the Patriotic Union of Kurdistan, or PUK. The deal was done only a few hours before the aforementioned fighting started. The meeting was held under the supervision of senior Kurdish politician, Fuad Masum, who is also the president of federal Iraq.

However, both the KDP and the PUK won’t give any further details about any such deal or whether in fact the deal was done at all.

Meanwhile Kurdish soldiers are blaming the politicians. They are asking why they were sent to fight when this agreement was already in place, especially because the fighting led to the deaths and injuries of their colleagues-in-arms. Numbers are hard to get but there are apparently 32 dead Kurdish soldiers, 100 injured and 17 missing in action.

“On the first day of the operation we received orders from the commander-in-chief of the Iraqi armed forces about returning federal authority, and deploying our forces, to certain specific locations,” an Iraqi major general, Ali Fadhil Omran, told NIQASH. “That is contrary to the rumours spread about us that said we came here to kill and torture Kurdish citizens. We won’t stay inside the city,” he added. “And we will hand the city back to province’s police forces.”

On October 17, the day after the withdrawal, the general command of the Iraqi Kurdish military issued statement in which they said the attacks were launched by the Iranian Revolutionary Guard Corps, supported by Iraq’s pro-government forces. The statement also accused some senior members of the Kurdish military of “treason”.

The commander of the 70 division of the Kurdish military, Sheikh Jaafar Mustafa, gave a statement saying that the withdrawal was solely his responsibility and that he had ordered it to save the lives of his men.

After the Kurdish military withdrew, Kurdish citizens of Kirkuk also fled. The drive between Kirkuk and Erbil, the capital of Iraqi Kurdistan, usually takes around one hour. That day it took nine.

“After the Islamic State attacked Kirkuk and despite all of the threats that Kirkuk faced, we always saw a clear direction for the Kurds and a brighter future,” explains Azad Hama Amin, a 37-year-old Kirkuk local who owns an auto accessories store in the city, but who decided to leave for Erbil that day. “But this time, having seen the Peshmerga defeated and officials admit their failures and also leave Kirkuk, we decided it was best we leave the city too.”

“And we can’t return right now,” Amin says, “because we have heard rumours that anyone who voted “yes” in the referendum will be punished and so will members of the security forces.”

Still, the next day a large number of those who had fled their homes in Kirkuk did return. Many said that the Iraqi soldiers and militia members did not treat the returnees badly and that they were generally respectful.

However, some Kirkuki Kurds, who stayed in the city, said that they were insulted and they felt that the Kurdish were disrespected, especially with the removal of the Kurdish flag.

But perhaps this is not so surprising. In March this year Kirkuk’s Kurdish governor, Najmuddin Karim, who has since been dismissed from the post, caused headlines when he raised the Kurdish flag at state-owned buildings around Kirkuk. The city has mixed demographics and locals of Turkman and Arab ethnicity were offended by the governor’s actions. They were also upset by the referendum on Kurdish independence, which many felt had been pushed onto the city. Kirkuk is not actually part of Iraqi Kurdistan – it is one of Iraq’s so-called “disputed territories”. That is, the Kurds believe it is part of their region but Baghdad thinks it is part of Iraq proper. Having said that, the Kurds have been in control of Kirkuk for the past few years, despite a population of mixed ethnicities.

So, it is not surprising that other ethnic groups in the city were happy to see pro-government forces enter Kirkuk, remove the Kurdish flags from public institutions and raise the Iraqi flag again.

“Turkmen and Arabs have every right to celebrate,” Arshad al-Salihi, a senior Turkman politician in Kirkuk, told NIQASH. “The administration and the security forces here were monopolised by the Kurdish officials and the lives of our leaders were never protected. Many of our senior people were assassinated during and after the fight against the Islamic State group.” Al-Salihi adds that he is completely opposed to any kind of punishment of Kurdish locals in Kirkuk.

Although there were some attacks on Kirkuk residents by members of the militias, this didn’t lead to widespread antipathy among locals. In fact, when some Kurds left their homes, their Arab and Turkmen neighbours contacted them to ensure they had arrived safely inside Iraqi Kurdistan and to assure them they were watching out for their houses and property. A lot of locals launched campaigns on social media calling for unity in Kirkuk.

One of the pictures that was particularly widely shared showed a local man writing, in Arabic, on the door of a Kurdish neighbour: “Nobody is allowed to enter the home of my Kurdish brother. This is an order given by his displaced brother, a son of Hawija”.

Hawija is a nearby Sunni Muslim-majority city that was, until very recently, a stronghold for the IS group.

So what happens now? Since the day and night of the withdrawal, the two parties who played a role in it have been trading insults and recriminations. The KDP has used its media channels, Rudaw and Kurdistan24, to spread misinformation and to blame the PUK for collaborating with the Iranians. The PUK has used their channel, Kurd Sat, to ask questions like this: If the withdrawal was made by secret agreement that excluded the KDP, then why were the areas defended by KDP troops, also handed over without a fight?

While the leader of KDP, Massoud Barzani, says that certain persons from a certain party were to blame – it was clear he meant the PUK – military leaders from the PUK have said that Barzani agreed to the troop withdrawal too, but is now denying it.

Meanwhile ordinary Kurds are far from pleased with their political class; there have calls for the politicians, who did this deal in such an underhand, unilateral way, to resign and activists have launched a campaign on social media demanding this.

Whether that happens or not, it is clear that Kirkuk will not be returning to the way it was for the past three years. Right now, the city is calm and ordinary people are waiting to see what will happen.

There is talk of three possible scenarios. Firstly, that the city will remain under the control of federal authorities. Secondly, that the Iraqi Kurdish military will try and take the city back by force, which seems highly unlikely given the current mood. And thirdly, and probably most likely because of the demographic makeup of the city, Kirkuk will come under some kind of joint administration, with both Baghdad and Iraqi Kurdistan playing a role.

In the end, the most unfortunate thing is that those who fell in the fighting were not aware of the secret deal. Kurdish officer, Aziz Ali, who commanded a regiment of the 102nd brigade, spoke to NIQASH last Friday, expressing his concerns about the burning of the Kurdish flag; he perished in the fighting over the weekend.

And other locals who suffered similar losses in the fighting that was all, apparently, for nothing, are very angry. As the crying mother of one of the soldiers killed said at her son’s funeral this week: “If you had reached a deal, then why did you need to burn up our hearts?”