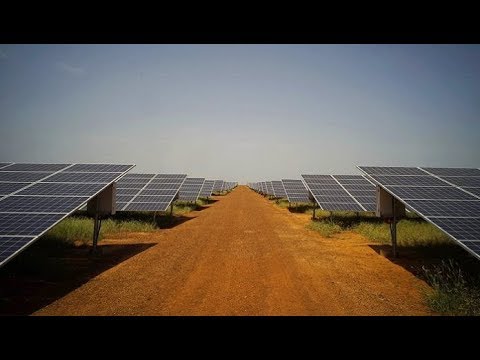 Nearly €340 ($403) billion of investment will be needed to achieve universal access to electricity across Africa by 2030, the World Energy Network forecasts. That is a tall order. The combined grid capacity of the 48 sub-Saharan African countries is around 70 gigawatts, roughly equivalent to that of Spain.

While that €340 ($403) billion target is unlikely to be met, public demand for more access to electricity will stay high. Off-grid energy is one way to plug the gap.

Just under 50% of Kenyans have access to the grid, for example. The average Kenyan ‘off-grid’ household spends over €200 ($237) per year on kerosene, a dangerous and expensive way to generate basic electricity.

One sector that is booming in East Africa is off-grid renewable energy, particularly solar power, and it’s not hard to see why. Sun is plentiful, solar technology is improving and mobile money transfer networks allowing people to pay their bills by mobile phone are far more popular and well-established than bank accounts.

A conference in Cape Town, South Africa, attended by ministers and government representatives of 28 countries, called for increased development of renewable energy, with rural needs being met with grid and off-grid solutions.

The EU has been actively promoting the regional sector for several years. In 2015, the Commission launched an Electricity Access Fund with a view to investing €55m across around 20 regional businesses by 2020.

The European Investment Bank (EIB), relying on capital paid in by the EU’s 28 governments, promised to pay out €10 million of the fund’s capital, which aims to provide access to electricity for one million low-income people. Around 25% of that fund has been paid out so far.

“We are trying to close a deal on two solar projects in Western Kenya,” said Catherine Collin, the EIB’s regional representative.

“Clearly it’s a priority for the bank,” Collin added. “The region is very fortunate to have plenty of renewable energy sources. We would like to do more in the other countries and help them to diversify.”

Solar provider Mobisol, headquartered in Berlin, began its East African operations four years ago in Tanzania. In 2014, it partnered with the European Commission as part of a €6 million funded project aiming to provide solar house systems (SHS) to 49,000 households and to 1,000 schools in Rwanda.

A new public-private fund hopes to bring electricity to a million homes in sub-Saharan Africa by 2025. Access to energy is one of the major factors inhibiting development in the region. EURACTIV France reports.

It’s far from the only player in a rapidly developing market. The Nairobi-based M-Kopa (kopa means ‘borrow’ in Swahili) has been offering ‘pay as you go’ solar energy products since 2012. M-Kopa, which was name-checked by Kenyan President Uhuru Kenyatta during the visit of former US President Barack Obama in 2015, has sold more than 500,000 solar energy sets.

“If you factor in the number of Kenyans living off-grid, then you have a billion dollar business opportunity,” said M-Kopa’s Managing Director, Jesse Moore.

“Product and technological awareness is very high,” added Amenya. “Everybody knows about solar and households are asking for more value in terms of appliances “

Mobisol offers 40, 80, 120 and 200-watt programmes including lighting, TVs and fridges. Its customers pay between 99 Kenyan shillings (€0.70) and 200 ksh (€1.50) per day via their mobile phones for a three or four-year term loan. At the end of the loan payment, they own the system outright.
As Zimbabwe’s homes go solar, its businesses lag behind

With more than 100,000 solar power systems installed in homes in Zimbabwe, according to government figures, off-grid solar power is no longer a revelation for homeowners. But despite decades of power shortages, companies are only starting to catch on.

Aside from providing electricity, pay-as-you-go solar programmes have value as micro-finance initiatives. Most users have no credit history and are often living hand-to-mouth. However, the rate of default on payments is below 10% and the rent-to-own schemes allow them to build a credit score and access to other finance.

“We don’t just sell to you but we walk with you through the life of the loan. The default rate is within expectations. However, we always strive to work with customers to reduce this risk,” explained Amenya.

“The grid penetration is slow at the moment. Kenya has about 6 million unelectrified households,” Amenya told EURACTIV.

He added that Mobisol has already electrified 500,000 homes in East Africa and an announcement is due in the next couple of weeks.
Background

Electricity is a key resource for economic and social development. Basic services like education, sanitation and communication rely on it for lighting in schools, the refrigeration of food and power for modern technologies.

But the United Nations Development Programme (UNDP) estimated in 2005 that 1.6 billion people still had no access to electricity.

Most of these people live in the least economically advanced countries. Over 75% of the populations of around 20 African countries have no access to electricity. This situation is shared in Myanmar, Afghanistan, North Korea, Papua New Guinea and Cambodia.