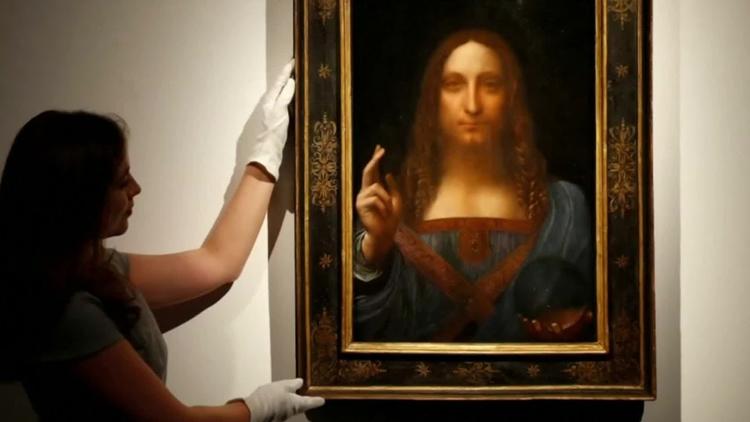 A Saudi prince has been revealed to be the buyer of Leonardo da Vinci’s “Salvator Mundi,” for which he spent $450.3 million. Had he given the money to the poor, as the subject of the painting instructed another rich man, he could have restored eyesight to nine million people, or enabled 13 million families to grow 50% more food.

PRINCETON – Last month, “Salvator Mundi,” Leonardo da Vinci’s portrayal of Jesus as Savior of the World, sold at auction for $400 million, more than twice the previous record for a work of art sold at auction. The buyer also had to pay an additional $50.3 million in commissions and fees.

The painting has been heavily retouched, and some experts have even questioned whether it really is by Leonardo. Jason Farago, a New York Times art critic, described it as “a proficient but not especially distinguished religious picture from turn-of-the-16th-century Lombardy, put through a wringer of restorations.”

The buyer – who many believe to be the Saudi crown prince, Mohammed bin Salman, acting through a distant cousin – has paid a very high price for a painting of a man who is said to have told another rich person: “Go, sell your possessions and give to the poor, and you will have treasure in heaven.” That makes it relevant to ask: what could someone with a spare $450 million do for the poor?

The Life You Can Save, a nonprofit organization that I founded a few years ago, has a Charity Impact Calculator that enables you to see what can be achieved by donations to charities with a proven record of effective aid for the world’s poorest people. It shows that, for $450 million, you could restore sight to nine million people with curable blindness, or provide 13 million families with the tools and techniques to grow 50% more food.

If you want to follow Jesus’s command in a more literal manner, you could simply give the money to the world’s poorest families to use as they wish. A nonprofit called Give Directly will locate the neediest families and transfer your money to them, deducting only 10% for its administrative costs.

In case you think that people receiving such a windfall will spend it on alcohol, gambling, or prostitution, an independent evaluation has shown that they don’t. Give Directly’s cash transfers increase recipients’ food security, mental health, and assets. For $450 million, you could also buy 180 million bed nets, enough to protect 271 million people from malaria. (For all these interventions, the numbers are likely to be somewhat smaller, because the Charity Impact Calculator is not designed for such large sums, and so does not take into account that costs will rise once the needs of those who are easiest to reach have been met.)

When a person chooses to buy “Salvator Mundi”rather than restore sight to nine million people, what does that say about their values? One thing is clear: they cannot care very much about other people. Whatever pleasure they, their family, and friends will get from viewing the painting, it can hardly compare with the benefit that restoring sight provides to one person, let alone many millions.

Rightly or wrongly, most of us do give much more weight to our own interests, and those of our children and other close relatives and friends, than we do to the interests of others. The more distant, and the more different from us, those others are, the higher the rate of discount that we apply in practice.

Yet there is a line at which the discount rate becomes so great, and the interests of others are treated with such indifference, that we must say no, that is going too far. We could argue that most affluent people are on the wrong side of that line. What seems to me unarguable is that to care more about owning a painting than about whether several million people can see is a long way beyond it.

In 2006, the legendary investor Warren Buffett pledged to give most of his wealth – around $30 billion – to the Bill & Melinda Gates Foundation to help people in extreme poverty. That gift – the single biggest gift anyone has ever given to anyone for anything – doubled the resources of the foundation. To mark the tenth anniversary of Buffett’s pledge, Bill and Melinda Gates recently reported to him on what the foundation, together with other organizations, achieved to improve global health over that decade.

The figure that Bill and Melinda Gates highlight is 122 million. That’s the number of children’s lives saved since 1990 by progressive reductions in the rate of child mortality. In other words, if the rate of child mortality had remained constant between 1990 and today, 122 million more children would have died than did in fact die over that period.

Perhaps the biggest contribution that the Gates Foundation made to that decline was pledging $750 million to establish the Global Alliance for Vaccines and Immunization (now known as Gavi, the Vaccine Alliance), a public-private initiative that works with governments and United Nations agencies to improve the rate of vaccination in poor countries and foster the development of new vaccines. Now 86% of the world’s children receive basic vaccines – the highest rate ever.

The Gateses claim that every dollar spent on childhood immunization yields $44 in economic benefits, including the money that families otherwise lose when a child gets sick and a parent cannot work. Warren Buffett’s contribution to immunizations may be the best investment he has ever made.

What do you think would make a person happier? Owning a painting – even if it were the most marvelous painting in the world – or knowing that you had kept millions of children healthy, saving lives and benefiting families economically at the same time? Both common sense and psychological research suggest that it isn’t owning the painting.

Peter Singer is Professor of Bioethics at Princeton University and Laureate Professor at the University of Melbourne. His books include Animal Liberation, Practical Ethics, The Ethics of What We Eat (with Jim Mason), Rethinking Life and Death, The Point of View of the Universe, co-authored with Katarzyna de Lazari-Radek, The Most Good You Can Do, Famine, Affluence, and Morality, One World Now, Ethics in the Real World, and, most recently, Utilitarianism: A Very Short Introduction, also with Katarzyna de Lazari-Radek. In 2013, he was named the world’s third “most influential contemporary thinker” by the Gottlieb Duttweiler Institute.