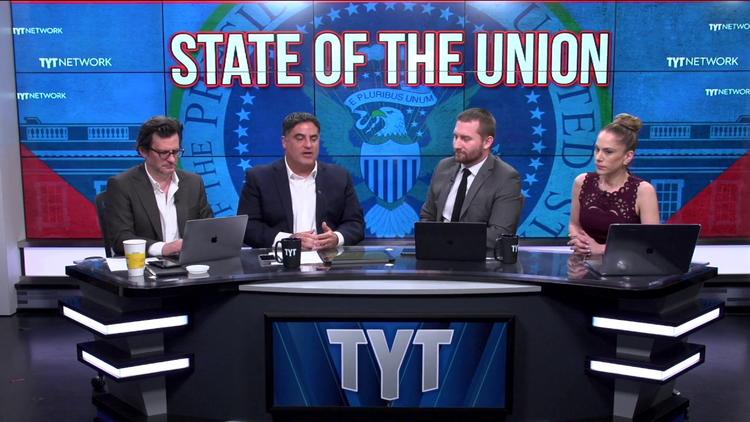 Trump’s State of the Union address had all the elements of fascism except brownshirts marching in the street beating people up (and he veered toward even that in his praise of the Klan and Neo-Nazis at Charlottesville).

Fascism pretends to incorporate the good of the masses (hence the phony Nazi claim on the word “socialism”) while in fact acting in barracuda fashion solely for the benefit of the corporations and elite. It is plutocracy dressed up as a mass movement. Its rhetoric separates out the good workers (white, native-born) from the bad workers (brown or black or Semite, immigrant) in hopes of setting them against one another, for the benefit of the rich spectators. Fascism separates out the poor (about 15 percent of Americans) as lazy burdens on the other workers and enacts punitive policies toward them. Thus, Trump portrays taking away health care insurance from 26 million people as a triumph for workers.

Trump said, “For decades, open borders have allowed drugs and gangs to pour into our most vulnerable communities. They have allowed millions of low-wage workers to compete for jobs and wages against the poorest Americans. Most tragically, they have caused the loss of many innocent lives.”

But the borders haven’t been open. Obama deported an average of 400,000 people a year (more than Trump did in 2017). There was a problem with border monitoring in the 1980s and 1990s, but that has largely been rectified. More Mexicans have been going to Mexico from the US than have been coming here in the past decade. Immigrants have lower rates of crime than the native-born because they don’t want to risk deportation. Most immigrants do not compete with low wage American workers because they occupy different niches and immigrants often lack English language skills.

Americans murdered 17,250 other Americans in 2016. Almost none of the perpetrators was an undocumented immigrant, contrary to the impression Trump gave. Where the race of the perpetrator was known in 2016, about 30% were white and 36 percent were black; less than 2 percent were known to be of another ethnicity. But Trump foregrounded murders by immigrants. Homicide tracks pretty closely with poverty, not with race. Back in 1991 before the big wave of immigration about which Trump complains, Americans murdered 25,000 people. So millions of immigrants coming here in the past 30 years has resulted in a dramatic fall in the murder rate.

But fascism also depicts a united nation sacrificing for the good of all, where “all” means the corporations and substantial groups within the nation are treated punitively. Thus Trump began his harangue by praising American heroism in the face of last years wild fires and floods. None of his examples came from Puerto Rico (though he mentioned it once), which was worst hit and where a third of people still don’t have electricity.

What Trump carefully avoided saying is that these disasters were made worse by man-made release of carbon dioxide into the atmosphere. CO2 is a heat-trapping gas that interferes with the sun’s heat radiating back out into space after it hits the earth. Carbon dioxide is like a malfunctioning electric blanket that you wrap yourself up with in winter to stay warm but which then goes haywire and starts burning you and you can’t get it off you. CO2 is a poison gas. If you turn on your car in your garage and let its exhaust fill up the place and sit in your car with the garage door closed, what do you think will happen to you?

Trump also just flat-out lies about the economy. The growth in gross domestic product during his first year was anemic and Obama had recent better years. Foreign Direct Investment in the United States fell in 2017. Tourism fell by 4%, in large part because of Trump’s fascist immigration policies and the jackboot way they were announced. Research universities and government science departments were virtually under siege, with some scientists fleeing the country. Technological innovation is threatened by his visa policies (not to mention the reputation of the US). Europe’s economic growth was better at 2.6% than Trump’s USA in 2017 at 2.3 percent. Growth often exceeded 3% under Obama, though it was down in 2016.

Trump portrayed a federal tax cut in which a few ultra-wealthy people took home extra millions or billions of dollars as a victory for workers, who on average (if you take e.g. blue collar workers as the basis for the average) will take home almost nothing extra. He and his boosters keep touting the rising stock market. Some 50% of the US population has nothing to do with the stock market. Many of the rest benefit from it only in their retirement accounts, the money in which many of them will never see because the companies they work for will declare bankruptcy before they can retire.

Trump’s phony promise of putting money in the pocket of the average worker is exaggerated, but it is also a magic trick. It only works if you aren’t looking at what he is doing with his hands (and you should always keep an eye on what he is doing with his hands). Look, if you’re a middle class person and you have a one on one meeting with Rebekah Mercer, while you are in the room with her the two of you have an average net worth of billions of dollars. But when you leave the room, you go back to making $60,000 a year. Trump in his rhetoric is putting you in the same room with her and then dividing by 2. But you aren’t in the room with her (and wouldn’t want to be–she and her daddy fund Breitbart, the white supremacist tampon of a website). You are all on your own.

What the working class gets from Trump’s massive tax cut is a reduction in government services. Worse science, worse technology, worse roads, worse monitoring of pollution and hence worth health, worse schools for kids, worse universities. The Trump tax cut is a massive bank robbery of the people’s money and a piece of reverse Robin Hood theft in which the money is given to the rich. When the rich say “tax cut” you should hear “fewer government services for you.” The rich won’t mostly invest the $1.5 trillion that Trump gave them in productive enterprises in the US. Despite Trump’s promise to punish companies that relocate abroad, he hasn’t done anything practical about that.

So some of Trump’s rhetoric was just dressing up plutocracy as workers’ benefit, and some of it was love-bombing the egos of the white workers by putting down the black and brown workers.

Although the corporate media will at least to some extent call out Trump’s racism, the strongly Fascist overtones of his speech will largely be ignored, as will the punitive character of his policies for the average American worker.