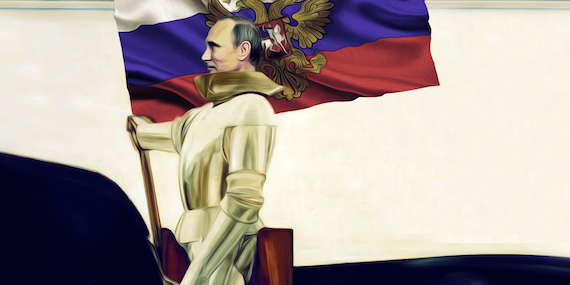 As much of the world makes amends for social and political injustices of the past, Russia is lionizing its despots, raising statues to the worst of them. Behind this phenomenon is an ultra-nationalist brand of conservatism that seeks to take Russian politics back to the Middle Ages.

As much of the world makes amends for social and political injustices of the past, Russia is lionizing its despots, raising statues to the worst of them. Behind this phenomenon is an ultra-nationalist brand of conservatism that seeks to take Russian politics back to the Middle Ages.

ATLANTA – While much of the world is busy dismantling monuments to oppressors, Russians are moving in the opposite direction, erecting statues to medieval warlords who were famous for their despotism. Understanding this revival can shed light on the direction of Russia’s politics.

In October 2016, with the endorsement of Russia’s culture minister, Vladimir Medinsky, the country’s first-ever monument to Ivan the Terrible was unveiled in the city of Orel. A month later, Vladimir Zhirinovsky, the leader of the ultra-nationalist Liberal Democratic Party of Russia, called for Lenin Avenue in Moscow to be renamed Ivan the Terrible Highway. And in July of this year, President Vladimir Putin christened Moscow’s own tribute to the tyrant, declaring, erroneously, that “most likely, Ivan the Terrible never killed anyone, not even his son.”

Most historians agree that Ivan lived up to his name; not only did he kill his son and other relatives, he also ordered the oprichnina, the state-led purges that terrorized Russia from 1565 to 1572. He also presided over Russia’s defeat in the Livonian War, and his misrule contributed to the Time of Troubles and the state’s devastating depopulation.

Joseph Stalin initiated the modern cult of Ivan the Terrible. But, since the mid-2000s, Russia’s Eurasia Party – a political movement led by the pro-fascist mystic Alexander Dugin – has moved to position Ivan as the best incarnation of an “authentic” Russian tradition: authoritarian monarchy.

Dugin’s brand of “Eurasianism” advocates the embrace of a “new Middle Ages,” where what little remains of Russian democracy is replaced by an absolute autocrat. In Dugin’s ideal future, a medieval social order would return, the empire would be restored, and the Orthodox church would assume control over culture and education.

Eurasianism, which was marginal in the 1990s, has gained considerable popularity in recent years by contributing to the formation of the so-called Izborsky Club, which unites the Russian far right. On several occasions, Putin has referred to Eurasianism as an important part of Russian ideology; he has even invoked it as a founding principle of the “Eurasian Economic Union,” a burgeoning trade area of former Soviet states.

Dina Khapaeva is Professor of Russian at the Georgia Institute of Technology’s School of Modern Languages. Her most recent book is The Celebration of Death in Contemporary Culture.