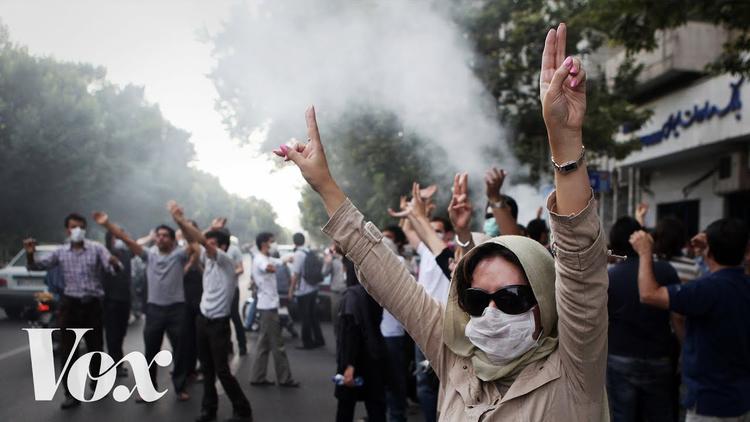 Hiroshima—Throughout the massive public demonstrations in 2009, Iranians protesting against the notorious government of Mahmoud Ahmadinejad were often airing their anger and frustration at the abuses of the regime in rhyme. During this past week, people’s seething discontent has again spilled onto the streets, starting in the holy city of Mashhad and spreading across the country to more than 80 cities. And once again it comes in rhyme.

Of the regime’s uncalled for meddling in too many conflicts abroad, while Iranians themselves suffer economic deprivation and hardship, the protestors were chanting:

think about our own predicament!

Of the unbridled corruption at the heart of the system:

Yet our government denies!

And, astonishingly, of the revulsion at the misdeeds of the ruling clergy, all in the name of Islam:

Did we revive Islam?

Nay—just misery for the people!

This tradition of verse is not surprising. It has deep roots in a country where great poets have been legion. Five stand out—I call them the Five Pillars of Iran—poets who over a span of 450 years, saved and graced not just the language, but the country’s cultural heritage, and maybe its soul.

The first pillar, literally and figuratively the savior of the Persian language, was the epic poet Ferdowsi, author of the monumental Shāh-nāmeh, the Book of Kings. Born around 940 in Northeastern Iran, at the time a center of learning and culture, Ferdowsi was a providential figure. In an Iran invaded and humiliated by the Arab armies in the 7th century, whose vast empire had disintegrated, ruling classes and Zoroastrian traditions dispersed or destroyed, and where Arabic was a daily fact of life, the defiant Ferdowsi’s Shāh-nāmeh—over 50’000 couplets in pure New Persian—revived not just the language of the Iranians but also their civilization’s history, ancient mythologies, and indeed pride. A popular story claims that Muhammad H. Haykal, the legendary Egyptian journalist and editor-in-chief of Al-Ahram, responding to the question as to why Egypt, despite its illustrious history, had become so thoroughly Arabized, quipped that it was because Egypt had not had its Ferdowsi. In the larger Persian-speaking world, from India to Turkey and Egypt, especially among the educated elite who used Persian as the lingua franca until the 19th century, Ferdowsi was revered. Even today, whether in Iran, Afghanistan or Tajikistan, the influence of his masterpiece remains unparalleled and, more to the point, accessible: any ordinary Persian-speaker can still understand the language used. The great poet was cognizant of the importance of his legacy, and of the debt owed him by posterity, when he wrote:

For 30 years I labored in pain,

But Lo, how I have revived the Persian language!

The second great poetic pillar of the Persian-speaking world was the genius Omar Khayyam. Born in Nishapur, also in the Northeast, in 1048, Khayyam was a true polymath. It was maybe his misfortune that, ’discovered’ by the Briton Edward FitzGerald in the 19th century, he was introduced to the English-speaking world tight-jacketed as the author of love sonnets, the Robaiyat (quatrains). Khayyam was so much more—a mathematician, jurist and philosopher, an accomplished astronomer who built an observatory, a professor of algebra and geometry who worked on the classification of cubic equations, and wrote a treatise on Euclid’s theory of parallels. He was my late father’s favorite poet, not just for the solace his verse brought in our family’s exile, but for his scientific achievements—my father used to say that the Middle-East’s embrace of obscurantist rulers in the 20th century stemmed in part from having turned away from the kind of open-minded learning and quest for science that Khayyam embodied. Khayyam’s disdain for any small-minded religion never diminished. His poetry distills a grand, free-spirited love-affair with Creation, vast in scale, timeless. Herewith a glimpse:

How speedily this caravan of life passes

Seize this moment of music, now!

The third pillar of the Persian language is the poet, mystic and Sufi teacher, Rumi. Born in 1207 in Balkh, he was son and grandson of prominent scholars of Islam. Rumi lived in dark times though, when the specter of the Mongol invasions loomed large across most of Asia. His family moved to Syria, then a great center of culture, to finally settle in Konya, in eastern Anatolia. It was there, in his late 30s, that Rumi met his spiritual master, Shams of Tabriz. The electrifying encounter changed him from a learned albeit relatively conservative clergy into a poet of universal reach. Astonishingly, even though he had not written much poetry before meeting Shams, Rumi was to give life thereafter to thousands of reams—dancing, whirling (he established the whirling Dervish tradition), chanting, praying. So profound are his two masterpieces, the Divãn e Shams and the Matnavi, that each time I find a different meaning in the same verse—in turn mystical, philosophical, pious, sensual, or suddenly civic and political. In recent years Rumi has become, in the West in particular, the ultimate Seer and Knower, the poet of all things New Age. Deepak Chopra quotes him. Madonna sings him. But for most Iranians he remains the one who transformed and transcended, the one who had the inner insight to expose the real, sometimes dark face of established religion, and the light and truth of God. One of my favorites is a verse, that tells of Moses overhearing a shepherd flirting with his creator as he walks his goats. Moses is outraged, that a mere shepherd would take the liberty of thus addressing the Almighty. A roaring edict comes to admonish him:

You have come to connect,

And not to separate!

We look only within,

Sa’adi, the fourth pillar of Iran, whose humanity and vision have earned him a place at the headquarters of the United Nations in New York, was born in Shiraz in 1292. He, too, was astonishingly learned, studying law, history, literature and theology in Shiraz and Baghdad, then traveling extensively across Central Asia and the Greater Middle East—Anatolia, Egypt, Palestine, Syria, Jerusalem, Mecca and Medina. Asia and the Silk Road had been upended with the Mongol attacks, and I often imagine the hardships of this curious, globe-trotting poet, as he criss-crossed lands in turmoil, even surviving seven years as the prisoner of Christian Crusaders. Yet the poetry of the humanist Sa’adi—he was the poet President Obama quoted in his 2009 Nowruz new year address to the Iranian people—remains full of gentleness and humor, his wisdom and longing for a society freed of the double-talk of religious hypocrisy and of political strife echoed by young Iranians who demonstrate on the streets today:

Humans are members of the same body

Born of the same treasure

If one member is in pain

So, too, are all other members

If you cannot feel the sorrow of others

How, pray, can you be called human?

And finally the fifth pillar—Shams-ud-Din Muḥammad Ḥafez-e Shirazi, known to the world by his pen-name Hafez.

I maybe biased but I would like to say that Hafez is unique, in the affection he bestows on his readers, one which they return manifold. Iranians simply love Hafez. His poetry, despite infinite layers of meaning and insinuation, remains light, almost danceable. His book of Divân, alongside the Holy Quran, is often placed as the king of ornaments on the Nowruz table. Persian-speakers ‘open’ Hafez whenever they have questions about life, when they are happy or downtrodden, hopeful or in despair. If a skilled interpreter of the poetry happens to also be an insightful observer of the human condition, and finds the right words to convey the poet’s intentions, then he or she will be in deep demand in any gathering.

Hafez was born in 1315 in Shiraz and grew up poor, working odd jobs, including as a baker. But his genius was apparent young, he learned the Quran by heart (hence his title, the one who ‘memorizes’). He hardly left his beloved Shiraz, but his poetry is filled with so many intricate inner journeys and grand vistas. His provocative odes to wine and to love, his melodious rhymes, his implicit and explicit reprimands of the religious and political classes, for hypocrisy and ignorance, resonate still with Iranians, who flock to his mausoleum on the northern edge of Shiraz as they would to a sacred shrine. How not to be moved, reading the last line of his song of friendship?

Cherish this encounter! Once we pass this fork in the road

We shall not meet again.

Why, one may well ask, do we still read all this ancient poetry, even in the 21st century?

The first answer is, simply, because we can. Even a modestly educated Persian-speaker today will be able to read, or at least to comprehend and quote, most of these poets. Thanks in part to Ferdowsi and his legacy, the Persian language has remained relatively unchanged for at least a millennium.

We also read ancient poetry because at times it is the only heritage we have left. When my parents left the Iran of the Ayatollahs they had to abandon home, hearth and most of their belongings, but our family’s books of poetry made the great passage to America, and I can still find my father’s notes, scribbled on the margins of the pages of his favorite pieces. There were times during exile when all he had of his country of birth was poetry.

Most importantly, we read and recite ancient poetry because to us it does not feel ancient at all. Poetry is in our DNA, it brings us solace, and courage. Our Five Pillars, and other exceptional bards, help us articulate, in rhyme if need be, our opposition to chaos and abuse. Over the centuries Iran has survived attacks by foreign invading armies, endured the manipulations of imperialistic powers and suffered far too many home-made, inept, tyrants. Yet, and in spite of all this, thanks to these ancient poets we remain connected, rooted—no mere floating reeds but part and parcel of an ancient, living civilization, with a unique, undying tradition of poetry.

In these times of trial, more than ever their voices are needed.

This essay is written in my personal capacity and does not represent the views of either Hiroshima Shudo University or UNITAR.