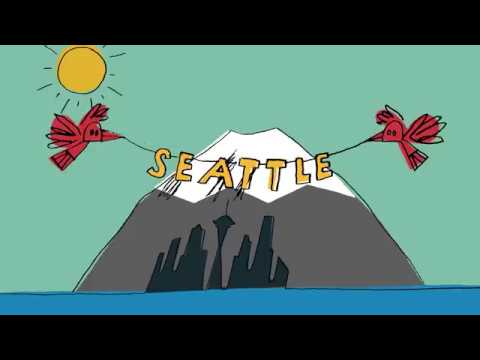 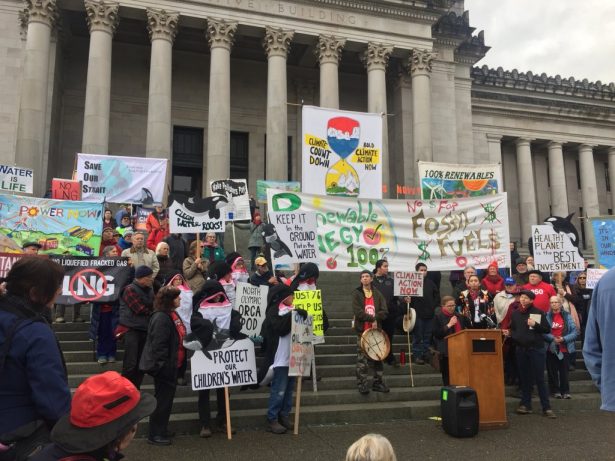 As Washington state senators prepared for the first legislative session of 2018 at the capitol building in Olympia yesterday, their traditional welcome ceremony was disrupted by at least a hundred activists from across the state, who had made their way into the balconies. From there, to the dismay of their elected officials, they delivered a loud message for all in attendance: “We have a climate crisis. You need to act now!”

The demonstration was part of an effort organizers are calling Climate Countdown, a campaign pressuring Democrats to pass and implement legislation that reduces carbon emissions. With a Democratic majority in both legislative chambers, organizers from a handful of organizations, from local 350.org chapters to indigenous groups, believe this is the perfect — and perhaps the only — opportunity to act.

Since 2013, passing any form of climate-related legislation in Washington was difficult at best. Republicans held a majority in the state Senate and used this advantage to block proposals, such as a cap-and-trade system, from Democrats. Gov. Jay Inslee, considered the “greenest governor in America” by the League of Conservation Voters, often felt frustrated by Republican opposition to his climate plans.

Yet, on Nov. 8, Democrats succeeded in regaining control of the state Senate with a slim 49-48 majority. Alec Connon, an activist with 350 Seattle, said this victory led to activists discussing a potential plan to ensure lawmakers took responsibility without using Republicans as an excuse.

As part of the campaign, residents are putting forward two demands to lawmakers. First, they want officials to follow a climate test, which are guidelines that determine a project’s approval if it harms the climate. This would reject all fossil fuel proposals.

Second, activists want lawmakers to pass a bill that ensures the state switches to 100 percent renewable energy by 2028. All sectors under the government’s jurisdiction would move toward using alternative fuels.

The window to do this is short, as Washington lawmakers will only meet for 60 days this session. As 350 Seattle communications coordinator Emily Johnston explained, every minute is precious. She referred to scientists who warned world leaders last June that we have only three years to reduce greenhouse gases to a point where the Paris climate agreement target of 1.5 degrees Celsius is still attainable.

“We know what happens beyond that,” she said. “[Climate] acceleration and the disasters we are starting to see become unstoppable.”

Johnston referred the federal government’s refusal to deal with climate change as a major reason for not only Washington, but also other states to focus on the environment.

“If the entire West Coast were to develop laws that were very aggressive on climate then that would have a [massive] impact because the economies of Washington and California are huge,” she said.

Connon used Montgomery County, the largest county in Maryland, as an example of what Washington state could do. Last month, officials there passed a resolution declaring a “climate emergency” and aimed to reduce the county’s greenhouse gas emissions by 80 percent by 2027, and ultimately 100 percent eight years after that.

“The example set by Montgomery County is a commendable example and one we hope Washington state will follow,” Connon said.

Washington does have commitments by law to reduce its greenhouse gases to 1990 levels by 2020. But Olympic Climate Action member Melanie Greer said Washington will fail to meet that deadline barring a significant policy change.

“I want to see real legislation that matches what scientists say has to be done, as well as demonstrable action — so that the state moves in the right direction,” Greer said.

After the activists in the balconies finished their chant, they were ordered to leave by security guards. Having made their voices heard, they are now planning the next steps of the campaign to ensure officials make climate action a top priority this legislative session.

“The clock is ticking,” Connon said. “We, as a society and as a whole, have to respond to the climate crisis.”

KUOW Public Radio: “What would a climate-friendly Seattle actually look like?”