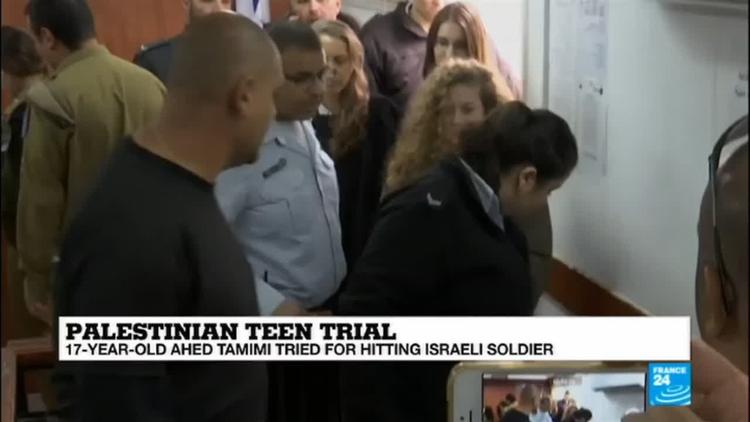 Celebrities and civil rights figures declared their support for imprisoned Palestinian teenager Ahed Tamimi, 17, who was detained by Israeli forces on December 15, after a video of her slapping an Israeli soldier who broke into her house in Nabi Saleh village, near Ramallah, went viral.

A number of high-profile entertainers, scholars, and civil rights icons signed on Monday a letter in support of Ahed Tamimi and other Palestinian children imprisoned by Israel.

American political activist and author Angela Davis said she doesn’t only stand with Tamimi, but with the rest of the Palestinian children held in Israeli prisons.

“I stand in loving solidarity with Ahed Tamimi and the 300 Palestinian children languishing in Israeli prisons. Over 70 years of state violence and land theft has aimed to break the Palestinian people, but, it has not worked and will not,” said Davis. “They remain steadfast in their pursuit of freedom and equality in their homeland and we must stand with them until justice is delivered. Only in the presence of justice can Palestinian and Israeli children flourish together in peace.”

“I indeed sign on, and say we must defend our Palestinian brothers and sisters,” said West, “especially the children, living under vicious Israeli occupation.”

“The tragic case of Ahed Tamimi reflects a broader and deeper crisis within the Israeli legal system, which consistently criminalizes Palestinian children. Israel’s treatment of Palestinian children – through arbitrary arrests, unlawful detention, and inhumane physical and mental abuses – reflects a complete indifference to the lives and well being of the vulnerable,” said Hill. “These actions not only contradict the most basic standards of human dignity and respect, but also violate the letter and spirit of international law. As Israel’s largest source of financial support, the United States government has a moral responsibility to immediately reject, denounce, and prevent the military detention of Palestinian children.”

Phillip Agnew, director of Dream Defenders Mission, a member group of the Movement for Black Lives that recently initiated a letter in support of Tamimi signed by a number of high-profile entertainers and activities, said the only way to protect the community is to build a loving world for everyone.

“Committing to building a more just and loving world for us all,” said Agnew. “And embracing our shared struggle for liberation is the only way we can protect our communities.”

Tamimi and her mother, Nariman, also detained on the same day as her daughter, appeared in an Israeli military court near Ramallah on Tuesday, but the hearing for Ahed was postponed until March 11 and Nariman until March 6.

“This [Israeli Military] court of Occupation fears the light shined on it by this case,” said Lasky. “After it placed Ahed under open-ended detention in violation of her rights as a minor, the court now uses the false pretext of protecting these very rights as cover to shield itself from criticism this case raises.”