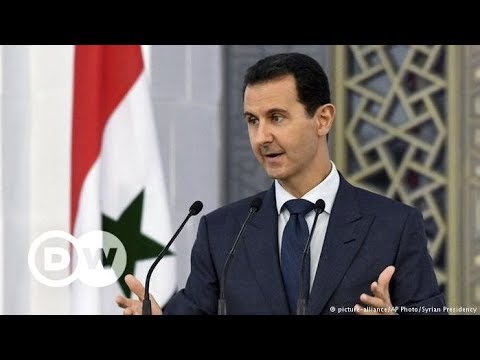 The end game is clear: Assad, Russia and Iran will emerge victorious.

Syrian President Bashar al-Assad (2nd L, Front) and his Russian counterpart Vladimir Putin (2nd R) view a military parade in the Russian-run Hmeimim Air Base in the coastal city of Latakia, Syria, on Dec. 11, 2017. Syrian Presidency/Xinhua News Agency/Press Association Images. All rights reserved.The conflict in Syria has been the most vicious in contemporary history, creating a geo-political hall of mirrors pitting Syrian against Syrian, Saudi Arabia against Iran and Russia against the United States.

To say that it is the most complicated proxy war of our times is an understatement. The war has had international and regional dimensions which have served to prolong, fuel and perpetuate the crisis.

The latest of which, a dramatic clash between Syria and Israel leading to the unprecedented downing of an Israeli F-16 after the latter targeted a group of Iranian installations in Syria, has threatened to further escalate to conflict. But in stepped Russia, and after promises made to either side, the situation calmed down, for now.

This only highlighted the growing importance of Moscow in Syria and the increasingly brave power plays Putin is making in the region.

In Syria, Russia strode in where the west was hesitant, and just over two years on from the riskiest move in post-Soviet Russian foreign policy, the end game is clear. Assad, Russia and Iran will emerge victorious, and that is a direct result of Moscow’s decision to intervene in 2015 when its long-term ally, Assad, was on the ropes and struggling to survive.

Any hopes the US had of being a powerbroker in Syria ended in September 2015. The presence of Russia immediately limited almost all western policy options that sought to oust Assad.

Russia didn’t have to worry about the Turkish-Kurdish dimension, it was too busy steamrolling Syria’s disjointed opposition. ISIS to Russia was no different to other rebel groups; in the eyes of Moscow they were all a threat to Assad and warranted an iron fist.

As Russia began to crush the anti-Assad opposition, the west could only watch from afar as the balance of power tilted in favour of the Syrian government.

The lack of western policy decisiveness is due to many factors; the emergence of a US backed Kurdish powerhouse in the north of Syria and Turkish efforts to quell that rise. The sharp rise of ISIS and other Jihadist groups further muddied the waters, creating an extra element of risk for a possible US intervention. This all played into Putin’s hands.

Over two years on from Moscow’s much maligned decision to intervene and prop up its long term Syrian ally, the Russians have been vindicated, insofar as the so-called Islamic State has been defeated and expelled from all Syrian cities, the last of which in Deir-Ezzor broke the back of the terror group.

The Syrian army, with assistance from Iranian backed militias, Hezbollah and Russian firepower is now on the victory march towards the remaining opposition strongholds in Idleb, Eastern Ghouta, Daraa and Qunaitra, possibly finishing the military side of the conflict by the end of 2018.

In December 2017 President Putin victoriously declared a withdrawal of a “significant part” of Russia’s military forces in Syria, and heralded a successful end to the military operation.

The echoes of negativity and criticism of Russia by the US seem but a distant memory, and President Obama’s claim that Russia would be caught in a “quagmire” never truly transpired.

Putin’s bold remarks came during a visit to Hmeymim air base in Latakia where he told his forces that they had “fought brilliantly” and that the operation to destroy terrorism in Syria had neared a successful completion.

Russia has a new found appetite for power politics in the Middle East.

The Russians had an official casualty list of 41 soliders, though the real number may be higher, it is far removed from the thousands killed in the Soviet Union’s long and brutal insurgency war in Afghanistan.

Most important of all, Russia saved its only genuine ally in the Middle East, maintaining and expanding its power and military bases whilst sending out a strong message to the world: Russia has a new found appetite for power politics in the Middle East.

Russia’s decision to intervene in Syria marked a culmination of sorts, this was the first real ‘great power’ involvement in the conflict on a large scale. Moscow had seen the anti-Assad opposition grow and weaponise, and it didn’t act for some time, save for some strong language and the use of Veto’s at the UNSC.

September 2015, however, marked a new stage of the Syrian war, one where Moscow would emerge as victor and powerbroker.

As the US failed in creating a consistent and well defined policy towards the crisis, the Russians saw an opportunity and were prepared to step in.

Moscow’s intervention in Syria was timely, it checked a large-scale rebel advance on Assad’s coastal heartland and utilised the international mood towards groups such as ISIS and Al-Nusra, at a time after atrocities in Paris, San Bernardino and Ankara were committed. Moscow played on the west’s fear of the influx of refugees and terrorism.

The legitimate fear the coastal areas in Syria may be overrun, thus placing the Russian Naval base in Tartus under direct attack spurred Moscow on to take matters into their own hands. The naval base is not large or incredibly sophisticated, it generally holds around ten Russian ships and other auxiliary vessels at any one time. Its significance is mainly due to the huge distance between Russian sea ports and the Mediterranean.

Russia also has one eye on the future. In December it confirmed it will maintain a permanent military presence at its air and naval bases in Syria. The agreement signed for 49 years with Damascus will allow Moscow to harbour eleven warships in Tartus including nuclear ships.

Russian intervention, in the words of foreign minister Sergei Lavrov, prevented the collapse of a “country whose capital was two to three weeks away from being seized by the terrorists.”

Although this admission may have been slightly exaggerated, it still cemented the fact that Russia felt the necessity to act and did so.

Had the US been brave and acted in either 2013 after the chemical weapons accusations or in 2015 when the Syrian government was flailing and desperate, it could have been in Russia’s position today.

Moscow didn’t act without reason, it waited for one year of western airstrikes against ISIS in Syria, and years of support for anti-Assad groups before acting. With a swift and brutal intervention, led by thousands of attacks and airstrikes against rebel groups, and at times unfortunate civilians, of which hundreds if not thousands have been killed, Russia turned the tide of the conflict towards Assad.

Moscow ensured a position of strength for itself in Syria’s geo-political war, in the greater scope of things, it emerged victorious from a risky and dangerous decision to enter a foreign conflict.

Russia has secured its long term interests in Syria

By decisively backing President Assad Russia has secured its long term interests in Syria, gained considerable more influence in the region and sent a powerful message to the world, that Russia is growing in strength and ambition.

Russia’s firepower was also aided by soft diplomacy; the Russians helped to broker a ceasefire in Al-Waer district in Homs, the last remaining anti-government stronghold in the city, which was the nucleus of the uprising.

The agreement on 2 December 2015 entailed 300 rebels leaving the district with aid going the other way. Since then Aleppo, Daraa and areas around Damascus have all seen Russian brokered ceasefires. Russia established a center for reconciliation at the Hemeimim air base in Lattakia in 2015 to negotiate rebel surrenders and defections.

Russia is also set for a long term economic investment in the country and has secured a long-term foothold in Syria’s energy sector potentially making Syria a future long term transit hub for oil and gas shipments to Europe. This allows Russia to expand and cement its control over a European gas supply.

Soyuzneftegaz, the Russian energy giant, obtained exclusive rights to explore offshore gas reserves off Syria’s coastline, while contracts, both current and pre-war, between the two countries are worth $1.6 billion alone.

It is no surprise that President Putin declared “mission accomplished” in a visit to Syria in early December. Russia has no doubt altered the trajectory of the Syrian conflict, ultimately dictating a winning outcome.

Danny Makki is a freelance journalist and commentator on the Syria conflict. He has an MA in Middle Eastern politics from SOAS University, specialising in Syria’s relations with Russia and Iran.