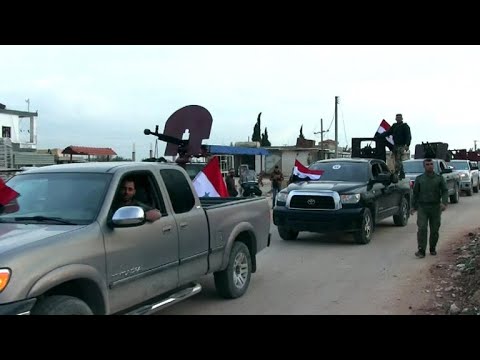 As Syrian government forces crush the country’s largest remaining rebel strongholds and with Bashar al-Assad apparently here to stay, Syria is turning into an arena for three new proxy conflicts. In the south, Israel is facing off against Iran; in the northern region of Afrin, Turkey is fighting the Kurds. Meanwhile, in the eastern provinces, Syrian Democratic Forces (SDF) are pitted against the Russian-backed Syrian armed forces.

If and when the Syrian conflict proper comes to a close, these three major fault lines are likely to become ever more pronounced. Together, they indicate that the future of Middle Eastern security is still bitterly contested by major players with potentially irreconcilable interests.

When the Israeli prime minister, Benjamin Netanyahu, held up what he said was a piece of a downed Iranian drone at the 2018 Munich Security Conference, he raised the stakes in an escalating proxy conflict with Iran. The drone was allegedly shot down by Israeli forces after having penetrated Israeli airspace from Syria.

Shortly before this, an Israeli fighter jet was shot down by Syrian anti-aircraft fire while the Israeli military engaged directly with Iranian forces in southern Syria. Netanyahu duly dialled up his rhetoric and made it clear that Israel would be prepared to go to war not only with Iranian proxies, but with Iran itself.

Israel sees Iran’s presence in Syria as part of a bigger jigsaw of Iranian Shia militias in Iraq, Yemen and Lebanon. Netanyahu knows that the Trump administration is fully in line with Israeli foreign policy here: both are intent on containing Iran, Syria’s most important backer besides Russia.

On the face of it, even Russia’s military role in Syria is diminishing as the Damascus government makes strategic gains. But while Vladimir Putin announced the withdrawal of Russian forces in December 2017, it has since been reported that Russian private contractors are recruiting mercenaries to fight in place of the regular Russian army.

These speculations have only intensified since US forces killed Russian irregular forces in clashes near the eastern city of Deir ez-Zor in mid-February. Eastern Syria in particular is likely to remain contested territory – not least because it’s host to the country’s major oil and gas fields.

Away from the battlefield, Russia has also sidelined the US and the UN in diplomatic initiatives. While Moscow brought Turkey and Iran on board for peace talks in Astana to discuss a post-conflict political settlement for Syria, the Russian-Iranian-Turkish “Astana format” has not proved as cordial as many hoped.

Turkey and the Kurdish factor

Whereas Moscow does not list the Kurdistan Workers Party, the Kurdish Democratic Union Party (PYD) and the People’s Protection Units (YPG) as terrorist organisations, Turkey considers any recognition of them a dangerous encouragement of Kurdish nationalism. Sure enough, when Russia invited the PYD to the Syrian National Dialogue Congress in Sochi, the invitation met with a diplomatic backlash from both Turkey and the Syrian opposition.

Ankara is determined not to allow the creation of an autonomous Kurdish territory in northern Syria. Hence its Operation Olive Branch against the PYD in the Afrin region, a highly assertive military initiative that Turkey says will continue in spite of a 30-day ceasefire greed upon by the UN Security Council on 24 February.

Turkey’s Afrin operation has not gone down well, even with Turkey’s erstwhile allies. Russian foreign minister, Sergei Lavrov, publicly announced that Moscow rejects “attempts by external forces to … promote a Syrian and regional agenda that has nothing in common with the legitimate interests of the Kurdish people”. Likewise, Iran condemned Turkey’s moves in Afrin.

Both Moscow and Tehran, however, have refrained from criticising Turkey’s incursion too loudly. Russia and Iran’s acquiescence worries Damascus greatly, as Assad fears the entrenchment of pro-Turkish Syrian rebels in the country’s north. With pro-Syrian government forces sent to Afrin to confront the pro-Turkish offensive, the risk of outright Syrian-Turkish clashes is increasing.

As for Moscow and Tehran, distrust still prevails – even though the two remain the Assad regime’s public backers, and have helped each other in that cause.

While Russian airstrikes have provided cover for regime forces and Hezbollah to retake previously held opposition areas, Russia could not have fired its cruise missiles from the Caspian Sea without Iranian consent. Equally, in August 2016, Russia was temporarily allowed to fly sorties from the Iranian Nojeh airbase near Hamedan in western Iran to hit targets in eastern Syria. Russia and Iran have also formed an informal “4+1” platform with Iraq, Syria and Hezbollah to exchange information.

Yet the two countries remain mutually suspicious of each other’s long-term motives. Russia might tolerate Hezbollah’s activities on the ground for tactical reasons, but Moscow does not want to be seen as a pro-Shia power and thus alienate the Middle East’s important Sunni actors, not least Saudi Arabia. That means Moscow is clearly apprehensive at the escalating rhetoric between Israel and Iran, and perturbed by the presence of Afghan Shia fighters on the Syrian-Iraqi border, where they operate under Iranian auspices.

What started as a civil war in 2011 has quickly morphed into a regional proxy war. But as Assad is regaining territorial and political control seven years later, new regional fronts have opened in Syria – none of which look likely to die down soon.

CBS This Morning: “On the front line of Turkey’s fight with Kurds in Syria”