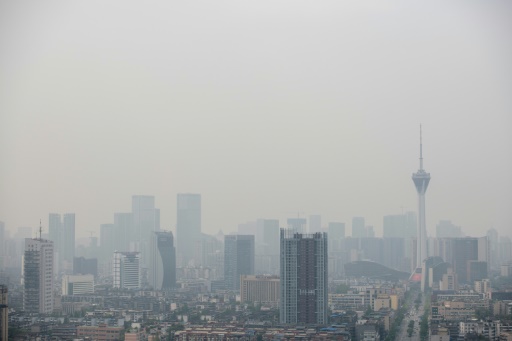 Beijing (AFP) – China could avoid nearly 94,000 premature deaths and save a whopping $339 billion in health costs over the next 12 years by honoring its carbon reduction commitments under the Paris climate accord, a study showed Monday.

The country has pledged to reach peak carbon dioxide emissions by 2030 at the latest and to cut carbon emissions per unit of economic output (GDP) by 60-65 percent compared to 2005 levels.

The study by the Massachusetts Institute of Technology published in the journal Nature Climate Change said China would have to slash CO2 emissions by about four percent each year to save nearly 94,000 lives through cleaner air in that timespan.

Researchers estimated that health-related savings could be about four times what it would cost Beijing to meet its climate goals.

AFP/File / FRED DUFOUR. China is the world’s biggest polluter and has faced an uphill battle transitioning from coal, which is used to generate roughly three-quarters of its power.

“The country could actually come out net positive, just based on the health co-benefits associated with air quality improvements, relative to the cost of a climate policy,” said co-author Noelle Eckley Selin, an associate professor at MIT.

China is the world’s biggest polluter and has faced an uphill battle transitioning from coal, which is used to generate roughly three-quarters of its power, according to the International Energy Agency.

The country’s coal consumption last year rose for the first time since 2013, according to the National Bureau of Statistics, despite a drive to promote less-polluting energy sources.

China announced plans in December for a national carbon market, which is likely to become the world’s largest exchange for emissions credits. The move is expected to slowly push utility companies and manufacturers to embrace clean fuel.

China is considered a potential leader in the fight against climate change after the US retreated from the Paris accord. This calls for capping a global temperature rise at well below two degrees Celsius (3.6 degrees Fahrenheit), and at 1.5 C (2.7 F) if possible, compared with pre-industrial levels.

The MIT team used a model to simulate how a climate policy changes a province’s economic activity, energy use and emissions of CO2 and other air pollutants. It calculated the amount of pollution which communities inhale, and consulted epidemiological literature to determine the number of deaths that would be avoided.

The researchers then calculated the economic value of the deaths and compared them with the total cost of implementing the policy.