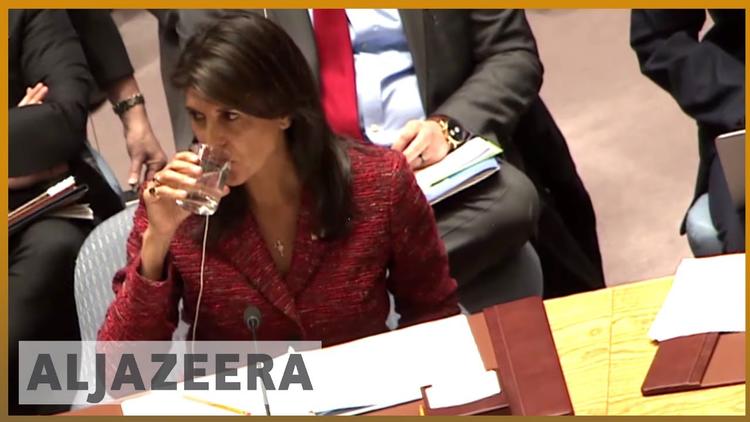 Just days after an alleged chemical attack killed and injured scores of civilians in Douma, Syria, the US, UK and France agreed in principle that international action is needed to hold the perpetrators to account. But they didn’t make clear what form their action would take – or how they would act while staying within the law.

All tactical considerations aside, legality is one of the biggest problems when it comes to military intervention. While the US in particular has a habit of using force overseas based on the legally dubious notion of anticipatory self-defence, a right or duty to attack another country on humanitarian grounds is even more controversial.

In the 1990s, under Tony Blair, the UK pushed the idea of “humanitarian intervention” as part of an “ethical foreign policy”. This was the principle invoked in 1999 to justify NATO’s actions protecting ethnic Albanians in what is now Kosovo. But that was a controversial move, and more recent efforts to reshape the idea into a legal “responsibility to protect” have done little to actually change the law on the use of force.

Clearly the Assad regime is ruthless, having killed tens of thousands of its own citizens using often indiscriminate methods. But unless and until the UN Security Council authorises the use of force (as it did against Libya in 2011), then the use of armed force on humanitarian grounds would be unlawful. And based on their Security Council votes on Syrian matters thus far, it is virtually certain that Russia and probably China would veto any such authorisation.

In any case, should outside powers go ahead and use force against the Assad government without permission, then Russia would seize upon their example to justify its own foreign interventions – not least its efforts to “protect” ethnic Russians in Ukraine.

The safest course of action – though still a risky one – would be to argue that when it comes to the use of chemical weapons, there is an emerging customary international legal norm (that is, one not dependent on a treaty) permitting the use of force to punish or prevent their use. That norm could perhaps be linked to the “super custom” (jus cogens) prohibition on torture, inhuman and degrading treatment or even genocide (depending on who has been targeted). And while this argument is somewhat tenuous, it would have the advantage of not providing a fig leaf for Russia’s actions in Ukraine.

Another critical question is how anyone at all can be held to account for atrocities committed by the Syrian regime.

There is ample evidence of human rights violations, but there is no world court of human rights to condemn them. Syria has signed the International Covenant on Civil and Political Rights, but it has not accepted the additional step needed for people to complain to the quasi-judicial UN Human Rights Committee.

This leaves international criminal law. Unless there is a change of regime, Syria itself is highly unlikely to attempt to prosecute Assad for war crimes or crimes against humanity. And if he travelled to another country that then sought to arrest him, he would have personal immunity as a sitting head of state.

That means the only place he could realistically face trial is at the International Criminal Court (ICC). But Syria is not party to the Rome Statute establishing the ICC, meaning the court’s chief prosecutor Fatou Bensouda is unable to initiate an investigation herself. The only way the ICC could become involved would be if the UN Security Council referred the situation to it (as it has with Libya and Sudan, which are not state parties to the Rome Statute). And as above, any such move would likely be vetoed by Syria’s Security Council allies.

So whatever Trump and his Western comrades decide to do, they will have trouble citing a concrete legal basis for any military action; even if they can, using the law to prosecute the conflict’s atrocities won’t be easy. But more worryingly still, these are just the legal stakes.

However awful the Assad regime is, and however lawful an attack on it would be, even the discussion about whether to use armed force is further poisioning the West’s relations with Russia. Meanwhile, the airspace over Syria is far more dangerous than that over the Former Yugoslavia in 1999 and even Libya in 2011. And as we all know from the lessons of Libya, Afghanistan and Iraq, toppling a brutal regime often raises just as many problems as it solves.