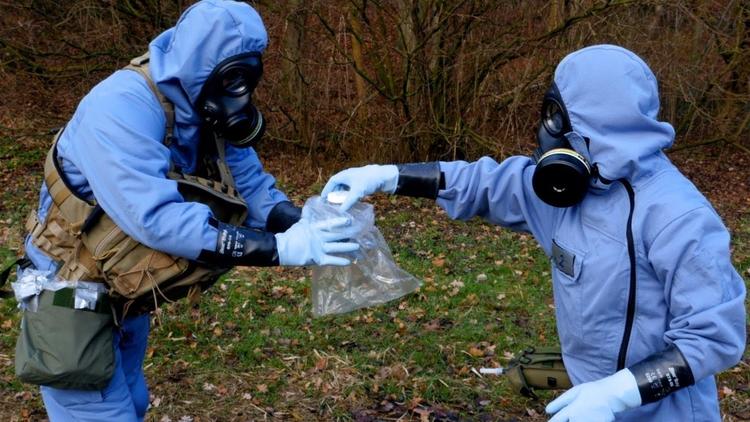 The sight of yet another chemical attack on civilians in Douma on Saturday 7 April caused the kind of international outrage that the world now expects and has come to know so well. Scenes of children frothing at the mouth and videos of people shaking uncontrollably were denounced by UN Secretary General Antonio Guterres as an “outrage” as the death toll climbed to over 78, at least 40 of whom died directly as a result of inhaling poisonous gas. The culprit was assumed to be the government of Syrian President Bashar Al-Assad, given its documented use of banned weapons in over 200 chemical attacks since the war began in 2011.

Two days later, the UN Security Council lived up to the predictions of paralysis, after the US and Russia used their veto power to prevent either of their respective resolutions on the issue from being passed. Undeterred, US President Donald Trump, who had tweeted that the “animal Assad” would have a “big price to pay”, moved to form a coalition along with Britain and France. By Friday evening, air strikes had hit several sites near Damascus. Even before the missiles reached their targets, though, what had previously been the claims of a small, if vociferous, section of Assad’s supporters had extended to commentators and analysts; questions started to be asked about whether or not the Douma attack was simply another example of “fake news”.

Such allegations are not new in the Syrian crisis. The regime has long accused opposition groups of faking incidents to support their cause, and Western media of inventing stories to tarnish Assad’s image. Russian websites have largely peddled a narrative sympathetic to their government’s foreign policy in the region, portraying the Syrian opposition as armed terrorist insurgents violating national sovereignty. Over time, regional commentators and analysts have been known to verify news from state news agencies, as well as Russian and Iranian outfits, due to the stories often being backed by unreliable and incomplete evidence.

Read: US: Chemical weapons experts have not entered Douma

Yet, in recent months, such conspiracy theories in relation to the civil war have gained strength, particularly due to the influence of social media, with many now deeming the portrayal of Assad as the primary aggressor to be “propaganda”. The call for Western retaliatory strikes last week has further galvanised “anti-imperialists” — who oppose further intervention — to adopt the regime’s narrative, positing it as the other side of the story.

The left and the far-right

The allegations of a Syrian conspiracy have, in a rare irony, united both ends of the political spectrum. The left has been keen to highlight the alleged lack of evidence implicating the Syrian government in the recent attacks, in an attempt to dissuade Western intervention. Journalist Max Blumenthal controversially summarised what he saw as “the pattern” of events in Syria, appearing to implicate the White Helmets civil defence group in faking the most recent attack, an oft repeated claim of the regime, despite the Nobel Peace Prize-nominated group being made up of non-partisan civilians.

In Britain, Labour Party leader Jeremy Corbyn has also called for a UN-led investigation into who was responsible for the Douma attack, while accusing the British government of going to war without sufficient evidence of who the guilty party is. He was joined in his call by the former leader of the fascist British National Party (BNP), who tweeted his support for Corbyn’s position.

IF he sticks to his guns then for 1st time in my life I will vote #Labour – right now NOTHING is more important than resisting the psychotic rush to #WW3 of Boris & the #neocons Corbyn refuses to blame Assad for chemical attack in #Syria https://t.co/ifxqeFlqvd via @MailOnline

Right wing media outlets such as Breitbart and InfoWars, formerly strong supporters of Donald Trump, have also featured multiple articles on the administration’s determination to invade Syria for its own interests, whilst maintaining that the evidence of Assad’s crimes is all but non-existent.

Between journalists and academics

The discussion has also extended to more mainstream journalists and academics. Earlier this week, acclaimed journalist and writer Robert Fisk wrote in the Independent of his trip to Douma alongside other reporters, all of whom were escorted by Syrian government officials. He tells of his encounters with several residents who claimed that they had no knowledge that a chemical attack had taken place; they said that most of these “fake stories” originated from armed Islamist groups. He also interviewed a Syrian doctor, who argued that whilst some people had suffocated on the night of the alleged attack, it was not as a result of toxic gas, but rather huge dust clouds in the area.

Fisk’s report seems to ignore the statements of the head of the largest medical relief agency in Syria, who told reporters this week that medics who responded to the suspected gas attack in Douma have been subjected to “extreme intimidation” by Syrian officials who seized biological samples, forced them to abandon patients and demanded their silence. It also excluded the fact that tens of thousands people are currently being tortured in jails of the Assad regime, many of whom have been arrested for speaking out against the government’s atrocities; that’s hardly an incentive for those who have survived a four year siege to do the same and give details of the use of chemical weapons.

Such realities also seem to have escaped a group of academics at some of Britain’s top universities who recently launched the Working Group on Syria, Propaganda and Media, a platform to examine the “role of both media and propaganda” and provide “reliable, informed and timely analysis for journalists, publics and policymakers.” Despite its very recent formation, the group has already attracted criticism for drawing upon Islamophobic tropes and ignoring the crimes of the Assad regime. Professors and lecturers from the universities of Edinburgh, Durham, Sheffield, Newcastle and SOAS feature among the group’s members and advisory board.

The claims of some of the academics have ranged from the insinuations that the White Helmets organisation is a front for Al-Qaeda, to denial of the most recent Douma chemical attack, all based on the underlying theory that the West is exaggerating the Syrian conflict in a bid to undermine Russia on the world stage.

The narrative surrounding the Syrian conflict has taken on a life of its own, demanding to be heard, and in the 21st century there is no better place to be heard than on the internet. In the wake of US air strikes in the past week, many have taken to social media highlighting that false allegations of weaponry have been used as a justification for war in the past, namely in the case of weapons of mass destruction in Iraq. Posts calling people to question the predominant narrative have been shared tens of thousands of times on Facebook and Twitter, asking why President Assad would gas his own people when he was allegedly on the brink of victory.

This questioning has been encouraged by several pro-Assad and pro-Russia activists, some of whom have garnered hundreds of thousands of followers, an equivalent following to that of mainstream journalists. Sarah Abdullah and Rania Khalek are two such commentators, both of whom boast of more than 120,000 followers on Twitter; they update their subscribers daily with the latest pro-Assad propaganda, popularising hashtags such as #SyriaHoax following atrocities committed by the regime.

Establishing nuance in the narrative

The international community is right to doubt the sincerity of further Western intervention in the Syrian conflict. Despite US Ambassador to the UN Nikki Haley vindicating the UN Security Council last week for failing to protect the people of Syria, the US has accepted only 44 refugees from the country in the past six months, a 99.3 per cent drop compared to a similar period under President Barack Obama. It is clear that the coalition’s action on “red lines” extends only to temporary strikes on the country, thereby giving the Assad government the level of impunity needed to commit such atrocities again, safe in the knowledge that there will be few permanent or long-term repercussions.

However, the portrayal of the conflict as solely a proxy, imperial war between Russia and the West is reductionist, and ignores the sacrifices of the hundreds of thousands of Syrians who protested against the Assad regime demanding freedom and dignity. Contrary to the now prevailing discourse, denouncing further Western intervention whilst also condemning the atrocities of Syria and its allies are not mutually exclusive.

The narrative of the Syrian regime and Russia has proven itself to be untrustworthy time and again. Its conspiracies are not limited to the veracity of certain incidents, but extend to the nature of the conflict altogether and ultimately seeks to prolong the reign of President Assad. The absence of nuance in the current conversation indicates the world’s immunity to the suffering of the Syrian people after seven years of war, and a desire to attribute the bloodshed to more than just one party in an effort to justify the international community’s ongoing inaction. The mainstreaming of pro-Assad arguments is yet another warning sign of the growing ability of political bias to obscure facts in the so-called information age.