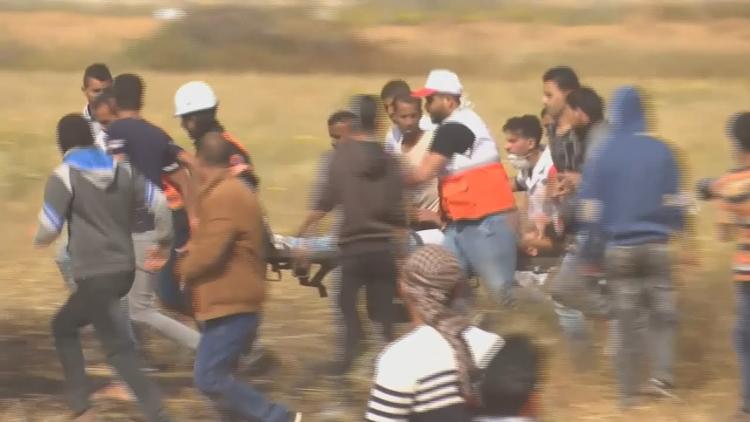 “I have no fear of dying because there is no life in Gaza,” one Palestinian told AFP.

Mohammed Hamada Hijila, 36, was killed in an airstrike in East of Shujaya, and Abdullah Al-Shehri, 28 years old, was killed by Israeli sniper fire at the eastern border. According to the Gaza Strip’s Health Ministry, 112 Palestinians have been wounded by Israeli army fire or treated for tear gas inhalation.

This is the third consecutive Friday in which Palestinians protest near the fence as part of the Great March of Return. Today’s march has been named “protest to burn the Israeli flag and hoist the Palestinian flag.”

During the two previous Friday demonstrations, Israeli snipers killed at least 30 unarmed Palestinians in Gaza, including journalist Yasser Murtaja who was wearing a vest identifying him as “PRESS.”

Despite international condemnation, including warnings by the United Nations Human Rights Council against the use of lethal force against civilians, who do not pose an immediate threat to life or severe injury, Israeli authorities and politicians have praised the army’s actions and vowed to continue repressing protesters to “protect” their border.

No Israeli soldiers or civilians have been wounded or killed during the protests in Gaza.

Criticism of Israeli use of live arms has come from within the country as well. On Thursday a group of former Israeli soldiers, members of the sniper teams, wrote in an open letter “we are filled with shame and sorrow… Instructing snipers to shoot to kill unarmed demonstrators who pose no danger to human life is another product of the occupation and military rule over millions of Palestinian people, as well as of our country’s callous leadership, and derailed moral path.”

The March of return has mobilized tens of thousands demanding their right to return to the towns and cities from which they were expelled following the creation of the state of Israel.

Refugees have a universally recognized right to return to their places of origin, but Israel has denied this right to the over five million Palestinians who are currently living as refugees in Gaza, the West Bank and countries around the world after fleeing from cities like Jaffa in the context of violence.

Israel has been open about their fear that letting refugees return to current-day Israel would mean the end of the Jewish character of the state because they would lose Jewish people’s demographic dominance.

Over half of the 2 million people who live in Gaza are refugees.

The AFP has reported one man, 36-year-old Sumaya Abu Awad, saying “I have no fear of dying because there is no life in Gaza.”

Gaza has often been called the largest open-air prison because of the decade-long blockade imposed by Israel and enforced both by Israel and Egypt. Report by the U.N. have revealed that Gaza will be uninhabitable by 2020 due to the destruction of infrastructure in Israel’s periodic bombings of the Strip and the blockade, which has severely limited Gazans ability to rebuild. Furthermore, the Gaza Strip has been progressively running out of fresh water and electricity.

Protests are set to continue every Friday until May 15, which marks the 70th year of the Palestinian Nakba, or catastrophe, when over 700,000 Palestinians were expelled or fled from their lands.

The United States has announced they will move their embassy from Tel Aviv to the occupied city of Jerusalem on May 14, in a move analysts believe will only heighten tensions.