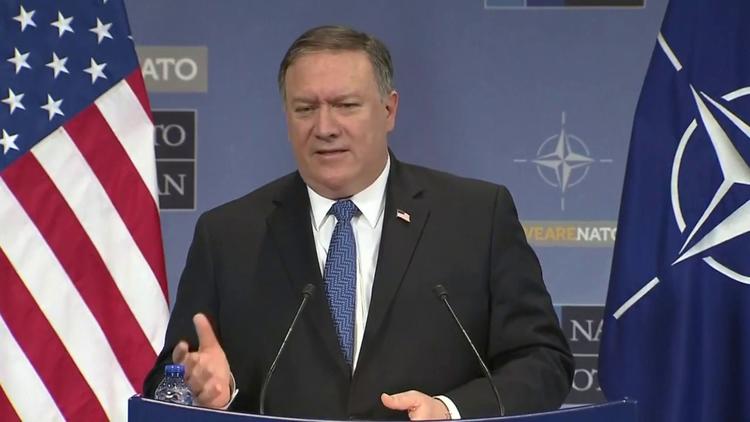 Immediately on being narrowly confirmed as Secretary of State by the Senate, former CIA director Mike Pompeo flew off to Brussels.

Pompeo appears to have had three main messages for NATO. The first is that Germany and other members have to pay a bigger share of its costs, a constant refrain of his boss, President Donald Trump.

The second, however, departed from Trump’s idiosyncratic presidential stance in reaffirming the importance of NATO, especially in the face of what Pompeo called Russian aggression (presumably in the Ukraine).

Trump in contrast has questioned the continued utility of NATO, and said at a press conference with German Chancellor Angela Merkel on Friday that NATO is wonderful but better for Europe than for the US.

Trump also distinctly does not see Russia as an aggressor or a threat, and is not interested in mobilizing other countries against Moscow. He says it would be wonderful if Russo-American relations improved, and he almost never has unkind words for Russian president Vladimir Putin.

The same disconnect over Russia had been visible between Trump and his former secretary of state Rex Tillerson, though Tillerson’s past oil deals with Russia made him less vociferous against Moscow than Pompeo is.

The third message of Pompeo to Brussels is that Trump will very likely pull out of the Iran deal of 2015 next month unless major changes are made to it. Since major changes are not going to be made to it, Pompeo is actually saying that the US withdrawal from the 7-nation accord is virtually a done deal.

When Trump fired Tillerson by Twitter, he gave a news conference in which he explained it was because Tillerson seemed to be “all right” with the Iran deal.

Trump brought Pompeo over to State as an organized crime boss brings a capo into a new neighborhood, as an enforcer and breaker of legs. Pompeo’s charge is to break the legs of the Joint Comprehensive Plan of Action (JCPOA), which vastly curtailed Iran’s nuclear enrichment program and capabilities. Iran’s program was civilian, for making fuel to run nuclear power plants to produce electricity. But uranium enrichment is inescapably potentially dual use, and the UN Security Council imposed crippling economic sanctions on Iran to gain the sort of inspection regime and control over allowable Iranian activities that would forestall any move by Iran to make a bomb. Iran’s clerical Leader, Ali Khamenei, has given formal religious ruling against nuclear weapons as a tool of the devil, but Europeans and Americans are skeptical of his sincerity.

As proof that the Iran deal is Pompeo’s primary target and first priority, his itinerary now takes him to Israel, Jordan and Saudi Arabia.

After the US far right, exemplified by Pompeo, manages to destroy the Iran deal, they likely will attempt unilaterally to use Treasury Department sanctions to prevent European trade with Iran, and then will attempt to maneuver Iran into a position where the US can find a way to destroy it militarily as their predecessors did with Iraq.