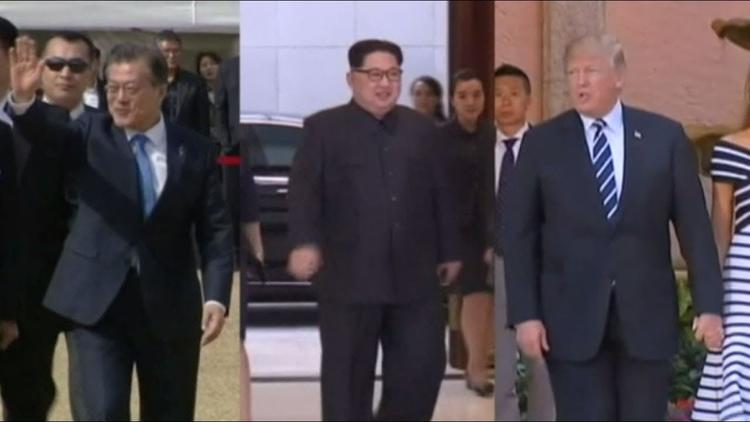 The fate of the 2015 Iran nuclear deal is sealed. It is set to expire by mid-May, as President Trump looks bent on ditching it. He won’t re-certify the deal unless some “terrible flaws” are fixed by Washington’s European allies – Britain, France and Germany. The “terrible flaws” are three additional elements Trump is seeking to latch onto the original deal – Iran’s ballistic missile program, curbs on regional influence, and further limitations on Tehran’s freedom to restart the nuclear program under the deal after 2025. The demand to incorporate the additional elements, which Iran interprets as an encroachment on its sovereignty, is simply a clear death blow to the deal. In a tit-for-tat move, Iran has threatened to withdraw from the deal if the US does so. Foreign Minister Mohammad Javad Zarif, in an interview with the Associated Press, has stated that “[T]here won’t be any deal for Iran to stay in”.

Though he loathes the Iran deal, Trump is creating a lot of surprises by his readiness to engage the North Korean leader Kim Jong-un, whom he once denounced as “the little rocket man”. In a dramatic shift from his past bellicose mood, he recently praised Kim Jong-un as a “very open” and “very honorable” leader. Not only that, he is looking forward to a historic summit with Kim in late May or early June to broker a deal on North Korea’s nuclear program and advances. So, why does Trump stand ready to tear up the Iran deal but seek to negotiate with North Korea?

Iran and North Korea are, of course, two different cases operating from two different geopolitical theatres in the world. They stand poles apart ideologically, politically, culturally and economically. What brings them together, like their allies China and Russia, is their common quest for independence in world politics, an urge to walk past the US shadow and their common opposition to US hegemonic dominance in their respective regions. Their resort to nuclear option has been solely guided by an overarching need to achieve security autonomy to discourage the US from aggressing them now and in the future. North Korea has succeeded in achieving the ultimate nuclear deterrent by defying all US-led regional and international odds, while Iran opted to accept curbs on its nuclear enrichment program in exchange for sanction reliefs.

President Trump sees North Korea as a more formidable foe, a foe equipped with more strategic tools than Iran. It shares common borders with one of the world’s two superpowers – Russia and another great power – China that has protected the North Koreans at least since the 1950–1953 Korean War. Clearly, Kim Jong-un is negotiating with the Trump regime from a position of strength. The successful launch of ICBM Hwasung–15 in November last year proved North Korea’s effective and credible deterrence capability against future US attacks. The Hwasung–15 missile launch has effectively ensured regime survival in Pyongyang; it also brandishes direct threats to US mainland. North Korean scientists and technicians are assumed to have succeeded in miniaturizing nuclear warheads to mount on ICBMs, a development the US has many reasons to worry about. That means the nuclear situation in the Korean Peninsula totally spiraled out of control rendering the US no option but to negotiate with Kim Jong-un. Additional pressures for negotiations came from other regional parties, particularly from China and South Korea who stand to immensely suffer in case open hostility breaks out between the US and North Korea.

A probable Trump – Kim summit in May or June hardly guarantees any success on the nuclear front, however. The contradictory objectives both leaders are hoping to realize from the summit may end up in a major failure. Trump is looking for total destruction of the North’s nuclear program, including its nuclear and missile testing sites, what is dubbed denuclearization; Kim prefers the preservation of the nuclear option for future peace and for future Korean generations to live without security fear. In his address to the Workers Party of Korea on April 20, Kim declared a moratorium on further nuclear and missile testing as his country had achieved a viable nuclear deterrent. He also signaled North Korea’s willingness, as a world power, to enter into talks on global nuclear disarmament.

The White House misinterpreted Kim’s speech as a major concession to accept denuclearization. President Trump prematurely tweeted: “Wow, we haven’t given up anything & they have agreed to denuclearization (so great for world), site closure, & no more testing!” He had the wrong impression that America’s strong-arm tactics produced the desired outcome. Other big hurdles in the way of a successful summit include the presence of American troops in South Korea, lifting of sanctions imposed on North Korea, the signing of a peace treaty between the two Koreas and the US etc.

There is no strong reasons for Kim to trust and conclude a deal with Trump’s America either. A noted American international affairs expert had this to say: “It’s hard to be powerful when nobody believes a word you say”. Indeed, the US has an infamous record of reneging on international promises and accords, creating widespread suspicions about its international behavior. Before the Berlin Wall fell in November 1989, the US promised to then Soviet leader Mikhail Gorbachev that if he would permit German unification NATO would not move eastward by one inch. Subsequently, NATO’s eastward expansion became such a critical threat that Russia had to fight the Georgia war in August 2008 to resist NATO’s eastward drive up to the Russian door.

Former President George W. Bush unilaterally withdrew from the Anti-Ballistic Missile Treaty in 2002 creating a confidence gap with Moscow. The Bush administration also convinced the slain Libyan leader Muammar Gaddafi to dismantle his nuclear program in exchange for guarantees for regime survival – the guarantee that what happened to Saddam Hussein would not happen to Gaddafi. Alas! In late 2011 the US and NATO not only toppled the Gaddafi government through direct intervention to support the anti-Gaddafi rebels but also captured and killed him. A similar fate was awaiting the Syrian President Bashar Al-Assad but he escaped because of strong Russian and Iranian military and diplomatic support. President Trump is on record for abandoning the Paris Climate Accord and the Trans-Pacific Partnership (TPP) multilateral trade agreement in the very first year of his government. Such developments are unlikely to escape the attention of the North Korean leader.

Why Trump reneges on the Iran deal

The Iran deal is the latest victim of America’s global non-committal postures. Possibly, Trump is finding it easy to tear up the deal as Iran is no North Korea. Unlike North Korea, Iran has no nuclear deterrent, no ICBM to threaten American territories far and wide, hardly has a committed great power ally standing firmly behind it and is surrounded by unfriendly or hostile neighbors in the region. Still, Tehran takes great pains to challenge America’s hegemonic role in its neighborhood and has successfully posited itself as a great stakeholder in Iraq, Syria and Lebanon. In contrast, the US enjoys the support of Iran’s two archrivals – Israel and Saudi Arabia, has military, air force and naval bases all around Iran and can even count on active military support by some big NATO allies, at least France and the UK, as demonstrated by the joint airstrikes on Syria on April 14.

Israel, in particular, is a much influential factor in Trump’s anti-deal position. Tel Aviv has been securitizing Iran’s nuclear program for quite a long time, often spreading lies and falsehoods that Iran was about to develop nuclear bombs. The 2015 Iran deal simply belied the Israeli claim and deprived the Israeli leader Benjamin Netanyahu of a deceitful propaganda tool against Iran. Thereafter, attention shifted to Iran’s regional role and ballistic missile program. On the whole, there is a clear political, military and diplomatic imbalance against Iran which Trump is exploiting to finally scrap the nuclear deal.

A great number of other reasons add up to the anti-Iran deal stance of a domestically beleaguered US president. The Iran deal, officially dubbed the Joint Comprehensive Plan of Action (JCPOA), brought a number of benefits for Iran, which the Iran hawks in Washington and in the Middle East region find completely unpalatable. By signing the deal, the Obama administration accorded a certain degree of legitimacy to Iran’s regional status and role. President Obama even advised the Gulf Arab leaders to share the neighborhood with Iran, much to the chagrin of Saudi Arabia. Politically, the US accepted the Islamic government in Tehran as a legitimate Iranian government, and economically, the deal paved the way for Iran to reintegrate itself into and reap benefits from the global economy. Just in the first year after the deal was signed, Iran recorded a double-digit economic growth rate of 12.5% in 2016 but GDP growth rate slid to 3.5% the next year largely due to a series of post-deal sanctions unilaterally imposed by the US. Iran’s regional rivals are scared that Tehran will soon vault them past in economic performance to claim the top economic power status in the region.

In short, the Trump regime’s anti-Iran deal posture reflects the US and its regional allies’ ambitious desire to undercut Iran’s regional power and influence. Trump engages North Korea because of its hard-won nuclear power status, ignores Iran precisely because it is not the Middle East’s North Korea.

Mohammed Nuruzzaman is Associate Professor of International Relations at the Gulf University for Science and Technology, Kuwait,