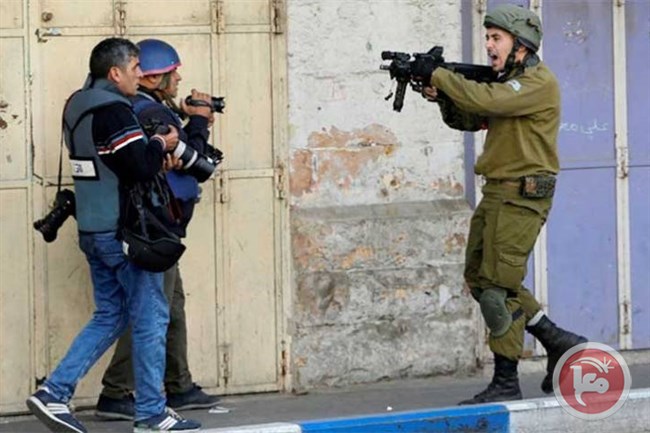 BETHLEHEM (Ma’an) — The Palestinian Journalist Syndicate (PCJ) released a statement on Saturday condemning the proposal of a new bill in the Israeli Knesset that would criminalize the photographing or recording of Israeli soldiers while on duty.

The bill was proposed on Thursday with the support of right-wing Israeli Defense Minister Avigdor Lieberman, and if passed, those found in violation of the law could face a prison sentence of up to five years.

The PCJ called the proposed bill “racist,” saying that it “severely attacks the profession of the press and legitimizes the criminal practices committed by the Israeli occupation army against the Palestinian people.”

The group said the law would “grant legitimacy to the Israeli occupation to commit more crimes,” and is an attempt by the Israeli government to “escape punishment and international justice.”

“The core of the law is to mislead justice and provide a formal cover for further crimes,” the group said.

In the statement, the group called on the United Nations (UN) and other international institutions “concerned with the freedom of press work to express their opinion and exert pressure on the occupying entity to comply with its laws in accordance with international laws and conventions, and to protect the freedom of press work and the role of fundamental journalists in uncovering and documenting the truth.”