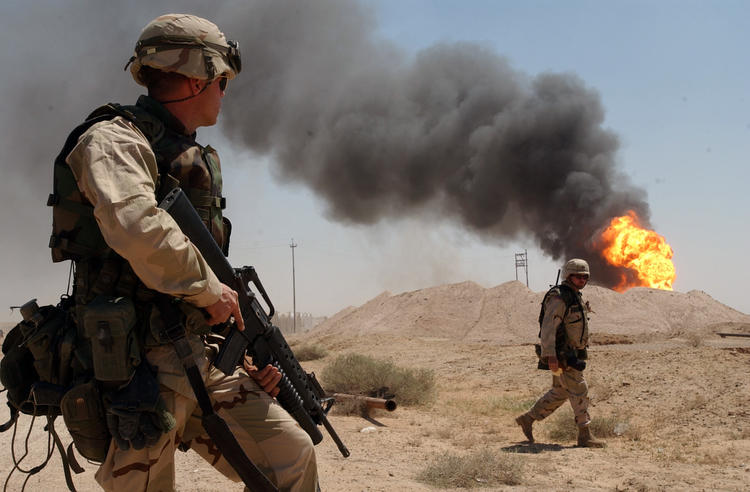 I teach a lot of 18 year olds, so I am keenly aware that a whole generation has come up who did not live through the Bush propaganda campaign against Iraq of 2002-2003. And, of course, a lot of people who did live through it have forgotten its details or how complicit corporate media were in amplifying the campaign. That is, the charge against social media today that it reinforces extremism by its algorithms could be equally well laid against elements of the US press throughout history. Joseph Pulitzer and William Randolph Hearst may have not said things like “you supply the photos, I’ll supply the war,” but they certainly behaved that way in propagandizing for the shameless Spanish-American War. Bill Keller at the New York Times was their 21st century successor.

Here is how the 2003 war was gotten up against Iraq.

1. Conspiratorial groups were formed, like the Project for a New American Century, which included then Halliburton CEO Dick Cheney and Israel Lobby uber-hawks like Bill Kristol, Bob Kagan, Paul Wolfowitz, Elliot Abrams and Frank Gaffney, who were known as Neoconservatives because they had been blue dog Democrats but switched to Reaganism when they assessed that there were no Democratic jobs in government to be had for a long time after 1981. The Project for a New American Century and other cells began trying to put pressure on the Clinton administration to take a belligerent stand against Iraq, in hopes of provoking an Iraqi counter-strike that could then escalate. They used their contacts among billionaires like Rupert Murdoch, to enlist his media, and worked their people in Congress against the president. Kristol is now trying out for Conscience of the Nation because he dislikes Trump.

2. Other governments were enlisted. A 1996 white paper,”A Clean Break,” was prepared by Neoconservatives for incoming Israeli prime minister Binyamin Netanyahu that urged getting up a war on Iraq, re-installing the Hashemite monarchy there, and then using the Hashemites to influence Lebanon’s Shiites toward a more pro-Israeli stance. Completely weird and unbalanced proposals are not the exclusive province of Trump.

3. Expatriate Iraqis were enlisted for dirty tricks and disinformation campaigns. Someone called “Curveball” was given to German intelligence, who appear to have fallen for him. Ahmad Chalabi, angling to come back to Iraq as its US-installed supreme leader, misled journalists, intelligence officials, State Department officials, Congress, and virtually anyone he could get hold of. Chalabi once made doggerel verse to insult me, which means I did my job in exposing him. Multiple disinformation nodes were established for various Western intel agencies, so that they all reported these sketchy allegations about an Iraqi nuclear and biological weapons program that did not exist.

4. Once Bush came to power, members of the cell like Douglas Feith (someone with ties to Israeli settlers and ideologically aligned with the Israeli Likud Party) were put in positions of power in the government and used their position to establish intra-governmental black ops units like the Office of Special Plans. Since the CIA and State Department often filtered out the wilder intel reports they were being fed by the expatriate operatives, Feith had his people go back through the raw intelligence and cherry-pick the planted reports, then illegally briefed them to the rest of the US government. I was widely attacked by the Neocons for saying that having a Likudnik as the third man at the Pentagon was a nightmare for US national security, and for pointing out that an acolyte of Slobodon Milosevic being given such a position would likewise be troubling. Not sure, in light of all we know, why that should have been a controversial statement.

5. PNAC and other hawks pressured Clinton to bomb Iraq in 1998. Clinton told UN weapons inspectors to withdraw before the strikes. They were never sent back in. The US press, whether from incompetence or malice or being secretly bribed, continually thereafter said that Saddam “kicked out” the inspectors, which was an unadorned falsehood. Having deprived Iraq of active inspectors who could serve as on the ground eyewitnesses that there were no weapons programs, the Iraq War Hawks were in a much better position to do propaganda.

6. The Iraq War clique glommed on to George W. Bush, especially once the latter unwisely made Cheney vice president, and inserted themselves into the 10 key political positions in his government, then gradually pushed him toward a war.

7. The Neoconservatives and others who wanted to break Iraq’s legs blamed the al-Qaeda attacks of September 11 on the secular socialist anti-fundamentalist government of the Iraqi Baath Party, and managed to convince most Americans of the completely ridiculous charge.

8. They made a case for regime change over Iraq’s human rights record or its regional role, though countries like Saudi Arabia or Israel with similar profiles were exempted from criticism.

9. Bush, Condi Rice, Cheney and Donald Rumsfeld tried to scare Americans that Saddam was 2 years or less from having an atomic bomb (he had no program). This campaign convinced Congress to vote for a war.

Why these networks were so invested in an attack on Iraq isn’t clear. The Neoconservatives were probably just acting as capos for the Likud Party, breaking the legs of a rival gang in the Middle East. Cheney and his oil circles likely wanted to lift Congressional sanctions on Iraqi petroleum and do bids on Iraqi fields (this was before fracking). Evangelicals wanted to open Iraq as a mission field, fondly imagining that the Shiites of Najaf had been yearning to return to the Christianity Iraqis largely abandoned during the first four centuries of Muslim rule, from the seventh through the eleventh centuries. The military-industrial complex wanted to make and sell large numbers of weapons and bombs. Various groups had their own motives and they all came together around Cheney.

I probably don’t need to say that people like Bolton who were part of the original plot have reemerged, or that the People’s Jihadi Organization (MEK) is an Iranian cell that is playing the role of Chalabi and has Bolton, Pompeo, Giuliani and others in its back pocket. It has strong connections to Israeli intelligence. I don’t need to point out that Iran is being maneuvered into expelling UN inspectors so that a propaganda campaign can be waged. The United Arab Emirates, part of the current plot, even had its house organ Alarabiya do a “documentary” monstrously alleging that Iran was behind 9/11.

The stage is set.