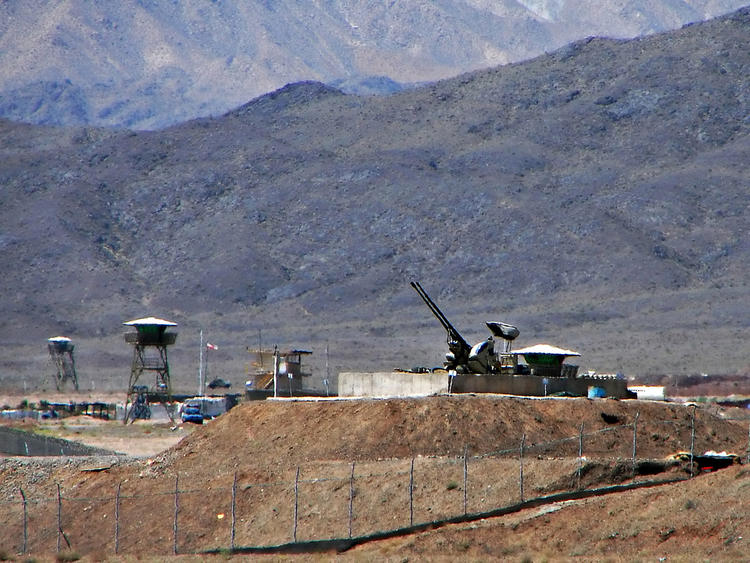 Washington (AFP) – The White House wants intrusive inspections of Iran’s nuclear sites to continue despite President Donald Trump’s withdrawal from a landmark accord on Tehran’s atomic program, US officials have told AFP.

Days after the US president walked away from a three-year-old deal that mandated rigorous scrutiny of Iranian facilities, senior administration officials said monitoring should continue regardless.

Known officially as the Joint Comprehensive Plan of Action (JCPOA), the deal between Tehran and major world powers forces Iran to open any site to inspectors within 24 days at most and introduced 24-hour remote surveillance at some sites.

Supporters of the Obama-era accord argue it provided “the world’s most robust” monitoring regime, allowing access to the Islamic republic’s most sensitive nuclear sites.

Speaking at a rally in Indiana on Thursday Trump said tough inspections were still needed.

“We must be able to go to a site and check that site. We have to be able to go into their military bases to see whether or not they’re cheating,” he said.

The White House is demanding the existing inspection regime, however imperfect, continue under the aegis of the International Atomic Energy Agency, the UN nuclear watchdog.

“We expect Iran will continue to implement the Additional Protocol and cooperate with the IAEA whether or not the JCPOA remains in place,” one senior administration official said.

A second official confirmed to AFP on Thursday that Washington still wanted the inspections.

Other signatories to the Iran deal — including Tehran, China and European powers — have vowed to press ahead with the agreement’s implementation.

But officials are privately skeptical about how long it can survive, particularly if the United States imposes sanctions on European companies doing business in Iran.

And non-proliferation experts have warned that a vital window into Iran’s nuclear activities could be lost.

“If the agreement collapses, Iran is under no obligation to implement any of these provisions, either the Additional Protocol or the deal-specific measures,” said Kelsey Davenport, director for nonproliferation policy at the Arms Control Association.

“The nuclear deal with Iran put the country’s program under a microscope,” she told AFP, saying the measures serve as “an early warning system that will set off alarm bells if Iran tries to cheat on its commitments or conduct illicit activities.”

Since the nuclear accord was reached in 2015, the IAEA has carried out hundreds of inspections inside Iran.

That includes monitoring at Fordo, an underground fuel enrichment plant inside a base used by Iran’s powerful Islamic Revolutionary Guard Corps.

The JCPOA adds an extra layer of scrutiny not found in existing accords, including monitoring of mines and restrictions on multi-point detonation systems and nuclear computer simulations.

The IAEA has so far confirmed that Iran is adhering to its “nuclear-related commitments,” although the US administration questions that conclusion.

“You cannot say that Iran is in compliance unless you are 100 percent certain that the IAEA and our intelligence are infallible,” said US national security advisor John Bolton.

That approach has left some questioning why the administration wants monitoring to continue at all.

“If they don’t trust the inspections, I don’t know why they would be strongly encouraging Iran to comply,” said Corey Hinderstein, a fuel cycle expert who previously worked on implementation of the deal at the Department of Energy.

“The fact is the inspections are and have been effective,” she said. 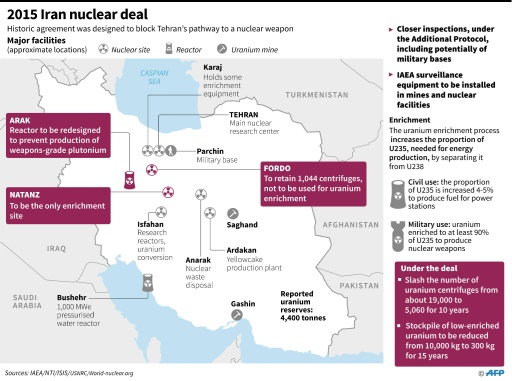 American citizens are working on the IAEA inspection team, but are based in Vienna, not on the ground in Iran.

Hinderstein said there is every indication that the US is preparing to pull out of other non-inspection mechanisms in the agreement, including converting the Arak heavy water reactor and the “procurement channel” that regulates the import of dual use materials to Iran.

Trump has described the agreement as “the worst deal in history” and vowed to renegotiate it.

He has also warned that Iran will be punished if it returns to military-scale uranium enrichment.

“If the regime continues its nuclear aspirations, it will have bigger problems than it has ever had before,” Trump said.

Andrew Beatty is White House correspondent for AFP. He is from Northern Ireland and has covered South Africa, Libya, Latin America and the European Union. Before becoming an editor and journalist he pursued academic studies in philosophy and anthropology. Follow him at @AndrewBeatty