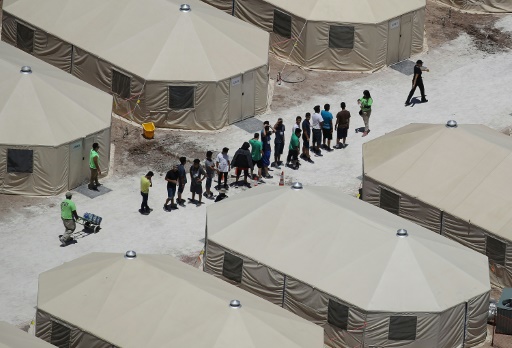 The executive order includes no provision to reunite the 2,300 separated families and illegally proposes to detain children indefinitely.

Caracas (TeleSur) – United States President Donald Trump signed an executive order Wednesday after an international outcry over his immigrant family separation policy at the southern border. The event was reported as Trump ending family separations, but that is far from true.

During his press statements, Trump confessed he “didn’t like the sight or the feeling of families being separated,” but insisted “we are keeping a very powerful border, and it continues to be zero tolerance… We have zero tolerance for people that enter our country illegally.”

Trump’s solution is to imprison parents and children together. However, there is a legal problem with this. The 1997 consent decree, known as the Flores settlement, prohibits immigration authorities from keeping children in detention for over 20 days.

Because of this settlement, former President Barack Obama had to order the release of children who had been detained for crossing the border illegally with their parents. To not separate the families, his administration released both children and parents trusting they would appear at the court hearing on their immigration cases.

Trump’s solution to the problem created by his “zero-tolerance policy,” which orders the detention of everyone crossing the border illegally is creating a confrontation between the executive and judicial branch by directing the Justice Department to seek court approval to keep children detained for more than 20 days.

Again, curtailing the consequences of a decision made by the executive falls on other branches of government. Now, federal Judge Dolly Gee, who oversees the Flores settlement has 20 days to reverse the ruling and allow immigration officers to detain children with their parents for as long as necessary.

But detaining children indefinitely doesn’t seem like a real solution.

Kevin Appleby, a senior director at the Center for Migration Studies, said “it is outrageous that the president is pushing for the criminal detention of innocent children as a solution to his own evil act… The best solution would be releasing families to sponsors or placing them in community-based alternatives to detention programs, which are less expensive and much more humane.”

The Trump administration has dismissed this possibility claiming 80 percent of the people crossing the border illegally would stop appearing at their court hearings and remain in the country.

Despite their claims, the Center for Immigration Studies has found that over the past 20 years 63 percent of immigrants did show up for their immigration hearings.

If the Flores ruling is not reversed, immigration officers will have to separate the children from their families again.

Furthermore, the president’s order does nothing to secure reunification of the 2,300 children who have already been separated from their families.

According to John Sandweg, former director of the Immigration and Customs Enforcement (commonly known as ICE) some parents have already been deported while their children continue under U.S. custody.

Featured Photo: GETTY/AFP / JOE RAEDLE. Children and workers are seen June 19, 2018 at a tent encampment recently built for migrant children near the border in Tornillo, Texas.