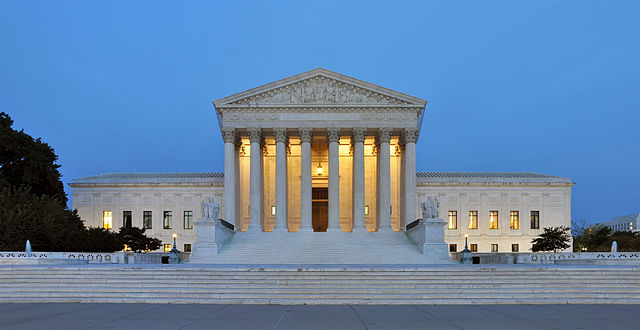 Washington, D.C. ( Otherwords.org) – The Supreme Court is a real piece of work. Over the last few days it’s been popping off far-right proclamations like a drunk uncle at Thanksgiving. Except this uncle gets to make the rules in your house, and he can stay there until he dies.

Over about 48 hours, the nation’s highest court gutted the ability of America’s public employee unions to fundraise. It ruled that a president can freely apply his well-documented anti-Muslim bigotry to U.S. immigration policy, as long as he says that’s not what he’s doing. And it upheld deeply gerrymandered congressional maps in North Carolina and Texas, which lower courts ruled were blatantly designed to make the votes of poor people and people of color count for less.

These decisions weren’t without their dissenters — Justice Sonia Sotomayor in particular delivered fiery rebukes to the Muslim ban and gerrymandering decisions. But each one was decided by a rigid 5-4 vote, with the court’s right-wing majority carrying the day.

Please recall how this majority came to be.

When the last court seat opened up in early 2016, President Obama appointed the boringly centrist judge Merrick Garland. But the GOP-controlled Senate refused to seat him, or even to hold a single hearing. This was an almost unprecedented obstruction.

Instead, they held the seat open till they had a Republican president, who appointed the hardline conservative Neil Gorsuch.

Senate Republicans then changed the chamber’s rules so Gorsuch could be seated without the votes needed to clear a filibuster. That gave them the fifth vote they needed to disenfranchise voters, gut unions, religiously discriminate, and god knows what else.

And it’s more maddening than even that.

According to Think Progress, the senators who opposed Gorsuch represented 53 percent of Americans, but our arcane constitution gives much greater weight to less populous (and more conservative) states. And, remember, Gorsuch was appointed by a president who got nearly 3 million fewer votes than his opponent, but won thanks to the same lopsided malapportionment that also gives us the Electoral College.

Gorsuch, appointed by a minority president and confirmed by representatives of a minority of Americans, now gets to slur offensive proclamations at our tables for life. A similar pattern seems likely to play out following the retirement of Justice Anthony Kennedy, for whom the president will no-doubt name a hard-right successor.

The malapportionment will only get worse as progressive voters — and an ever larger share of the U.S. population — cluster in the bigger states underrepresented by our system. Meanwhile, lawmakers will continue drawing maps amplifying their own advantage and passing laws suppressing the votes of everyone else, with the likely backing of a Supreme Court even more conservative than it is now.

Under these conditions, electoral politics can seem hopeless. But they don’t have to be.

For instance, organizers in Arkansas, Michigan, Missouri, Oklahoma, and Utah are pushing ballot initiatives to put map drawing in non-partisan hands. Similar measures have already succeeded in California and Arizona. Others are being considered by lawmakers in states like Ohio, where voters overwhelmingly backed a requirement to get bipartisan buy-in on any new maps.

Grassroots mobilizations like the Poor People’s Campaign, meanwhile, are looking into mass voter registration drives as one way to push back against voter suppression. And election results like socialist Alexandria Ocasio-Cortez’s stunning primary victory over veteran establishment Democrat Joe Crowley point to a vibrant battle of ideas that defies our sclerotic voting system.

Can movements like these swing more elections? Maybe — it’s a steep climb. But more importantly, they’re building a strong base of Americans who aren’t going to put up with a system that leaves their drunk uncle to hold court forever.