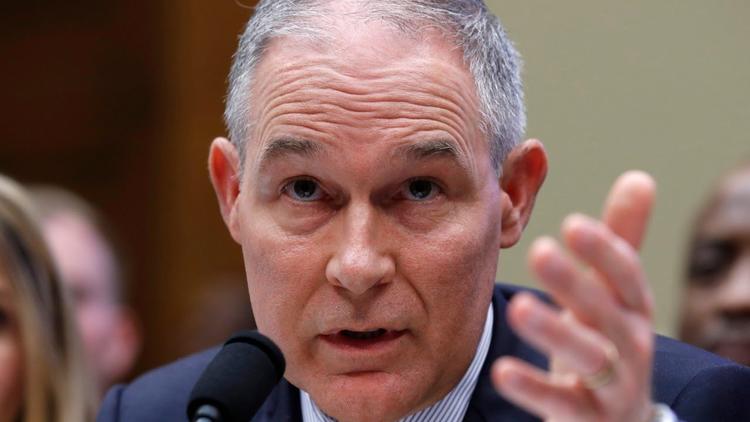 Scott Pruitt’s abuse of our environment is far more dangerous than his abuse of taxpayer money.

Madison, Wi. (Otherwords.org) – Did you hear that the head of the Environmental Protection Agency (EPA), Scott Pruitt, is so corrupt that he spent $1,560 on 12 customized fountain pens? Or that he spent another $43,000 on a soundproof phone booth in violation of government spending laws?

Pruitt’s big spending on the taxpayer dime has earned him well-deserved scrutiny and outrage. But what’s really outrageous is what he’s doing with the EPA.

While Pruitt was getting headlines for having taxpayer-funded aides do his private business, his EPA just gutted an Obama-era law to protect Americans from toxic chemicals.

For four decades, the Toxic Substances Control Act of 1976 did little to require that all new chemicals (or untested old ones) were properly vetted for safety before allowed onto the market. Even the chemical industry said it was flawed.

In 2016, the Republican-led Congress passed an update that would help keep Americans safer from toxic chemicals.

Under Pruitt, the new law won’t apply to any chemicals in the air, ground, or water. So what does it apply to? Only direct contact.

While spending over $1,500 on pens is a disgusting misuse of government resources, the ultimate harm it does to the American public pales in comparison to allowing toxic chemicals into consumer products and our environment.

Gutting protections against toxic chemicals is just one way in which Pruitt has assaulted the environment while in office. He’s also a climate denier and a good friend to the fossil fuel industry.

It’s great when our government checks and balances work on blatant corruption. I’m glad Tom Price lost his job as health secretary when he used private jets at taxpayer expense.

But what about accountability for actually doing your job? Who gets ousted when they’re heading the Environmental Protection Agency but fail to protect the environment? Or they head the Department of Education but let down the nation’s schools?

The Interior Department, led by Secretary Ryan Zinke, just pushed out longtime superintendent of Yellowstone National Park Dan Wenk, presumably over wildlife protection policies (and you can guess who is for protecting wildlife and who is against it).

Lucky for us, Zinke spent $139,000 on fancy new doors for his own office, so maybe he’ll get enough heat that he has to step down. But is protecting the crown jewel of the national park system — and all of our other public lands — contingent on whether or not the secretary failing to protect them also misspent taxpayer dollars?

The huge amounts these corrupt men spent on their own offices and flights is outrageous. But it’s their willingness to sabotage the departments they’re in charge of that’s truly hurting the American people.

Wochit Politics: “Even Friends Of Scott Pruitt Say He Needs To Go”