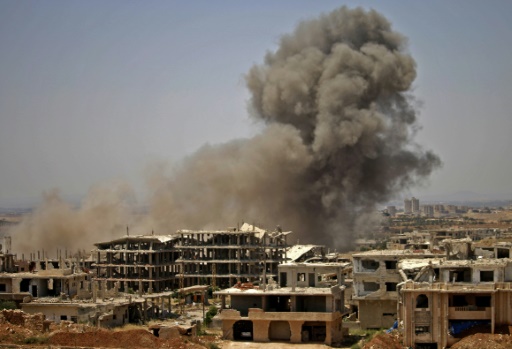 Beirut (AFP) – Facing Russian and regime bombardment and abandoned by international backers Jordan and the United States, rebels in southern Syria are left with few options — all of them unsavoury.

– Where’s the outside support? –

Syria’s south is a strategic zone bordering Jordan and the Israeli-occupied Golan, and easily accessible from the capital Damascus.

Rebels there enjoyed backing by the United States and Arab countries for years through a joint command in Jordan.

But when President Bashar al-Assad’s army began pounding the south with air strikes and barrel bombs on June 19, none of these backers came to their aid.

Instead, Washington sent rebels a written message telling them not to expect US help to fend off the assault, according to a copy of the text seen by AFP.

Jordan, meanwhile, has repeatedly urged the US and Russia to reach a political settlement.

Amman prefers a regime win in the south, analysts say, because it would help reopen the Nassib border crossing and the resumption of lucrative trade.

“The Americans abandoning the rebels and the closing of the Jordanian border look like an international green light for Russia’s campaign in the south,” said Ahmad Abazeid, a researcher from Daraa.

That leaves rebels “with few choices”, he told AFP.

Broadly speaking, rebels have two options: continuing to fight or accepting some kind of negotiated settlement.

“Rebels are facing a set of options where even the best one is bad — they’re stuck between negotiating with Russia through Jordanian mediation, or continuing to resist militarily which will ultimately end with talks under even greater military pressure,” Heller told AFP.

The rebels have almost no chance of winning although they have vowed to fight until the end, which could be a ploy to escalate the stakes and secure a better deal, said Abazeid.

He said they rejected a Russian proposal that would have had them “surrender, hand over heavy arms, and transform willing fighters into a local police force”.

But with the regime’s speedy ground gains, the clock is ticking for rebels — and the longer they drag out the fight, the higher the price for civilians.

Nearly 100 civilians have died since the assault began, according to the Britain-based Syrian Observatory for Human Rights. The United Nations says around 50,000 have been displaced.

“No negotiated settlement will please rebels, but at the same time, it’s impossible for civilians to bear more than their fair share of death and destruction,” said Heller.

With Russian help, the regime has used a blend of military pressure and negotiations to retake territory, including second city Aleppo in 2016 and zones around Damascus this year.

But the deal for the south will look different, said Nawar Oliver, analyst at the Turkey-based Omran Centre.

“The likely scenario for rebels is different than all other areas because of the south’s geographic location and strategic importance,” he told AFP.

The fact that frontlines in the south were relatively cold for years means rebels and regime forces are more willing to talk than in other bitterly-contested areas.

That is partly thanks to the Amman-based joint operations room, said Oliver.

“They spent a lot of energy keeping rebels from fighting (the regime) on several occasions,” to keep the borders with allies Jordan and Israel quiet, he said.

“Forced displacement is unlikely here. What’s more likely is that rebels will be turned into a civilian police force in Daraa’s western countryside,” said Oliver.

Others would turn to fight the Islamic State group, which still maintains a small branch to the southwest.

The contours of a grand bargain, however, remain fuzzy.

“It’s not yet clear what shape the agreement will take,” said Heller.

– What is the regime’s strategy? –

In an interview this month, Assad said he would give talks a chance, but would retake the south militarily if they failed.

But in the interim, shelling has pushed most rebels to withdraw from Daraa’s eastern countryside and forced at least five hospitals to shut.

“The shelling is aimed at cutting off all means of life and to push people out en masse,” said Abazeid.

“The goal is to push rebels to surrender or reconcile the whole area, bit by bit.”