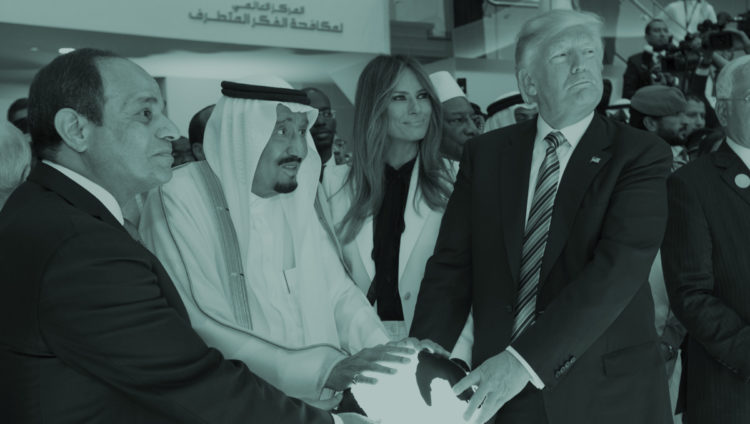 “Well, it is just great to see you all here.

Actually, I’m surprised there are this many of you at my dinner. I thought I’d done a better job of keeping you out of the country!

But I can’t blame you for getting past me. I mean, you’re from those shithole countries, right? Everybody wants to be here. Not here in the White House–can you believe what a dump this is? I mean, here in the USA. Well not the shitty parts of the USA, either. I mean the white parts. Do they let you people live in those parts?

Not to mention I’m amazed you’d come since Islam hates us. But I guess, you know, a free meal is a free meal.

Almost every dinner I go to, I hate the people there. But I only go if there’s a really fancy spread. And chocolate cake. So I don’t blame you. Well, I do, for almost everything. But not for eating dinner with people you hate.

How about that Mohammed Bin Salman, huh? My buddy. Why, he’s going to let women drive.

I’m all for Islamic reform and whatnot, but even I think that’s going a little too far.

But good to see he arrested the women who pressured him into it. That’s the art of the deal, my friend. Give in to pressure a little, but don’t let the people who pressured you enjoy the victory. Especially women.

They wear that burqa thing over there. I hate it. I can’t figure where to grab.

Fleitz tells me it is better for me to do the Iftar this year since the Muslim Brotherhood is so important inside the Federal government. I mean, you practically run the State Department. So I fed you– now give Mike Pompeo a break and stop sabotaging my policies.

I hear you’re upset about my giving away Jerusalem to the Israelis. My advice to you is, get over it. Sheldon Adelson runs mean casinos and he’s got more money than God. He bought Jerusalem off me, fair and square. I don’t care if it is your third holiest city. That means you’ve got at least two others, right? Just be thankful I don’t let Sheldon buy those two, as well. In fact, that gives me an idea . . .

Anyway Netanyahu told me God gave away all the Mideast to the Jews, so you people need to find someplace else to live. Just not here. He says its in the Bible. My grandma in Scotland had a Bible. I think I saw it once in the apartment, somewhere. Maybe the promise is in that Two Corinthians they’re always going on about.

Anyway, I’m glad to have you. No, I mean it. I’m really glad to have you. We’ve got you, real good. I made Chris Wray give me some agents to arrest you and deport you. I hear you practice that sharia thing, something about religious laws. Fasting and jihad and everything. Ugh.

But don’t worry. First, we eat. I hope you enjoy the pork chops.

And the chocolate cake will be divine.