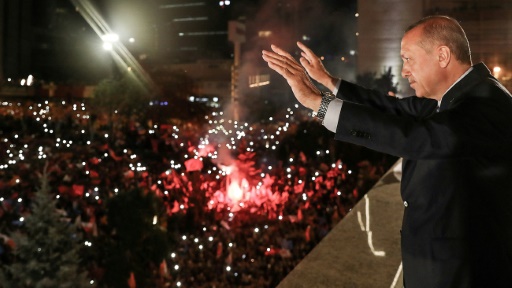 Istanbul (AFP) – President Recep Tayyip Erdogan is set to take a tough line with the West on key foreign policy issues including the Syria conflict, Russian relations and migrants in his new term, but he may also show signs of compromise.

Foreign policy will be immediately on the agenda after Erdogan’s inauguration Monday, as the president heads this week to a NATO summit in Brussels where talks are expected with leaders including US President Donald Trump and German Chancellor Angela Merkel.

Here are the five foreign policy issues Erdogan will need to address during his new tenure:

– Relations with the US –

Turkey and the United States have been at loggerheads over a number of issues, from American support for a Syrian Kurdish militia despised by Ankara to Washington’s failure to extradite Muslim preacher Fethullah Gulen, accused by Ankara of ordering a failed 2016 coup.

“The new Erdogan administration will carry on these negotiations with the hope of fixing the relationship with the US,” said Ozgur Unluhisarcikli, Ankara office director of the German Marshall Fund of the US.

One of the stumbling blocks is US backing for the Syrian People’s Protection Units (YPG), deemed “terrorists” by Ankara and linked to the outlawed PKK militants who have waged a bloody insurgency against the Turkish state since 1984.

However analysts say Washington has been willing to make concessions despite the tensions, as shown by the US delivering its first shipments of F-35 stealth fighter jets to Turkey last month.

Erdogan and his Russian counterpart Vladimir Putin have forged an increasingly strong alliance based on seeking peace in Syria after patching up relations poisoned by Turkey’s downing of a Russian war plane in 2015.

Washington has been particularly concerned by Ankara’s decision to buy Russian S-400 surface-to-air missile batteries, which are not compatible with NATO’s defence systems.

Putin, a frequent guest of Erdogan in Turkey, swiftly congratulated the Turkish strongman on his re-election, saying that the result showed his “great political authority”.

Gareth Jenkins, Istanbul-based non-resident senior research fellow at the Silk Road Studies Program, said “ultimately Erdogan is going to have to choose between the US and Russia –- and he will pay a price whichever he chooses.”

Since the Syrian war erupted in 2011, Turkey has been a fervent opponent of President Bashar al-Assad’s regime and ruled out any form of direct dialogue with Damascus.

Aaron Stein, resident senior fellow at the Atlantic Council, said Turkey has already found a “formula” with the Assad regime.

“It works through Russia to achieve its interests -— and those interests don’t include regime change,” he told AFP.

– Relations with the EU –

Ties between Turkey and the European Union have been particularly strained since the crackdown that followed the attempted overthrow of Erdogan in July 2016, with EU member states calling on Ankara to lift the state of emergency.

However veteran Turkish diplomat Ozdem Sanberk said he believed an era of compromise would start and “relations will reach a more healthy ground than before”.

Turkey and the EU agreed to a deal in 2016 to curb the influx of migrants into Europe which has been criticised by rights groups, but has helped slow down arrivals.

Erdogan, who raised eyebrows in the West when he threatened to send millions of migrants to Europe, was sidelined from the agreement but so far it has remained in place.

Over the past few years Erdogan has pressed what Ankara calls a multi-vector foreign policy and championed the Palestinian cause and those of Muslim minorities around the world.

He has hosted Muslim leaders several times, including earlier this year for a summit aimed at coordinating a united Islamic response to the US decision to recognise Jerusalem as the capital of Israel.

The countries who rapidly congratulated Erdogan on his re-election were symbolic of Ankara’s foreign policy stance, with leaders such as Venezuelan President Nicolas Maduro and Sudan’s President Omar al-Bashir, who have pariah status in the West, among the first to hail his win.

But analyst Jenkins warned that Erdogan would make errors unless he “begins to employ people who both understand foreign policy and are willing to tell him the truth rather than what they think he wants to hear.”