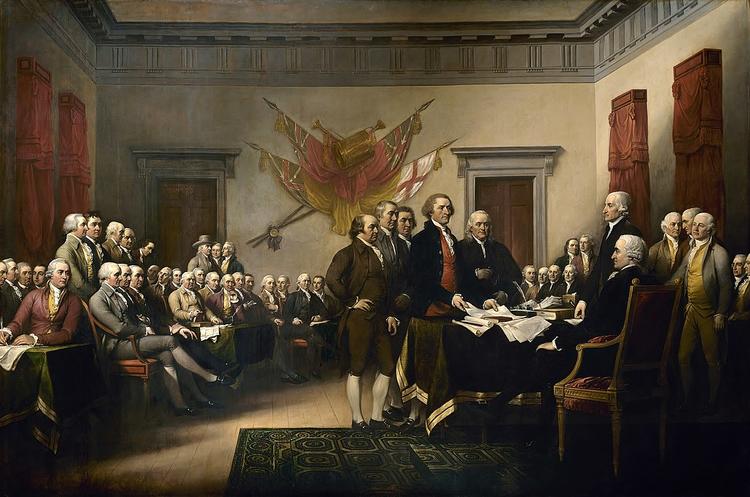 Declaration of Independence (1819), by John Trumbull

In the section of the Declaration of Independence on grievances, there are a number of paragraphs that resonate with today’s politics. The whole authoritarian thrust of Trumpism, with the disregard for rule of law and for checks and balances among the branches of government, runs counter to the key concerns of the Founders.

*Trump keeps saying he’ll do whatever the generals advise him to do. This is a direct violation of the Founding Generation’s commitment to civilian control of the armed forces. They complained of the king in the Declaration of Independence:

“He has affected to render the Military independent of and superior to the Civil power.”

* The Founding Generation deeply believed in immigration, and resented the reluctance of King George to allow immigrants into the 13 colonies. They signed on to Thomas Jefferson’s complaint in the Declaration:

“He has endeavoured to prevent the population of these States; for that purpose obstructing the Laws for Naturalization of Foreigners; refusing to pass others to encourage their migrations hither . . .”

The British crown saw non-British immigrants as lacking loyalty to the empire, i.e. as potential subversives, while the colonists were aware that a thin population was a brake on economic growth.

Turkey has taken in 2.5 million Syrian refugees since 2011, and has been growing around 4 percent a year. The International Monetary Fund believes that Turkish growth would have been negligible without the immigrants, who spurred growth.

Trump implies that stagnating wages are owing to immigrants. In fact, economists have determined that wage stagnation comes from the destruction of unions.

*Another grievance had to do with the independence of the judiciary, which they believed the king had undermined. Trump, in his attacks on the Mueller investigation, on the Department of Justice, and on judges who cross him, is guilty of the same sort of interference in the judiciary. They complained of King George III:

“He has obstructed the Administration of Justice, by refusing his Assent to Laws for establishing Judiciary powers.

He has made Judges dependent on his Will alone, for the tenure of their offices, and the amount and payment of their salaries.

Trump hasn’t committed exactly the same breaches of the separation of powers, but some of his statements and actions are certainly in the spirit of empowering the executive over the judiciary. As keen readers of Montesquieu’s Spirit of the Laws, the Founding Generation objected.