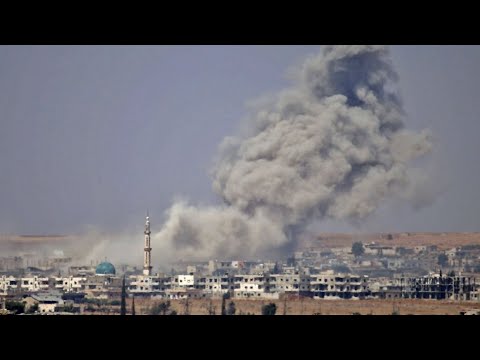 Rebel sources are saying that they have reached a framework for surrender in Deraa with Russia and the al-Assad government. If these reports are true, it is another step toward complete victory.

The rebels say they have declared a ceasefire and have put down their arms after they negotiated through the Russians.

Regime troops have taken the border town of Nasib on the Jordanian border, a position held for the past 3 years by the rebels, and Russian military police are now said to be patrolling some of the Syrian border with Jordan in Russian armored vehicles. About half the border town checkpoints are said already to be in the hands of the Syrian government.

These developments come after two weeks of intensive Russian air bombardment in support of the advance of Syrian Arab Army troops.

Deraa Province constituted the last large stronghold of the rebels in the south of the country, along with parts of Quneitra that stretch into the Golan Heights (part of which has been occupied by the Israeli military since 1967). The al-Assad government is also making a push on Quneitra as well.

Rebel sources told the Arab press that the agreement offers civilians and fighters amnesty as they are reincorporated into Syria, with the Russians as guarantors.

Israel is saying that as al-Assad restores control to areas close to Israel, it will continue to honor the 1974 armistice and to honor the demilitarized zone it established between Israel and Syria. An al-Qaeda-linked rebel group has held positions in Quneitra near Israel for the past few years, and allegedly has received some Israeli support. This Israel-al-Qaeda alliance had provoked tensions with the Druze, an esoteric offshoot of Ismaili Shiite Islam, that exists in Israel, southern Syrian and in Lebanon. The al-Qaeda-linked group had targeted Druze.

The reestablishment of full Syrian government control over the part of the Golan Heights of which it retained control after 1973 seems imminent, and Israeli security circles see ready to deal with al-Assad’s return.

The last two significant territories over which the Syrian government has not yet reestablished control are Idlib province in the northwest and the Kurdish-controlled provinces of al-Hasaka and Raqqa and parts of Aleppo province, plus part of Deir al-Zor. The Kurds will likely not be conquered but rather offered a federal position to come back under the sway of Damascus (the Kurds are backed by 2000 US special operations force and more US contractors). As for Idlib, it seems likely to be the next big campaign by the regime, though the support Turkey for some of the groups there complicates the planning of al-Assad and Vladimir Putin in this regard.