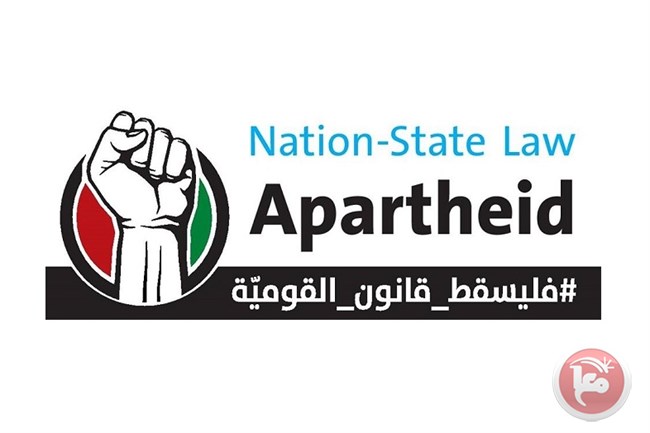 JERUSALEM (Ma’an) — Members of the High Follow-up Committee for Arab Citizens of Israel announced on Tuesday the launch of their own struggle against the controversial Nationality Law, demanding its cancellation.

The High Follow-up Committee for Arab Citizens of Israel turned to the EU foreign policy chief, Federica Mogherini, and the UN Secretary-General, Antonio Guterres, demanding them to immediately intervene and support the cancellation of the law.

Muhammad Barakeh, head of the High Follow-Up Committee, said in a statement “we’re saying these things not on behalf of a party or a movement in the Arab population, but on behalf of the Arab public in general.”

Barakeh stressed that “we demand the unconditional cancellation of the law.”

Adalah, the Legal Center for Arab Minority Rights in Israel also filed a petition to the Israeli High Court of Justice against the Nationality Law, calling it a bid to progress “ethnic superiority by promoting racist policies.”

Adalah said that the law “has distinct apartheid characteristics” and denies “civil and national rights of Palestinians in their homeland.”

On Saturday, tens of thousands opposing the law had demonstrated against it in Tel Aviv, calling for its annullement to ensure equality for Israel’s non-Jewish minorities.

The law, which was passed by the Israeli Knesset in July, enshrines the status of the State of Israel as the nation state of the Jewish people and includes legally preserving Israel’s “democratic” character, its state symbols (national anthem, flag, icon), Jerusalem as the capital of Israel, Hebrew as the official language and the right of return for Diaspora Jewry.

Meanwhile, the Arabic language will receive a “special status” as Israel’s second official language. The law, however, would not require making state services accessible in Arabic.

Critics of the law raised concerns that it will permit the exclusion of various populations, based on nationality or religion, and allow the illegal establishment of Jewish settlements and communities only.

Meanwhile, supporters believe it ensures the Jewish character of the state for generations to come.

BETHLEHEM (Ma’an) — Israeli Minister of Justice, Ayelet Shaked, warned of an “earthquake” to occur in the case that the Israeli High Court of Justice decides to overturn the controversial Nationality Law.

According to Times of Israel news outlet, during an interview with the official Israeli Army Radio, Shaked said that the Israeli High Court has no right to strike down the law on constitutional grounds, because it was passed as a Basic Law. 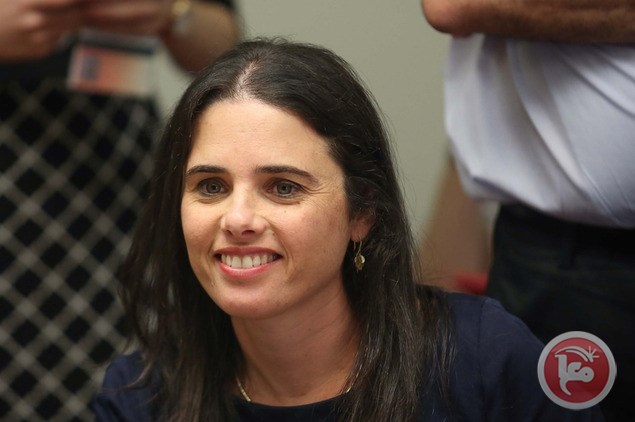 Shaked stressed that “such a move would cause an earthquake between different authorities.”

Shaked added that “the Knesset is the constituent assembly, which defines and determines the Basic Laws. The High Court justices have to interpret the laws in accordance with the Basic Laws,” explaining that she doesn’t believe the majority of the High Court would take such a step.

Shaked restated her support for the controversial law, which has been labeled as racist against non-Jewish minorities.

Since the law was passed in July, at least three petitions have been submitted to the Israeli High Court, demanding that the justices overturn the law for its discrimination.

One of the petitions was filed by Adalah, the Legal Center for Arab Minority Rights in Israel, against the Nationality Law, demanding the Israeli High Court to overturn it for its discrimination.

The petition was submitted on behalf of all of the Arab political leaderships in Israel, the High Follow-Up Committee for Arab Citizens of Israel, the National Committee of Arab Mayors, the Joint List parliamentary faction and in the name of Adalah, against the Knesset, according to an Adalah press release.

The petition stated that “there is no single constitution in the world today that declares in its laws that it will act to advance the interests of the dominant group, particularly when it concerns public resources such as land.”

The Nationality Law enshrines the status of the State of Israel as the nation state of the Jewish people.

The law includes legally preserving Israel’s “democratic” character, its state symbols (national anthem, flag, icon), Jerusalem as the capital of Israel, Hebrew as the official language and the right of return for Diaspora Jewry.

Critics of the law raised concerns that the law will deepen a sense of apartheid within the Arab community, which has become a minority over the years.