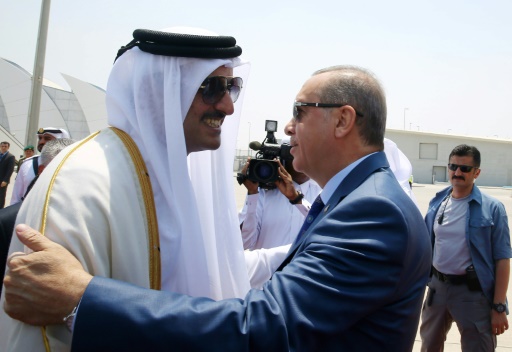 Doha (AFP) – The emir of wealthy Qatar flew to Turkey Wednesday to meet close ally President Recep Tayyip Erdogan in an apparent show of support as Ankara grapples with a currency crisis.

The emir “will discuss with the Turkish president bilateral relations and means of strengthening the existing strategic cooperation between the two countries in various fields,” said a Qatar News Agency statement.

Qatar promised to make a $15 billion direct investment in Turkey, badly hit by a currency crisis amid a widening diplomatic standoff with the United States, officials said.

“Turkish-Qatari relations are based on solid foundations of true friendship and solidarity,” he said.

Erdogan thanked the emir and the people of Qatar for “standing by Turkey,” the official Anadolu news agency reported.

He said relations with Qatar, which he described as a “friendly and brotherly country,” would be boosted in many areas.

Turkish Finance Minister Berat Albayrak, who is Erdogan’s son-in-law, and his Qatari counterpart Ali Sharif Al-Emadi were present at the talks in the capital Ankara.

Turkey has been rocked in recent days by a sharp decline in the value of its lira after US President Donald Trump tweeted last Friday that Washington was doubling aluminium and steel tariffs for Ankara.

Washington’s move came during an ongoing dispute over Turkey’s holding of an American pastor for two years.

In response, Erdogan has called for a boycott of US electronics goods.

The turmoil has raised fears of a looming economic crisis in Turkey and prompted alarm that foreign investors in the country, including Qatar, could be hit in the fallout.

Turkey and Qatar have become close economic and political partners in recent times.

Doha has $20 billion worth of investments in Turkey, official figures showed last month, and Ankara is now one of the top exporters to the emirate.

In recent days, Qatari supporters of Turkey have begun a public campaign in Doha to change their riyals into lira in an attempt to shore up the plunging Turkish currency.

It is believed many Qatari investors could be at risk from a Turkish economic crisis.

Underscoring the ties between the countries, Sheikh Tamim was the first foreign leader to phone President Erdogan during the aborted coup in Turkey in 2016.

And Ankara has been conspicuous in its support of Doha as Qatar battles with continued Saudi-led isolation from Arab neighbours.

Turkey also maintains a small military base in Qatar.