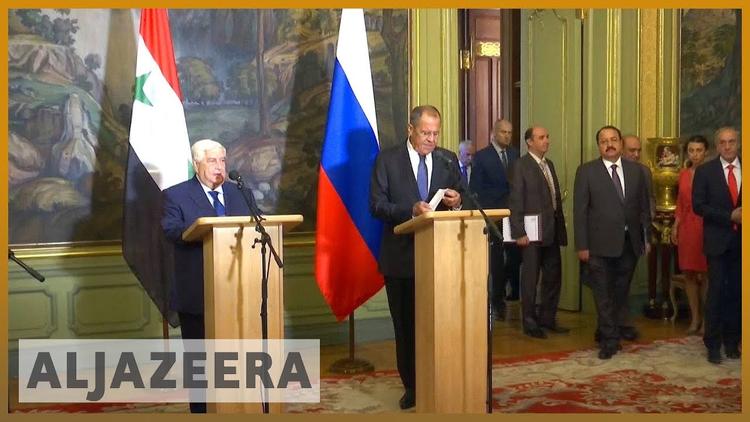 Ann Arbor (Informed Comment) – AFP reports that President Trump is cautioning the Syrian regime against launching an all-out assault on the last remaining rebel stronghold of Idlib Province. He also said that Russia and Iran would be making “a grave humanitarian mistake” to take part.

It is hard to take the humanitarian part too seriously. This is a man who in 2016 promised to carpet bomb ISIL, which is pretty much what Russia plans to do to the HTS (Committee to Liberate the Levant, formerly Nusra Front), with its links to al-Qaeda.

President Bashar al-Assad of Syria must not recklessly attack Idlib Province. The Russians and Iranians would be making a grave humanitarian mistake to take part in this potential human tragedy. Hundreds of thousands of people could be killed. Don’t let that happen!

Obviously, Trump did not actually send out this tweet, given its articulate grammar and lack of misspellings plus the lack of phrasal emoticons (sad!). It is an expression of the public position of his national security team– NatSec Adviser John Bolton, Secretary of State Mike Pompeo, and possibly Secretary of Defense Jim Mattis. It isn’t Trump’s policy. For one thing, the tweet mildly criticizes Russia, which Trump almost never does. The foreign policy team also doesn’t really care about civilians in Idlib, but just doesn’t want to see another military victory for which Iran is partially responsible, which strengthens Tehran in the Levant (which detracts from unilateral Israeli power in the region).

Moreover, the tweet is toothless. Trump has already announced that he wants out of Syria. (“Why are we still there?!” he is alleged to have fumed earlier this summer). He initially seems to have wanted to pull out by the beginning of October so that Republican lawmakers could run on having defeated ISIL and gotten out of Syria. He appears to have been convinced to delay that withdrawal, though who knows?

Further, Trump has already said that he thinks Syria would be better off with a strongman like Bashar al-Assad in control.

In any case, the US is not actually in a position to stop an Idlib campaign. Its primary allies in Syria, the Kurds of the northeast, are as eager as the Assad regime to see an end put to the fundamentalist Arab Muslim militias of the northwest, who have made no secret of their hatred for the secular-minded leftist Kurds and who have closely cooperated with Turkey in ethnically cleansing Kurds from the western canton of Afrin. So the US cannot deploy its Kurdish proxies to stop an Idlib campaign. In fact, it may be that members of the YPG Kurdish militia will actually join in on the side of the regime, Iran and Russia.

The US only has a couple thousand special operations personnel in northeastern Syria, who are frankly irrelevant to any Idlib campaign in the northwest. The US Air Force is not going to interfere in an operation of the Russian Federation Aerospace Forces in northwest Syria, which is not an American sphere of influence.

Mind you, despite the cynical game of public relations being played by the Trump team, the prospect is horrifying, of a massive assault by Syrian armor and artillery, Shiite militias from Lebanon, Iraq and Iran, and Russian fighter jets on a rural province where 3 million people, the bulk of them refugees, are huddling. While a significant proportion of Idlib is held by extremist militias and Brett McGurk has admitted that it is the biggest concentration of al-Qaeda fighters since 9/11, the 3 million civilians are not extremists, and perhaps 40% of the militias aren’t either.

The looming Idlib campaign will likely replicate the vast destruction and loss of life of the Mosul campaign, where it was the US that gave air support to the Iraqi army.

This business of re-subduing national territory that went into rebel hands by a frontal assault and intensive bombardment, producing high civilian casualties and destruction of entire city districts, is a horrible recrudescence of total war tactics from World War II.

I very much doubt that the large orange man in the White House is relevant to any resolution of this looming catastrophe.

It would be better, as the Crisis Group argues, if a negotiated settlement could be reached.

It is pie in the sky, but political compromise would be a better outcome for Syria. It would be better for the country if Turkey could sideline the HTS and then the regime negotiated a decentralization of Syria with a federal constitution that accommodated the religious conservatism of Idlib and the Bukchenist Left Anarchism of the northeastern Kurds. Syria needs a framework for working out political disputes peacefully, through elections (the ruling Baath Party does not believe it would win, but I’d wager they’d get a majority, given the alternatives).

A heavy-handed Putinist attempt to restore a one-party state in Syria, as though it were a big Chechnya, is more likely in the medium and long term to produce either chronic instability or a generation of zombie-like and debilitating stagnation than a genuine social peace.

But, none of the sides in this seven-year-old conflict have demonstrated a taste for compromise, with the possible exception of the Kurds. The Syrian, Russian and Iranian foreign ministers have indicated that they think the rebels in Idlib are all terrorists and must be purged for the sake of the peace of the region.

I have a sinking feeling that Very Bad Things are about to happen in northwest Syria.