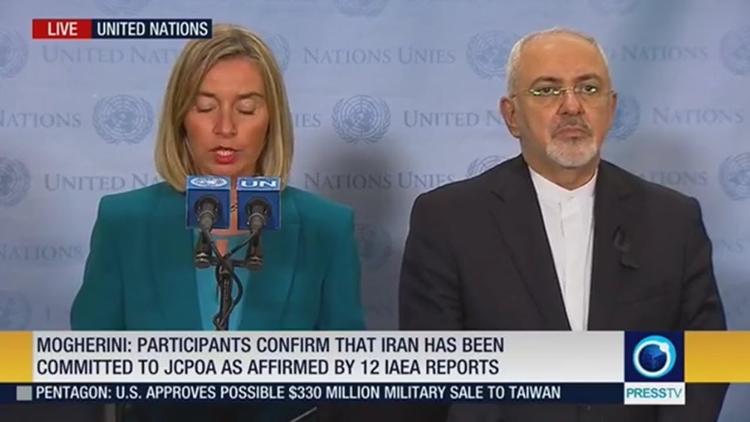 Ann Arbor (Informed Comment) – Frederica Mogherini, the High Representative of the European Union for Foreign Affairs, chaired a special session of foreign ministers on the margins of the United Nations General Assembly meeting aimed at outmaneuvering Donald Trump on the Iran Deal.

The meeting was attended by the European Union “Big Three,” i.e. Britain, France and Germany (the E3), plus Russia and China. So four of the five members of the UN Security Council participated. The US was conspicuous by its absence.

In my whole 65 years I have never heard about 4 members of the UN Security Council meeting without the US and with the express purpose of outflanking Washington Policy! This is both weird and ominous.

These signatories of the 2015 Joint Comprehensive Plan of Action (JCPOA) with Iran reaffirmed their complete commitment to the agreement, which British Prime Minister Theresa May recently acknowledged was being scrupulously observed by Iran.

The Iran Deal, which US president Donald Trump has violated, guaranteed Iran a lifting of international sanctions in return for it accepting severe restrictions on its civilian nuclear enrichment program.

The document issued by the E3, joined by the European Union in the person of Mogherini and by Russia and China, acknowledged that sanctions relief was key to making the deal work:

“6.Participants underlined their determination to protect the freedom of their economic operators to pursue legitimate business with Iran, in full accordance with UN Security Council Resolution 2231.

7. The participants equally highlighted the extensive work and substantial progress undertaken to date, the intensiﬁcation of technical dialogues, efforts to maintain and improve bilateral economic relations, and the mobilisation of considerable resources by all, including with third countries interested in supporting the JCPOA and in pursuing, in a timely and effective manner, the normalisation of trade and economic relations with Iran.

8.In this context, the participants welcomed the fact that updates to the EU’s “Blocking Statute” and the European Investment Bank’s external lending mandate to make Iran eligible entered into force on 7 August.”

What point 8 above is saying is that the EU is making available to Iran the European Investment Bank as a means of trading with the world. The Trump administration has barred Iran from using US banks or currency, and is threatening third party sanctions on countries that so much as buy Iranian petroleum.

This quasi-military use of America’s position as provider of the world reserve currency in the form of a dollar was sure to produce pushback from Europe, Russia and China.

The European Union is now saying Iran can use its bank and can sell its oil in Euros, which removes transactions from the oversight of the US Department of the Treasury. All the US can do now is try to sanction the European Investment Bank. But since there is no longer any US Security Council decree placing sanctions on Iran (that lapsed in January of 2016), there is no reason in principle for European countries or concerns to cooperate with the US in boycotting Iran.

Mogherini afterward met with Iranian foreign minister Javad Zarif, in hopes of reassuring him that the nuclear deal can be kept alive.

Larger firms such as the French oil giant Total S.A. and the French automaker Renault have already fled Iran in advance of Trump’s Nov. 1 deadline. It is only the smaller firms that have little or no trade with the US that can afford to do business with Iran, and they likely can’t generate enough such business to make the JCPOA worthwhile.

Still, it is an incredible sight to see a rump UN Security Council attempting to keep world peace via the Iran deal, in the face of warmongers like Trump, Pompeo, and Bolton.

Ronald Reagan had a fantasy, at a time when Russia, China and the US were the major powers and often hostile to one another, that an attempted invasion from outer space might unite humankind.

Reagan was right, that an external threat could bring the world together. What he couldn’t imagine was that it would be a rogue Washington that accomplished the uniting.