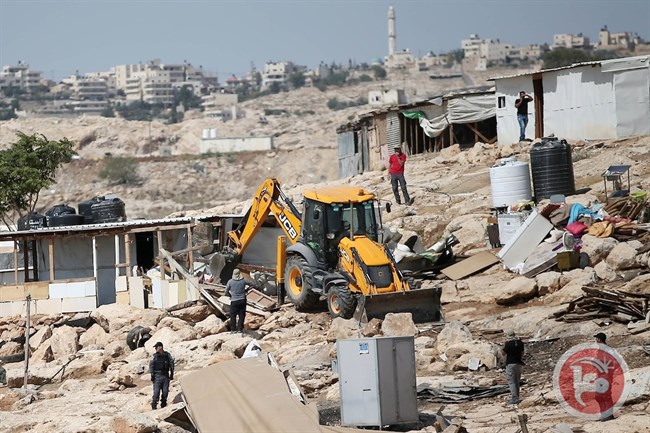 JERUSALEM (Ma’an) — Head of the Palestinian Authority (PA) Committee against the Wall and Settlements, Walid Assaf, declared on Wednesday the beggining of an open sit-in at the Khan al-Ahmar village east of the Jerusalem district in the central West Bank protesting the Israeli decision to demolish it.Assaf’s decision came after the Israeli High Court rejected an appeal against the demolition of the village and ruled for its evacuation and demolition to take place within 7 days.

Assaf pointed out that there are not any legal procedures that could be taken following this order, adding that the only choice at this point is mass presence at Khan al-Ahmar to prevent the demolition.The Palestinian government said in a statement that it “deplores the decision of the Israeli Supreme Court, backed by the Israeli right-wing government to give the occupation forces the authority to commit an International crime by forcibly displacing and transferring 180 Palestinian citizens of Khan al-Ahmar village, east of occupied Jerusalem. 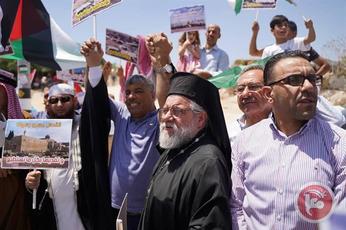 “Spokesperson of the Palestinian government, Youssef al-Mahmoud, said that “demolishing Khan al-Ahmar and displacing its residents is ethnic cleansing.”Al-Mahmoud added that “this policy aims to force the original people of this land to leave their land and homes and therefore it is an actual implementation of ethnic cleansing.He called upon the international community to hold its responsibility towards the Palestinian people and end Israeli attempts to undermine international efforts to bring peace, security and stability to this region.

The spokesperson of the Fatah movement, Usama al-Qawasmi, said that the court ruling is political, racist and violates all international laws.Al-Qawasmi added that the ruling is also an assault to the original owners of the land.He called upon Palestinians to gather and defend Khan al-Ahmar against the “barbaric” decision of the Israeli authorities.The B’Tselem human rights organization said in a statement titled “The Supreme (High) Court in the Service of the Occupation,” that “in their ruling, Justices Amit, Meltzer, and Baron described an imaginary world with an egalitarian planning system that takes into account the needs of the Palestinians, as if there had never been an occupation.

“The reality is diametrically opposed to this fantasy: Palestinians cannot build legally and are excluded from the decision-making mechanisms that determine how their lives will look. The planning systems are intended solely for the benefit of the settlers.”B’Tselem also said that “this ruling shows once again that those under occupation cannot seek justice in the occupier’s courts. If the demolition of the community of Khan al-Ahmar goes ahead, the Supreme (High) Court Justices will be among those who will bear responsibility for this war crime.

“Khan al-Ahmar has been under threat of demolition by Israeli forces; the demolition would leave more than 35 Palestinian families displaced, as part of an Israeli plan to expand the nearby illegal Israeli settlement of Kfar Adummim.Last month, residents of the village had declared the they would not leave their village or agree to be transferred anywhere else. Prior to that, the Israeli High Court had held a hearing session to discuss the appeal submitted by a Palestinian lawyer on behalf of Khan al-Ahmar residents against their displacement and the demolition of their village.