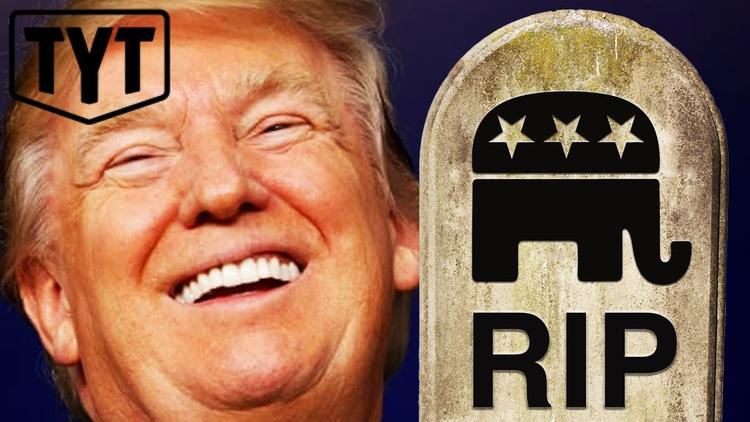 (Foreign Policy in Focus) – Critics like that anonymous op-ed writer have no problem with how Trump’s actually hurting people. They just want the leader doing it to look more presidential.

The recent anonymous op-ed in The New York Times about the resistance to Trump within his own administration was supposed to reassure the American people. Don’t worry, the writer was saying: We the “steady state” are making sure that an unhinged president doesn’t blow up the world. Behind the scenes, the “adults in the room” are hoodwinking the president so that Americans can sleep soundly at night.

The anonymous author, after all, also proudly proclaims that his cohort of semi-dissidents “want the administration to succeed and think that many of its policies have already made America safer and more prosperous.”

Anonymous is thrilled that the administration has successfully pushed through “effective deregulation” (like gutting the Environmental Protection Agency), “historic tax reform” (shifting billions of dollars from the poor and middle class to the 1 percent), and “a more robust military” (wasting precious resources that could be used to rebuild U.S. infrastructure and help Americans in trouble).

Like most of the Republicans in Congress, in other words, Anonymous ignored all the warning signs (actually, the screaming headlines) that Donald Trump was unfit for office and supported his efforts anyway in order to push through all the programs dear to the hearts of the conservative movement.

Yes, I’m delighted that there are people in the administration who are aghast at Trump’s attacks on the media, his embrace of dictators, and his overall erratic behavior. It’s embarrassing that the bar has dropped so low that such obvious objections should qualify as worthy of comment much less controversy.

I’ll support Anonymous just like I support the Colin Kaepernick ads despite Nike’s failure to pay livable wages to its workers. Sometimes you have to praise the action and ignore the actor.

But the question remains: Why did Anonymous do it? It’s a big step to declare yourself a mole inside one of the most vindictive administrations of all time. The cloak of anonymity is surely not sufficient. Most people wouldn’t cross Trump this way without enormous legal pressure or the promise of a witness protection program.

I’m not convinced that Anonymous published the article as a preemptive plea bargain for some future Nuremburg-like trial that passes judgment on those who worked in the Trump administration. Such a person could document their efforts quietly without publishing an op-ed in The New York Times.

No, I think it’s part of an effort within the Republican Party that will gain strength over the next two years: to build a movement of Trumpism without Trump.

Anonymous wants a president who acts more like a conventional leader and, on such issues as free trade, more like a conventional conservative. The internal resistance knows that Trump’s days in office are limited — by his own incompetence and criminal venality, by the prospect of impeachment hearings, or by the actions of voters. These semi-critics want to safeguard their supposed achievements and detach them somehow from the stigma of Trump himself.

The Anonymous op-ed is a call not for a coup within the administration — for instance, through the invocation of the 25th amendment — but rather for a schism within the Republican Party.

As Republican strategist Alex Castellanos described it in Politico back in April: “We don’t have to wait for November’s cataclysm. We can begin now with a strategy to harness Trump’s base and add swing voters, even as we remain faithful to our principles.” In other words: Strip away the numerous dead leaves on the Republican Party and hope that what remains can survive the Trump infestation.

Despite Trump’s obvious failings, such a schism is no easy task. What Anonymous finds appalling — the qualities that make the president a populist and not just a right-wing conservative looking out for number one (percent) — is precisely what endears Trump to his hardcore supporters. They don’t want him to act presidential. They don’t want him to rein in his worst tendencies. They like his unpredictability, they applaud his attacks on the press, and they believe his bombast. They want Trump to be Trump.

“As a sheer political matter, there can be no such thing as Trumpism without Trump, or Anti-Trumpism without Trump, or Anything Else without Trump,” Rich Lowry declared last year in Politico. Ed Gillespie, the right-wing Republican candidate for governor of Virginia, lost decisively in the December election after he tried to distance himself from Trump. It’s not clear whether Gillespie would have done any better if Trump had supported him more vigorously. Still, Lowry and other conservatives insisted on their takeaway: Trump owns the Republican Party, so get with the program.

The other objection, from conservative columnist Ross Douthat, is that any attempt within the Republican Party to drain off populism will only backfire. The internal resistance might save the country from any number of dunderhead moves, “but it will not save the country or its party from populism,” Douthat writes. “It will only make the next surge that much stronger, and ease the next Donald Trump’s ascent.”

But the next Republican politician who comes along will probably borrow just enough of Trump’s populism to get elected. Someone like Tom Cotton, the Republican senator from Arkansas, is just the kind of political figure that Anonymous might choose to lead the party to the Promised Land, someone for whom populism is a condiment rather than the main dish.

Consider this excerpt from a Tom Cotton speech:

What I don’t think they realize is that out here in Arkansas and the heartland and the places that made a difference in that election, like Michigan and Wisconsin, when we hear that kind of ridicule, we hear them making fun of the way we look, and the way we talk, and the way we think.

Cotton went to Harvard as an undergraduate. He went to Harvard Law School. He clerked for an Appeals Court judge. He worked at a prestigious law firm. After serving in the military, he did consulting work for McKinsey. And now he is a member of the Senate.

In other words, Tom Cotton is without doubt a member of America’s elite. And yet, he is able to traffic in all the idioms of populism by emphasizing his Arkansas origins.

Indeed, despite Trump’s predilection for fast food and limited vocabulary, he has few of the credentials of a populist. Cotton can talk the talk. Meanwhile, his foreign policy is just like John Bolton’s and his domestic agenda is basically slash-and-burn economics and anti-government politics. When he was a member of the House, the Arkansas Times said that his voting record was “extreme even for a Republican.” In the Senate, he’s

President Cotton is the even more perilous future in store for America. There won’t be an internal resistance inside a Cotton administration because he would behave just like all the other “adults in the room” he appoints. He’d run up the flag and both Rich Lowry and Ross Douthat — not to mention the neocons, the nativists, and the know-nothings — would stand and salute. It would be all the worst aspects of the Trump agenda without the worst aspects of Trump himself.

So, I’ll certainly join hands with Anonymous to rid America of its present danger. But let’s not kid ourselves about the future danger that Anonymous wants instead.

The Young Turks: “Will The Republican Party Survive Trump?”