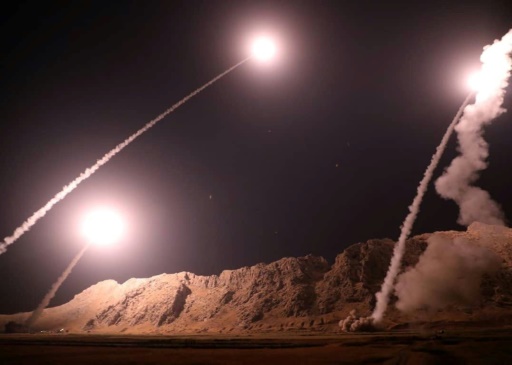 Tehran (AFP) – Iran said it struck jihadists on Monday in Syria with ballistic missiles and combat drones in retaliation for a deadly attack on an Iranian military parade, warning the “real punishment” was still to come.

Last month’s shooting in the Iranian city of Ahvaz killed 24 people and was claimed by the Islamic State jihadist group.

The pre-dawn strike by Iran, which has vowed to boost its ballistic missile capabilities despite Western concerns, targeted the town of Hajin, about 24 kilometres (15 miles) north of Albu Kamal near Syria’s eastern border with Iraq, state TV reported.

“The headquarters of those responsible for the terrorist crime in Ahvaz was attacked a few minutes ago east of the Euphrates by several ballistic missiles fired by the aerospace branch of the Revolutionary Guards,” the Guards said on their website.

“Based on preliminary reports, many takfiri terrorists and the leaders responsible for the terrorist crime in Ahvaz have been killed or wounded in this missile attack.” 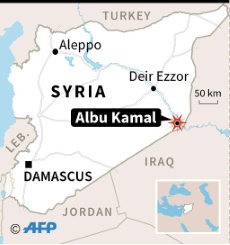 Foreign ministry spokesman Bahram Ghasemi said the strike targeted “a recognised and specific focal point of terrorists on the east of the Euphrates”.

“It was necessary,” he said.

Six medium-range ballistic missiles were fired from western Iran at 2:00 am (2230 GMT Sunday), dealing a “fatal blow”, the Guards said.

“The first stage of avenging the Ahvaz terrorist attack is complete, and other stages of revenge are still to come,” he said.

Local media have reported that based on published images, the drones were locally produced “Saegheh” craft, reverse-engineered from the American RQ-170 Sentinel captured by Iran in 2011.

Bagheri said the strikes were the first time the drones had “crossed multiple countries and reached their targets”.

The Syrian Observatory for Human Rights, a Britain-based war monitor, said “heavy explosions took place at dawn in the last pocket (of Syrian territory) under IS control near Albu Kamal”.

The town of Albu Kamal is held by regime forces and allied regional militiamen who seized it from the jihadist group as its cross-border “caliphate” crumbled in 2017. 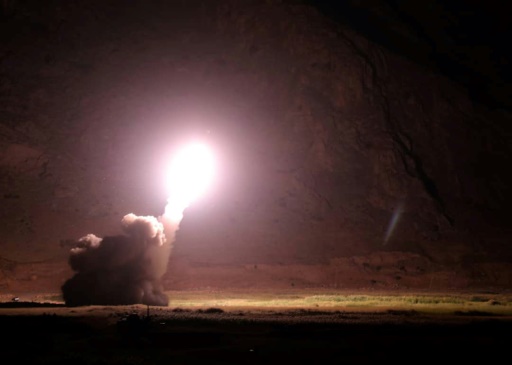 Iran’s Fars news agency said the Zolfaghar and Qiam missiles had a range of 750 kilometres and 800 kilometres (465 and 500 miles) respectively.

“On at least one of the missiles was written ‘death to America’, ‘death to Israel’ and ‘death to Al Saud’,” it said, a reference to the ruling family in Saudi Arabia, Iran’s regional rival.

The Guards released pictures of what appeared to be missiles lighting up the night sky, leaving trails of smoke as they soared above a desert region with a rugged mountain in the background.

Houshang Bazvand, the governor of Kermanshah, from where the missiles were reportedly launched, has denied reports on social media that one of the weapons crashed inside the province.

Iranian President Hassan Rouhani had promised a “crushing” response to the September 22 attack by five gunmen on the military parade in Ahvaz, a mainly ethnic Arab city, while the Guards threatened “unforgettable revenge”.

The missile strike “was only a jab against these criminals. The real punishment is yet to come,” General Mohsen Rezai, former commander-in-chief of the Guards and now secretary of Expediency Discernment Council, wrote on Twitter. 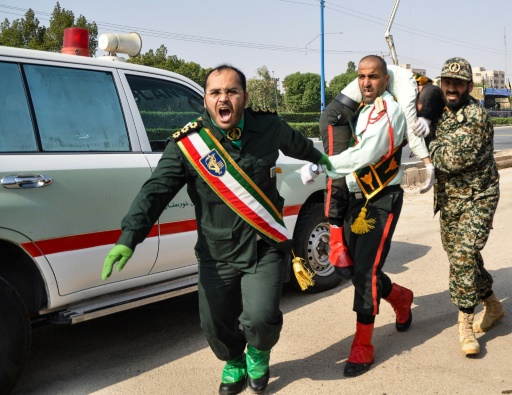 ISNA/AFP / BEHRAD GHASEMI. This picture taken on September 22, 2018 in the southwestern Iranian city of Ahvaz shows an Iranian soldier carrying an injured comrade at the scene of an attack on a military parade.

But supreme leader Ayatollah Ali Khamenei later appeared to link the perpetrators to jihadists operating in Iraq and Syria, where IS once had major strongholds.

“This cowardly act was the work of those very individuals who are rescued by the Americans whenever they are in trouble in Iraq and Syria and who are funded by the Saudis and the (United) Arab Emirates,” Khamenei was quoted on his official website as saying.

The Guards accused the United States, Israel and the “reactionary regimes” of the Middle East of supporting the “terrorists” in eastern Syria who carried out the attack, and said they always been ready to respond to Iran’s enemies.

IS, which Iran and its Damascus ally are fighting in Syria, said all five of the Ahvaz attackers were Iranian, including four from the city.

The jihadists also threatened to carry out more attacks in Iran.

IS had already claimed responsibility for twin attacks in June 2017 on the parliament and the tomb of revolutionary leader Ayatollah Ruhollah Khomeini in Tehran that killed 17 people.

After that assault, the Guards said they had fired missiles into Syria that had successfully hit IS targets.

The guards have a heavy official presence in Syria as “military advisers” in support of the Bashar Assad regime.