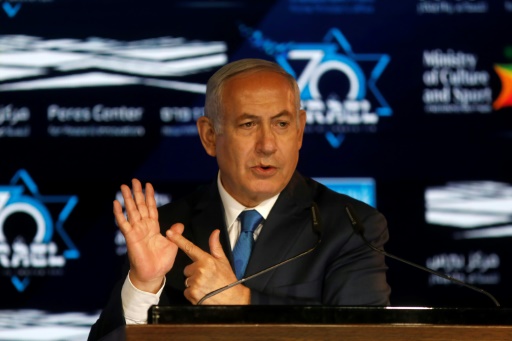 Jerusalem (AFP) – Israeli Prime Minister Benjamin Netanyahu has accused the Jewish state’s president and a former minister of conspiring to have him toppled, triggering charges of “paranoia” ahead of elections.

“I know that a former Likud minister has been holding discussions with the coalition and concocted a subversive plot, with me winning a large victory at the next elections and him making sure I am not prime minister,” he told a gathering of his right-wing Likud party on Wednesday night celebrating his 69th birthday.

Under the scheme, President Reuven Rivlin would use his prerogative as head of state to name an alternative Likud candidate to head a post-election government.

Although Netanyahu did not explicitly name him, Gideon Saar, a former minister and leading rival within Likud, on Thursday publicly denied any such manoeuvre, while Rivlin mocked it as “paranoia” on the premier’s part.

Israel’s next legislative elections are scheduled for November 2019 but early polls could be held in case of a crisis within Netanyahu’s ruling Likud-led coalition.

“If Netanyahu decided against moving up the elections it’s not because President Rivlin or former Likud minister Saar is out to get him, but rather to avoid coinciding with an indictment that might lose him the elections,” Haaretz newspaper commented.

Netanyahu, who maintains his innocence in several corruption cases, is not obliged to step down as prime minister even if he is formally charged.

AFP / MENAHEM KAHANA. Israeli Prime Minister Benjamin Netanyahu gestures during a visit of the Chinese Vice President at the Israeli Innovation Summit in Jerusalem on October 24, 2018.