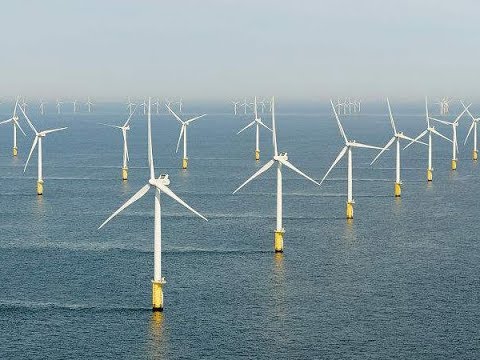 Ann Arbor (Informed Comment) – The Financial Times buries its lead, focusing on an expected rise of offshore wind in the Asia-Pacific, but noting at the end of the article that the Asia-Pacific is expected to add 355 gigawatts (GW) of new solar capacity over the next five years. Edward White in Taipai slights this huge increase in solar power because the rate of growth in solar is expected to fall slightly.

(A gigawatt is a billion watts, and on average an energy facility that produces a gigawatt of power can provide electricity to 700,000 homes or nearly enough to power all of Houston [pop. 2.3 mn.]). So what is being said is that the Asia-Pacific in only 5 years will add 355 Houstons worth of electricity generation. On the other hand, Houston is tiny in Chinese terms. Here are their top ten cities by population:

So Shanghai alone needs at least 10 times as much electricity as Houston.

Another FT piece notes that China increased its solar power capacity by 50 gigawatts in 2017, more electricity generating capacity thn was achieved by new coal, gas, and nuclear power combined. China in one year put in more solar than exists in all of France and Germany together. And it put in nearly as much solar in 2017 as the United States has ever installed (58 GW) since the beginning of solar technology.

That rate of expansion of solar in China will slow, but it still plans to install 223 GW of new solar capacity by 2025. If they kept on their current course it would be more like 350 GW of new solar. So yes, that is a fall in the rate of increase. But 223 gigawatts is nothing to sneeze at. And, given the steady fall in prices of solar panels and expected technological breakthroughs in panel efficiency and battery storage, these projections could well be way too conservative.

White instead zeroes in on a new Wood McKenzie study predicting that the Asia Pacific region will add 43 gigawatts of new offshore wind by 2027, and that China alone will add 31 gigs, up from 2 gigs in 2017. So the rate of increase here is over 15 times and that is impressive.

But still, the big story here is solar, which will grow 8 times more than offshore wind in the region.

This fallacy of focusing on the phenomena which show the greatest rate of growth rather than on those that are, like, the hugest, is a common one.

Still the 41 gigawatt projection for offshore wind is very impressive. Just for comparison, Germany began developing offshore wind in 2009 and is up to 5.3 gigawatts; it will put in about 7 more gigawatts of offshore wind by 2030. So China has plans for over 4 times as much new offshore wind as veteran wind producer Germany.

The United States, which is very late to this party and has almost no such capacity at the moment, is only expected to put in 22 gigawatts of new offshore wind by 2030, far behind China.

Remember, we are only talking about offshore wind here. China, and Asia more generally, will also be putting in massive amounts of new onshore wind. Offshore wind may have some advantages in that above-ocean wind currents are often steadier and so could help smooth out electricity production.

In the race to address our climate emergency, these huge numbers of new renewable energy-generation, which avoid the emission of billions of tons of the heat-trapping gas, carbon dioxide, are like wings for humanity.

But there is one worry here, which is that China will realize so many technological and economic gains from its renewables revolution that it will leave the rickety old fossil-fuels based United States in the dust. Geopolitics is in part economic competition. China is on the cusp of being the world’s largest economy even in nominal gdp, and if it realizes a 6 percent of gdp savings from renewables (the fuel of which is free) while the US goes on using much more expensive legacy fuels (as the Trump administration insists), Beijing’s rise to the foremost superpower could be accelerated.