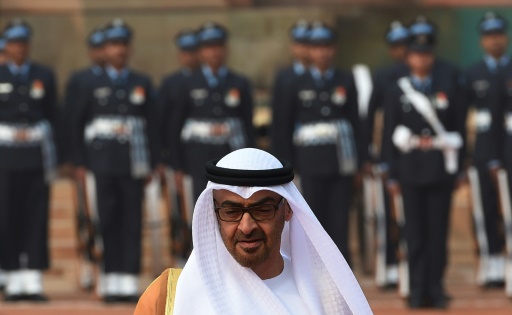 Paris (AFP) – Rights activists filed two complaints in France against a visiting Abu Dhabi prince on Wednesday, accusing him of being complicit in torture as well as in war crimes in Yemen.

The October 2 killing of dissident Saudi journalist Jamal Khashoggi loomed large over the meeting, with US President Donald Trump admitting Tuesday that the Saudi prince may have been behind his brutal murder in Istanbul.

Macron’s office said the French leader and the Abu Dhabi crown prince discussed stability in the Middle East, the war in Yemen and Iran, among other issues, without giving details.

The United Arab Emirates (UAE), of which Abu Dhabi is the capital, is part of the Saudi-led coalition that has been fighting Huthi rebels in Yemen for the past three years.

One of the complaints against the Abu Dhabi prince was brought by three nationals of Saudi arch-foe Qatar, who claimed they had been detained and tortured by UAE security officials between February 2013 and May 2015, according to their lawyer Pierre-Olivier Sur.

The trio said they had been subjected to “physical and psychological torture”, including beatings, sleep deprivation and threats of rape, hanging and death, Sur said in a statement.

The second complaint, for “complicity in torture and war crimes” in Yemen, was brought by six Yemenis and the French-based International Alliance for the Defence of Rights and Freedoms.

Nearly 10,000 people have been killed in Yemen since the Saudi-led intervention began, according to the World Health Organization, and 14 million people are at risk of starvation.

The complaint filed in Paris accuses the Saudi-backed coalition of “mass torture, indiscriminate bombings and a blockade leading to a famine,” and says that Prince Mohammed bears responsibility as deputy chief of UAE’s armed forces.

Prince Mohammed did not respond to the allegations.

He was not scheduled to speak to the media during his visit to France.