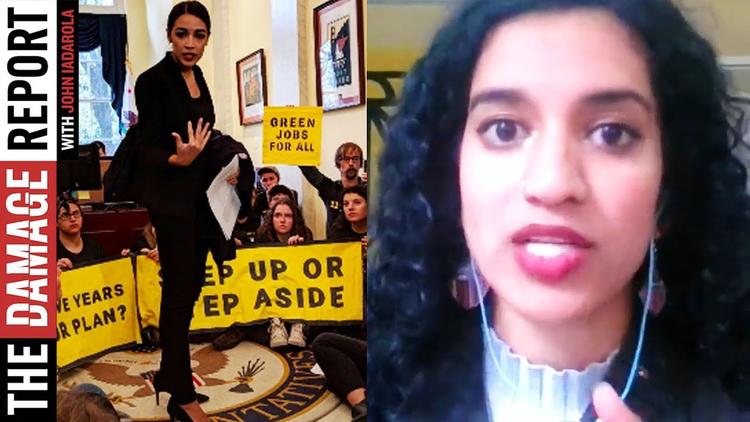 Fifty young people affiliated with the Sunrise Movement were arrested on November 13 in House Minority Leader Nancy Pelosi’s office, following a sit-in demanding that Democrats use their new majority in the U.S. House of Representatives to launch a comprehensive plan to confront climate change — a Green New Deal.

Representative-elect Alexandria Ocasio-Cortez not only attended the protest, but the same day posted on her website draft language to establish a Select Committee on a Green New Deal.

Ocasio-Cortez’s willingness to embrace the dynamic and confrontational mobilization of the Sunrise Movement and their reinvigoration of a public discourse on a Green New Deal signals that the next legislative session will present opportunities to create and elevate an ambitious left agenda.

Ocasio-Cortez’s draft proposal for a Green New Deal Committee contains bold provisions for achieving 100 percent renewable energy, a federal jobs guarantee, a commitment to mitigate racial, regional, and gender-based wealth and income inequalities, and a plan to use innovative public financing to achieve these goals. While these are all important aspects of a Green New Deal, what’s missing are any terms for protecting — let alone strengthening — the right to organize.

One of the key provisions of the original New Deal was the 1935 Wagner Act, which still forms the basis of U.S. labor law today. The intent of the act was to encourage unionization so that workers would have a legal structure and protections in labor disputes with their employers. Congress passed the Wagner Act on the heels of the 1934 strike wave, when thousands upon thousands of workers resolved such disputes through disruptive action.

The Wagner Act recognized that workers and employers did not have the same interests and situated the federal government as a neutral arbiter in the labor disputes that had long been a feature of American capitalism. By regulating this conflict, the Wagner Act paved the way for massive waves of unionization, the legitimacy of collective bargaining, and a broadly shared prosperity by the middle of the 20th century.

Without strong labor protections, a Green New Deal is likely to create the sorts of low-paid, precarious work that has increasingly defined the American job since President Reagan.

This federal neutrality in labor disputes lasted more or less until the Professional Air Traffic Controllers (PATCO) strike in 1981. When the air traffic controllers went on a nationwide strike, President Ronald Reagan demanded the workers return to the control towers or they would be fired. Given the damage this would do the economy, most thought the president was bluffing. He was not. Within two weeks, 11,000 controllers had been dismissed and their jobs taken by military air personnel.

Reagan didn’t only break the strike. He also signaled to the business community that they could move aggressively against their unionized workers and expect the full backing of the president of the United States. In the decades that followed, union density plummeted and ushered in the anti-union era we still live in today.

Any invocation of the New Deal must wrestle with this history. A truly transformational Green New Deal — one that reaches every corner of the economy — must also be rooted in the right to organize. Many of the carbon-intensive industries that have drawn the ire of environmentalists grew alongside and within the New Deal order and the labor protections it provides. By contrast, newer “green economy” jobs emerged just as Reagan began his assault on the labor protections laid out in the New Deal. As a result, the types of jobs that a Green New Deal is likely to create will be the sorts of low-paid, precarious work that has increasingly defined the American job since Reagan’s administration.

For example, it’s nearly impossible for workers in residential solar installation to organize into unions. The residential construction industry is full of small employers, work is very temporary, and workers are often labeled as independent contractors to strip them of any labor protection under the law. Thanks to these conditions of precarity, workers have no job security and wages are low. According to the California Occupation Guides, solar installers make $11.50-$21.00 per hour. Benefits are meager, if they exist at all.

Meanwhile, in sectors where strong worker protections still prevail, green jobs are high-paying jobs. Research from the UC Berkeley Labor Center shows that electricians installing utility-scale solar farms in California benefit from strong labor agreements and earn on average, $78,000 per year, or $39 per hour, with good health and pension benefits. Their labor agreements also include apprenticeship programs that allow a paid training pathway to these remunerative careers as electricians.

Without strong worker protections, including the right to organize, a Green New Deal will both exacerbate income inequality and alienate a vital constituency. If this crucial piece is omitted from Ocasio-Cortez’s bold platform, the left will be left wondering why the working class isn’t happy about their new low-wage green jobs.

Lauren Burke is an Atlantic Fellow for Social and Economic Equity. She works on labor-led climate initiatives with the Labor Network for Sustainability. Previously, she was a worker organizer with UNITE HERE! for over a decade.