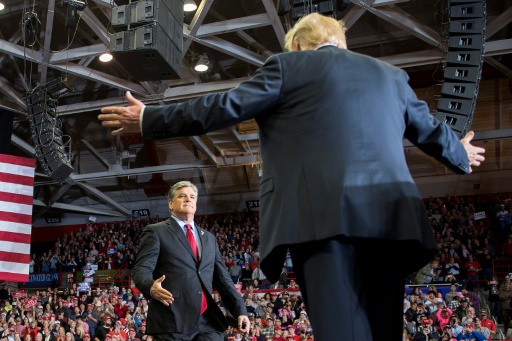 New York (AFP) – Fox News admitted Tuesday it was a mistake for its star news host Sean Hannity to speak at a campaign event with President Donald Trump, saying it was an “unfortunate distraction” which “has been addressed.”

Hannity, who has interviewed Trump on several occasions on Fox and is believed to be close to the White House, offered effusive praise for the president while echoing his concerns about what he termed “fake news” media reports.

Fox, controlled by Trump ally Rupert Murdoch and often praised by the president, said it was wrong for one of its journalists to become part of a political event.

“Fox News does not condone any talent participating in campaign events,” the cable news channel said in a statement to AFP.

“We have an extraordinary team of journalists helming our coverage tonight and we are extremely proud of their work. This was an unfortunate distraction and has been addressed.”

Fox offered no details on what it meant by “addressed.”

The statement made no mention of another Fox host, former judge Jeanine Pirro, who was also on stage at the Missouri event.

On Twitter, Hannity claimed his appearance was not planned and that he went onstage after a request from Trump: “When the POTUS invited me on stage to give a few remarks last night, I was surprised, yet honored by the president’s request.”

At the rally, Hannity offered a Trump-like view of the mainstream news media, telling the crowd, “By the way all those people in the back are fake news.”

He said later on Twitter he was not referring to Fox News journalists, maintaining that “they do amazing work day in and day out in a fair and balanced way.”

AFP/File / Jim WATSON. Fox News said its journalists should not participate in political events after its star host Sean Hannity appeared with Donald Trump at a Missouri political rally.