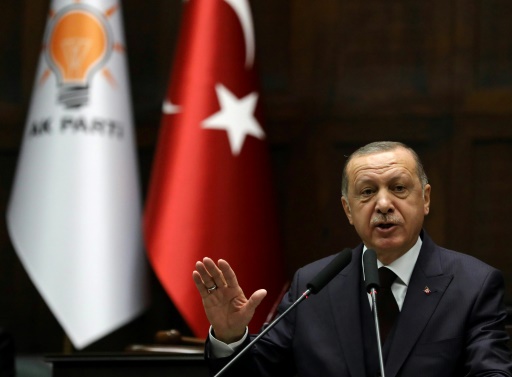 “They listened to the conversations which took place here, they know,” he said, but added that they were not accompanied by any written documents.

Erdogan gave no details of the tapes’ specific content in his televised address.

Khashoggi was last seen entering the consulate on October 2 to obtain documents for his forthcoming marriage.

After repeated denials, Saudi Arabia finally admitted the 59-year-old had been murdered at the mission in a “rogue” operation.

Turkish pro-government daily Sabah earlier Saturday reported Khashoggi’s killers poured the remains of the insider-turned-critic of Riyadh down the drain after dissolving him in acid.

Samples taken from the consulate drains showed traces of acid, Sabah said without quoting sources for its story.

Erdogan, who was heading to France to attend commemorations marking the 100th anniversary of the end of World War I, has accused the “highest levels” of the Saudi government of ordering the hit.

Some officials have pointed the finger at the all-powerful Crown Prince Mohammed bin Salman and some analysts say Ankara is keen to have the heir sidelined from the nexus of power in Riyadh.

Erdogan has not accused the prince but has said he does “not believe for a second” that King Salman ordered the crime. 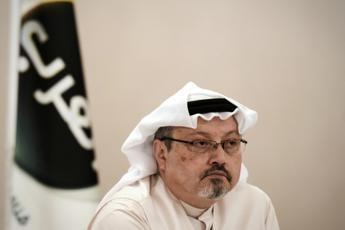 AFP/File / MOHAMMED AL-SHAIKH. According to pro-government daily Sabah, Khashoggi’s killers poured the remains of the insider-turned-critic of Riyadh down the drain after dissolving him in acid.

Some Turkish media and officials had said for weeks that Ankara possessed an audio recording of the murder and had shared it with CIA head Gina Haspel when she visited Turkey late last month.

But the existence of such a recording had not been officially confirmed.

Khashoggi’s body has not been found, more than a month after the Washington Post columnist was killed.

Yasin Aktay, an advisor to Erdogan, suggested last week that the body may have been dissolved.

The Istanbul prosecutor found on October 31 that Khashoggi had been killed and dismembered.

Erdogan has demanded greater cooperation from Riyadh in investigating the affair amid distrust between the two nations after the Saudis’ initial denials that Khashoggi was dead.

The Turkish leader insisted Saturday that the 15-member Saudi delegation sent to the consulate “know very well the murderer or murderers.”

“The Saudi authorities should succeed in revealing that by making them speak,” Erdogan added.

Ankara has been demanding, to date without success, the extradition of those involved in the killing.

Before heading to France, Erdogan said he had prior to his news conference spoken by telephone to US President Donald Trump and would meet with the US leader in Paris “if we find the opportunity.”

Trump and Erdogan have previously spoken by phone on the case of Khashoggi, who went into US exile last year after openly criticising Prince Mohammed’s growing crackdown on dissent.

With Riyadh a key regional ally, Washington has to date given the Saudi heir the benefit of the doubt on the affair while demanding answers.

Featured Photo: AFP/File / ADEM ALTAN. Turkish President Recep Tayyip Erdogan did not reveal specific details of the audio recordings but said he had discussed the latest developments in the Khashoggi case with US President Donald Trump.